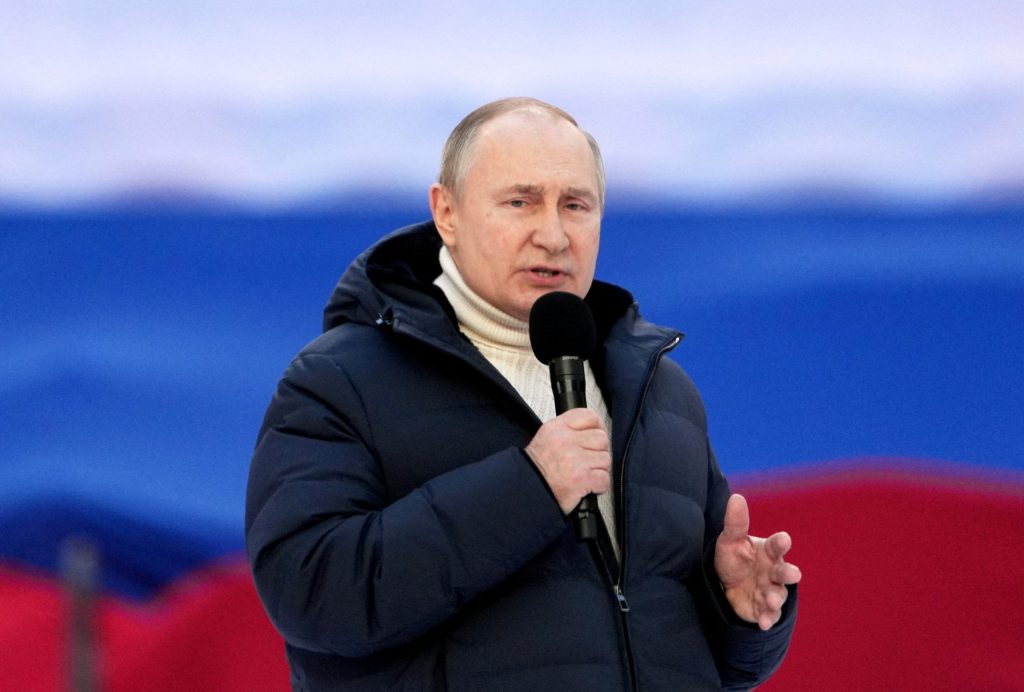 Despite detailed advance warnings of Vladimir Putin’s plans for a major war in Ukraine, many observers remained in denial until the very last minute over the possibility of a full-scale Russian invasion. With the war now entering its second month, this sense of disbelief lingers on and is now preventing the international community from grasping the full gravity of the situation in Ukraine.

While Western politicians and commentators continue to discuss off-ramps and compromise settlements, few in Moscow are under any such illusions. Those close to Putin understand that he views the current conflict as a holy war and has long since passed the point of no return. The Russian ruler will settle for nothing less than the complete subjugation of Ukraine or the destruction of the country.

The terrifying scale of Putin’s war aims in Ukraine may seem unthinkable to most rational outside observers, but they make perfect sense when viewed through the prism of his toxic worldview.

Throughout his reign, Putin has been driven by a deep-seated resentment of Russia’s post-Soviet decline and a burning desire to revive the country’s superpower status. Far from wishing to reestablish the USSR, he embraces traditional Russian nationalism and dreams of recreating the autocratic empire of the Czars.

Putin sees the collapse of the Soviet Union as “the demise of historical Russia” and has frequently complained that the post-Soviet settlement cut millions of Russians off from their motherland while robbing Russia of its rightful heartlands. This sense of grievance has fueled Putin’s obsession with Ukraine, a country whose entire existence has come to represent the alleged injustice of the post-1991 world order.

Putin is not the first Russian ruler to deny Ukraine’s right to exist. On the contrary, Ukraine denial is a common thread running through Russian history that stretches back hundreds of years and remains widespread in today’s Russia. However, few have ever embraced this doctrine of denial as fervently as Putin, who has made clear that ending Ukrainian independence is a sacred mission which will define his place in history.

The current war is merely the latest and most dramatic stage in this long-term campaign. Putin’s first bid to end Ukrainian independence came in 2004 and saw him personally visit Kyiv on the eve of the country’s presidential election to campaign for the pro-Kremlin candidate. This hubristic intervention backfired disastrously, enraging millions of otherwise apolitical Ukrainians and helping to spark mass pro-democracy protests that came to be known as the Orange Revolution.

Ukraine’s embrace of democracy and historic turn towards the West in the years following the Orange Revolution infuriated Putin and further convinced him of the need to reassert Russian control over the country. Haunted by the people power uprisings that swept through Central Europe in the late 1980s and triggered the disintegration of the Soviet Empire, he saw Ukraine’s democratic awakening as a Western plot and a direct threat to his own authoritarian regime.

When new pro-democracy protests gripped Ukraine a decade later, Putin acted decisively. In the immediate aftermath of the 2014 Euromaidan Revolution, he seized Crimea and launched a proxy war in eastern Ukraine.

In the eight years between the invasion of Crimea and the onset of today’s full-scale invasion, the conflict in eastern Ukraine settled into a bloody stalemate while relations between Russia and the West fell into a downward spiral. During this period, Putin’s refusal to seek compromises and his readiness to embark on a new Cold War underlined the overriding importance he attached to Ukraine. Any remaining doubts in this regard were removed on February 24 when Russian troops launched the largest European invasion since World War II.

Putin has made no secret of his Ukraine obsession. Indeed, he has repeatedly sought to explain why he believes Ukrainian statehood is both an accident and a crime. In a 7,000-word July 2021 essay entitled “On the Historical Unity of Russians and Ukrainians,” Putin argued that Ukrainians were in fact Russians and dismissed the entire notion of a separate Ukrainian identity. “I am confident that the true sovereignty of Ukraine is possible only in partnership with Russia,” he concluded.

In a series of lengthy anti-Ukrainian diatribes delivered on the eve of the current war, Putin went even further, condemning the entire country as an illegitimate “Anti-Russia” that could no longer be tolerated.

Putin’s personal attacks on Ukraine have been accompanied by years of relentless Kremlin propaganda designed to dehumanize Ukrainians. Since 2014, Russian TV audiences have been spoon-fed a daily diet of grotesque lies depicting Ukrainians as the modern-day successors to Hitler’s Nazis. The obvious absurdity of leveling such accusations against a country with a popularly elected Jewish president where far-right parties routinely struggle to secure 1% of the vote has not prevented millions of Russians from enthusiastically embracing dark fantasies of a fascist Ukraine.

This poisonous propaganda has paved the way for the war crimes currently taking place in Ukraine. The Russian public has been primed to see Ukraine as part of Russia and encouraged to view any Ukrainians who disagree as traitors or Nazis. The entire notion of Ukrainian identity has been demonized and equated with the worst criminals in world history. Unsurprisingly, all the available evidence indicates strong Russian public support for an invasion that has shocked and appalled audiences elsewhere around the world.

The crimes against humanity witnessed during the first month of Russia’s invasion are just the beginning. By delegitimizing the Ukrainian state and dehumanizing Ukrainians, Putin has set the stage for a war of annihilation. Thousands of civilians have already been slaughtered in the carpet bombing of Ukrainian towns and cities. Residential buildings, schools, hospitals, and makeshift bomb shelters have all been deliberately targeted in what appears to be a Russian campaign to maximize civilian casualties.

Meanwhile, accounts of arrests in areas under Russian occupation appear to confirm pre-invasion fears over the existence of Kremlin “kill lists.” A growing number of elected officials, journalists, activists, former military servicemen and religious leaders have been abducted by Russian forces in a sinister echo of Stalin-era terror tactics.

On the front line of the conflict, civilians fleeing bombardment in besieged cities have reportedly been forced to pass through filtration camps designed to identify anyone with pro-Ukrainian sympathies. In a country where patriotic feeling is running at all-time highs, this could easily include many millions of Ukrainians.

As the war drags on, atrocities will only escalate. Russian troops groomed to view Ukrainians as less than human and radicalized by the deaths of comrades will become less and less inclined to differentiate between civilians and enemy combatants, while Ukraine’s refusal to surrender and the country’s continued resistance will be used to justify savage reprisals. All of the necessary elements are in place for war crimes comparable to the worst excesses of the totalitarian twentieth century.

In order to stop Putin, he must be defeated. Anything less will merely create a temporary pause before the next attempt to destroy Ukraine. For the international community, this means declaring total economic war on Russia while dramatically increasing arms deliveries to Ukraine.

During the first four weeks of the war, the Ukrainian military has proven itself more than a match for the Russian invaders. While Putin’s force enjoys overwhelming superiority in terms of manpower and firepower, the Russian army appears to be poorly led and is increasingly demoralized. In contrast, Ukraine’s defenders have fought with striking tenacity and skill. As a result, Russia has failed to achieve any of its key military objectives and has suffered catastrophic losses. If they are provided with the right weapons in sufficient quantities, Ukraine can absolutely win this war.

Russia must be bankrupted as well as bloodied. International sanctions imposed since the start of the war have been in many ways unprecedented but they remain woefully insufficient. It is vital to understand that Putin is prepared to suffer considerable economic pain in order to achieve his historic goal of crushing Ukraine. Rather than seeking to deter the Kremlin, the goal must be to completely cut the country off from the global economy and deprive Russia of the revenues it needs to finance the war.

In order to achieve this, Western leaders will need to accept that their own countries must also pay a significant price. German Chancellor Olaf Scholz has warned that a ban on Russian energy imports would mean a European recession. He must urgently wake up to the fact that the alternative is a European genocide.

In recent years, claims of genocide have lost much of their potency due to frequent political exploitation, not least by Putin himself in the run-up to the current war. Nevertheless, it remains the most serious accusation that can be leveled at any state. In the case of Russia’s war in Ukraine, warnings of a looming genocide are more than justified.

Putin himself has stated again and again that he does not recognize Ukraine’s right to exist. The criminal actions of his military are now entirely in line with the chilling logic of his words. Unless Putin is decisively defeated in Ukraine, he will destroy the country. If the West stands by and allows this to happen, the world will never be the same again.

Peter Dickinson is Editor of the Atlantic Council’s UkraineAlert Service. This article is based on an address delivered by the author to Swiss members of parliament at the Federal Palace in Bern on March 15.