Liberation Day, Victory Day, VE-Day: Victory over Nazi Germany and the end of World War II in Europe has many names. In some countries, like France and Slovakia, it is a national holiday. In Germany, it is a day of remembrance. After 12 years of brutal dictatorship, nearly six years of war, 60 million dead and six million systematically murdered Jews, Nazi Germany was finally defeated on May 8 and the war in Europe was over.

The aggressor’s unconditional surrender was assured more than once — thus the reason different countries mark the end of the war on different days. Colonel General Alfred Jodl, chief of the operations staff of the German Armed Forces High Command, signed a surrender agreement with Allied forces on the night of May 6/7, 1945, in Reims, France.

The surrender went into effect at 11:01 pm, May 8, 1945. Soviet dictator Joseph Stalin, seeking to cement his control on the eastern front, secured the signature of Field Marshal Wilhelm Keitel, chief commander of the German Armed Forces High Command, on an act of surrender at Soviet headquarters in Berlin-Karlshorst just after mignight. That is why Russia has traditionally commemorated the end of hostilities on May 9. In the Netherlands, the end of German occupation is known as “Bevrijdingsdag” and celebrated on May 5. 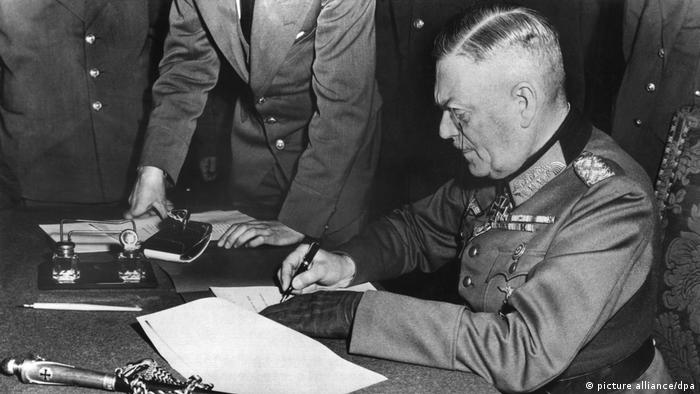 Germany has long grappled with the meaning of May 8

Germany, the country that organized and perpetrated the horrors of the war, has needed a long time to arrive at a solution for how to deal with May 8. For the general population, capitulation signaled what became known as “zero hour.” Initially, no one wanted to look back at what had happened. The day simultaneously symbolized defeat and liberation — at the time it was simply too complicated for the young postwar republic to grapple with. The newly formed German Democratic Republic (GDR) in East Germany, on the other hand, pursued a Soviet path, viewing itself as an anti-fascist successor state bearing no responsibility whatsoever for the crimes committed by Nazi Germany. In fact, for years May 8 was an official state holiday in East Germany.

In West Germany, the Federal Republic (FRG) sought to keep its distance from the concept of a liberation day. Four years after the end of the war, the republic’s first chancellor, Konrad Adenauer, is said to have proposed ratifying the fledgling country’s Basic Law on May 8, 1949. In a dossier from parliamentary debate at the time, Germany’s Federal Agency for Civic Education quotes Adenauer as saying: “It is in truth, the first happy day for us Germans since the year 1933. We want to reckon from then on and not from the collapse, as difficult as the years of the collapse were.”

German President Richard von Weizsäcker was not the first person to point to May 8 as a “Day of Liberation” from the inhumane and tyrannical system of National Socialism. Still, when he did so in a historic 1985 speech marking the 40th anniversary of the end of the war, it resonated, becoming part of Germany’s collective memory and reminding every German of their obligation to ponder their own individual guilt and personal responsibility. In 2020, May 8, traditionally observed as a day of somber remembrance, was celebrated as a one-time federal holiday to mark the 75th anniversary of the end of the war. There has been much discussion, both before and after 2020, about permanently establishing May 8 as a federal holiday.

Putin rewriting the meaning of May 9

In Russia, “Victory Day,” as it is referred to in the post-Soviet era, was for decades a day of sorrowful remembrance. The Soviet Union lost millions of its citizens during the Second World War, May 9 was a day to reflect upon that loss. Yet, that has changed over the past several years. Increasingly, President Vladimir Putin has used the day to serve his own domestic purposes. In 2020, a study by the German Institute for International and Security Affairs (SWP) found that under Putin, Soviet history has increasingly been told from a one-sided perspective in order to make the current regime appear stronger as well as casting it as a natural continuation of the former Soviet super power. 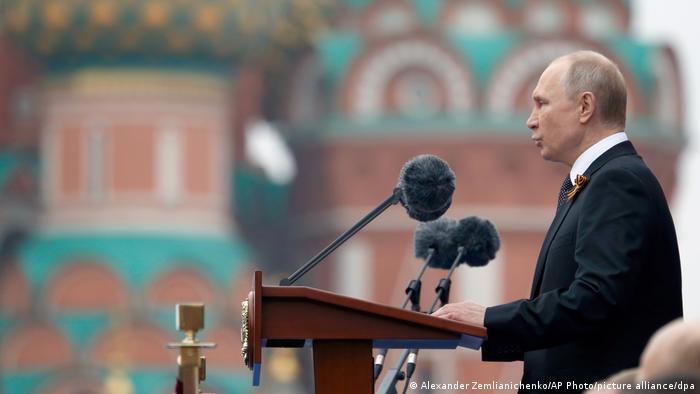 Vladimir Putin uses May 9 to address the people of Russia, as here in 2019

For instance, under Putin, Russia has once again begun staging pompous military parades on May 9. In Moscow’s Patriot Park, one can visit a military cathedral complete with mosaics depicting the Red Army as well as newer wars in Georgia and Syria. At last year’s military parade, Putin said: “Russia tirelessly defends international law. At the same time, we will valiantly defend our own national interests in order to guarantee the security of our people. Russia’s brave armed forces, descendants of the victorious, are the faithful guarantor for the country’s development and the wellbeing of Russian families.”

It therefore makes sense that he began referring to Ukraine as “fascist” back in 2014, long before his February 24, 2022, invasion, attempting to create a construct framing Russia’s neighbor as a continuation of the Nazi era. DW’s veteran Russia expert Ingo Mannteufel has been closely observing this development: “Putin and the Russian state propaganda machine have made the historic capitulation of Nazi Germany on May 9, 1945, a central narrative for the Kremlin’s current political actions,” he says. “The Soviet victory over Nazi Germany is being instrumentalized as a way to justify the war of aggression launched against Ukraine on February 24. With that, May 9 has lost its function as a historical reminder of the suffering of millions of people and has become an aggressive instrument of propaganda for Putin’s Russia.”

Fear of an expansion of the war in Ukraine

As a result, speculation that Putin might use this May 9 as an opportunity to put propaganda in the war against Ukraine into overdrive, has been building for weeks. Christian Democratic Union (CDU) foreign policy expert Roderich Kiesewetter, for instance, speaks for many when expressing fear of a general mobilization in which Putin could win over tens of thousands of new recruits for the war effort. Ukrainian intelligence services have warned that Russia could be planning to stage a large-scale military parade in the largely occupied Ukrainian port city of Mariupol. Thus, May 9 could indeed become a pure propaganda instrument rather than a day of remembrance. Ukrainians and even Russians living in the West are trying to put up resistance, however. A broad alliance of groups in Berlin has called for events and demonstrations at which organizers vow to stand up for responsible historical remembrance and peace.

Berlin’s Museum Karlshorst is also planning commemorations — namely a church service and a “peace vigil.” Karlshorst is the site at which the act of unconditional surrender was signed in the final hour of May 8, 1945. Several days ago, the museum decided to change its name and is no longer known as the German-Russian Museum — a Ukrainian flag now flies above its doors.

This article was translated from German

While you’re here: Every Tuesday, DW editors round up what is happening in German politics and society. You can sign up here for the weekly email newsle