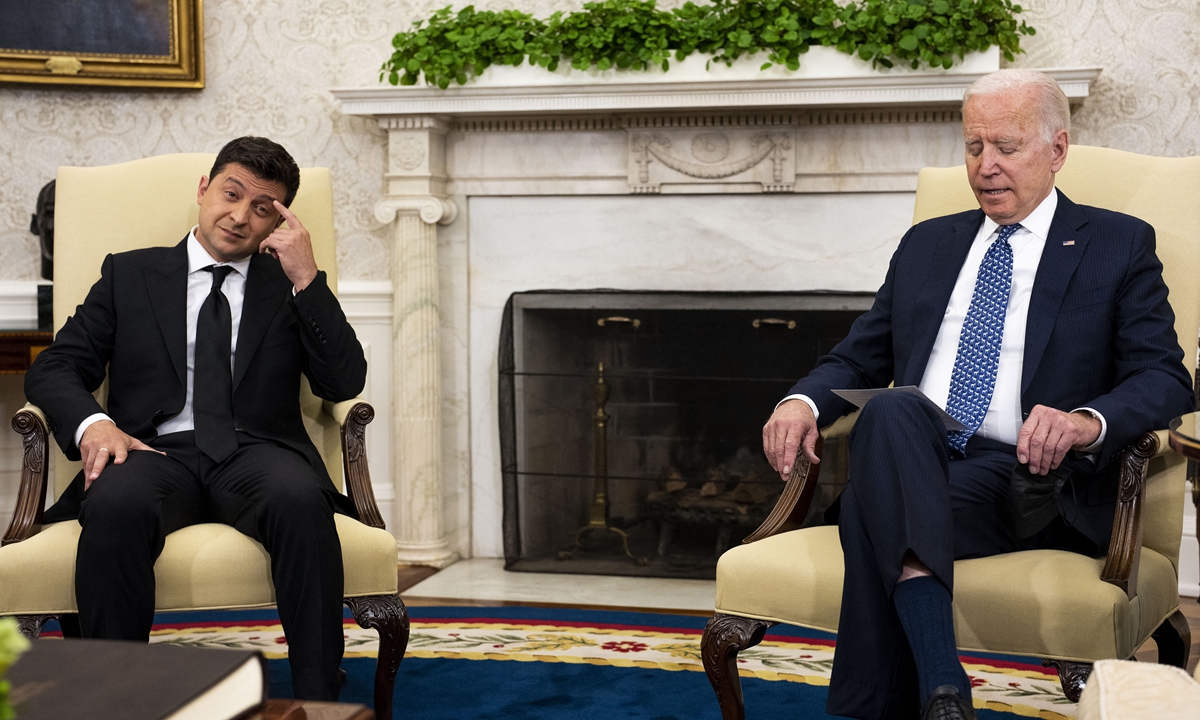 Ukrainian President Volodymyr Zelensky (L) meets with US President Joe Biden in the Oval Office at the White House on September 01, 2021 in Washington, DC. Photo: AFP

During Ukrainian President Volodymyr Zelensky’s visit to the US, the two countries’ defense ministers signed the Strategic Defense Framework that “creates a foundation for the enhancement of US-Ukraine strategic defense and security cooperation,” according to a White House statement on Wednesday. This is an important milestone for the US-Ukraine relationship, taking their security cooperation to the strategic partnership level.

The Strategic Defense Framework reaffirms the key principles and sets out the ambitious goals of bilateral relations in the field of defense, including Ukraine’s aspirations to join NATO.

This means that US-Ukraine military relations have entered a new phase. The US remains the world’s strongest military power and has long been viewed by European countries as the most important military partner and a key counterweight to Russia. After the Ukraine crisis, Kiev has not only pursued a lopsided pro-Western policy, enshrining gaining full membership in the European Union and NATO in its Constitution, but also been seeking to strengthen security cooperation with the US. Washington’s position is of great significance to Kiev on its membership in NATO. So Ukraine has been improving and upgrading military relations as one of the priorities of its diplomacy with the US.

Although the Strategic Defense Framework imposes no obligations on either side as a military ally, it does reaffirm US ‘support for Ukraine’s sovereignty and territorial integrity. It also provides technical details of military cooperation, and establishes a secure line of communication between the two countries.

Before Zelensky’s meeting with US President Joe Biden on Wednesday, a senior US administration official remarked at a press briefing that “Biden will announce his approval for a new $ 60 million security assistance package for Ukraine.” The package will include more Javelin anti-tank missiles.

At a time of continuous tensions between the US and Russia, expanding military assistance to Ukraine serves to strengthen Washington’s hand in its game with Moscow, bolstering its strategic influence in Europe. Ukraine will receive not only military aid but also security confidence and diplomatic support from these gestures. Closer military ties with the US are an important diplomatic gain for Zelensky.

However, there has always been a strategic red line in military cooperation between the US and Ukraine: At least in the short term, NATO will not accept Ukraine as a member. More than 30 years after the end of the Cold War, the US and Russia still have enough nuclear weapons to destroy the earth. Maintaining nuclear security has always been an important part of the US-Russia relationship. Even though the US values ​​Ukraine’s unique geopolitical role, it is also aware that issues about Ukraine is included in Russia’s strategic red line. It is known that NATO membership could provoke a strong reaction from Moscow.

Such being the case, the US attitude toward Ukraine has always been bold in words but cautious in practice. From Trump to Biden, Washington has been reluctant to get directly involved in the Ukraine affair. Instead, both administrations have pushed the European Union to the forefront of the game with Russia.

Biden has repeatedly stressed the need to maintain a “stable, predictable” relationship with Russia. Therefore, the military cooperation between the US and Ukraine must follow the principle of avoiding touching the red line of US-Russia relations. This decided that NATO will not accept Ukraine in the short term.

Against the backdrop of US ‘hasty withdrawal from Afghanistan, the Strategic Defense Framework with Ukraine is more of a formality, with its substantive meaning remaining to be seen. US military cooperation with Ukraine will not change the geopolitical balance of power in Eurasia region. Instead, this is more of a diplomatic show by the Biden administration.

The author is an associate research fellow at the Institute of Russian, Eastern European & Central Asian Studies of the Chinese Academy of Social Sciences. opinion@globaltimes.com.cn