Kyiv, Ukraine – Ukraine civilian fighters and residents in the capital are preparing for a major attack as Russian forces surround the city with troops and artillery just kilometers away.

Air-raid sirens rang out across the capital region on Saturday as rocket barrages sent residents running for shelter. Fighting erupted in multiple areas around Kyiv.

For Yurii Malinskiyi, the war has become painfully personal after his youngest brother was killed by Russian rocket fire four days ago. A former air force officer, he left his job as a truck driver in the Netherlands to join Ukraine’s civil defense and fight against the Russian invaders.

“I recognized my brother only from his clothes; There was no other way of recognizing him, ”Malinskiyi told Al Jazeera, standing on a street in front of a large barricade of tires.

Satellite images taken on Thursday by a United States-based company indicated the 64km-long (40 miles) Russian army convoy – stationed outside Kyiv for nearly two weeks – has dispersed around the capital, possibly preparing for a full-out attack.

The column of vehicles, tanks and artillery was now less than 25km (11 miles) away and slowly moving towards Kyiv. 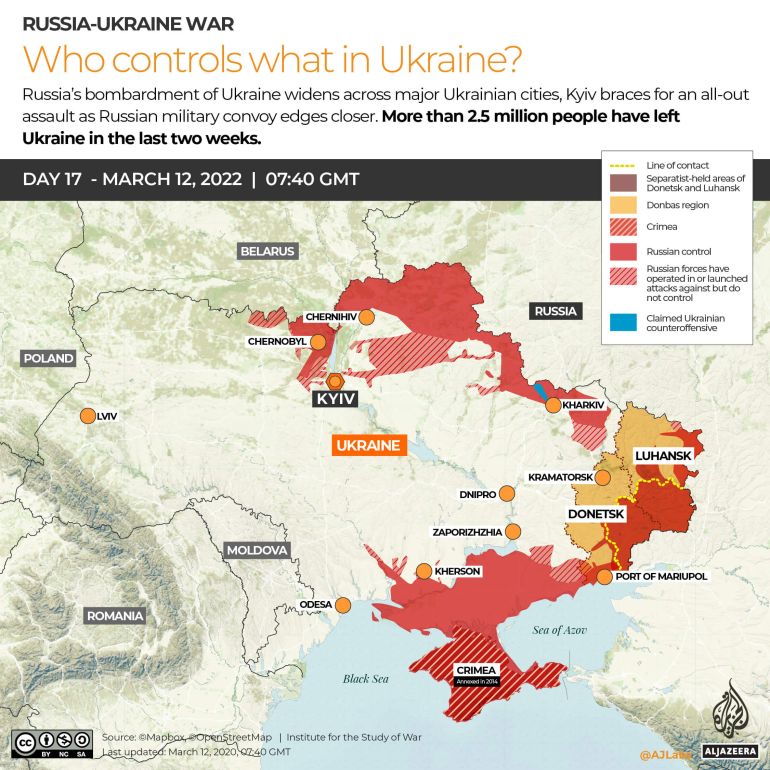 Battle for the future

Kyiv has turned into a fortress and many volunteers have joined the fight. Men who just two weeks ago sat in offices or worked in construction are now preparing to defend their capital.

With Kyiv the main target of Russian President Vladimir Putin’s “special military operation”, civilians who remain in the city are bracing themselves.

Alyona Kimlach helps the elderly and sick who cannot leave their apartments or are simply too afraid to go out, to get food. She brought groceries for 95-year-old Alla Savichna, who has seen more than enough war in her life.

“What is the point for me to leave [Kyiv] at my age, especially if you see how I walk? I had two surgeries; I broke my hip, ”Savichna told Al Jazeera. “I haven’t been to the street in 10 years… I want to die in my bed.”

Kimlach said she could not decide if she should leave Kyiv with her eight-month-old daughter and go on a long and unpredictable journey, but added the constant shelling and sirens were making her extremely nervous.

She said she can only hope the Ukrainian defenses will hold.