Russian forces have made minimal progress against Ukraine in recent days. Unlike the invader, gold rallied very quickly and achieved its long-awaited target – $ 2000!

Nobody expected the Russian inquisition! Nobody expected such a fierce Ukrainian defense, either. Of course, the situation is still very dramatic. Russian troops continued their offensive and – although the pace slowed down considerably – they managed to make some progress, especially in southern Ukraine, by bolstering air defense and supplies. The invaders are probably preparing for the decisive assault on Kyiv. Where Russian soldiers can’t break the defense, they bomb civilian infrastructure and attack ordinary people, including targeting evacuation corridors, to spread terror. Several Ukrainian cities are besieged and their inhabitants lack basic necessities. The humanitarian crisis intensifies.

However, Russian forces made minimal ground advances over recent days, and it’s highly unlikely that Russia has successfully achieved its planned objectives to date. According to the Pentagon, nearly all of the Russian troops that were amassed on Ukraine’s border are already fighting inside the country. Meanwhile, the international legion was formed and started its fight for Ukraine. Moreover, Western countries have recently supplied Ukraine with many hi-tech military arms and equipment, including helicopters, anti-tank weapons, and anti-aircraft missiles, which could be crucial in boosting the Ukrainian defense.

What does the war in Ukraine imply for the precious metals? Well, gold is shining almost as brightly as the Ukrainian defense. As the chart below shows, the price of the yellow metal has surged above $ 1,980 on Monday (March 7, 2022), the highest level since August 2020. 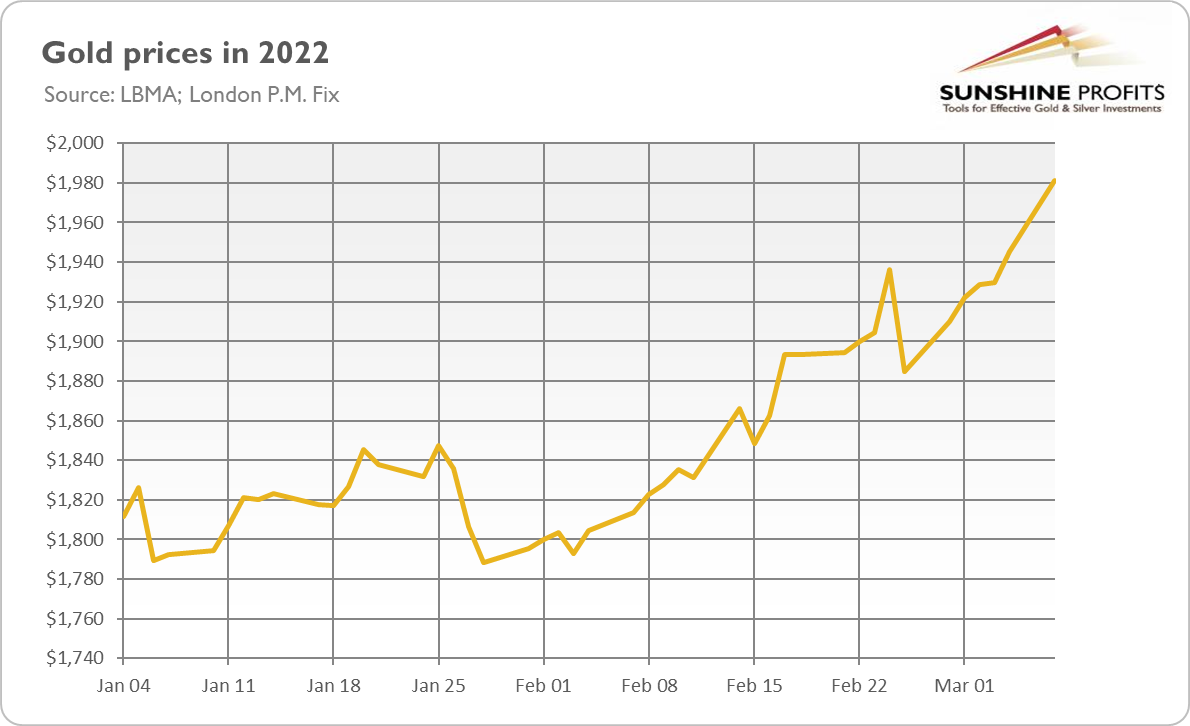 What’s more, as the next chart shows, during today’s early trading, gold has soared above $ 2,020 for a while, reaching almost an all-time high.

In my most recent report, I wrote: “as long as the war continues, the yellow metal may shine (…). The continuation or escalation of Russia’s military actions could provide support for gold prices. ” This is exactly what we’ve been observing.

This is not surprising. The war has increased the safe-haven demand for gold, while investors have become more risk-averse and have continued selling equities. As you can see in the chart below, the S&P 500 Index has plunged more than 12% since its peak in early January. Some of the released funds went to the gold market. 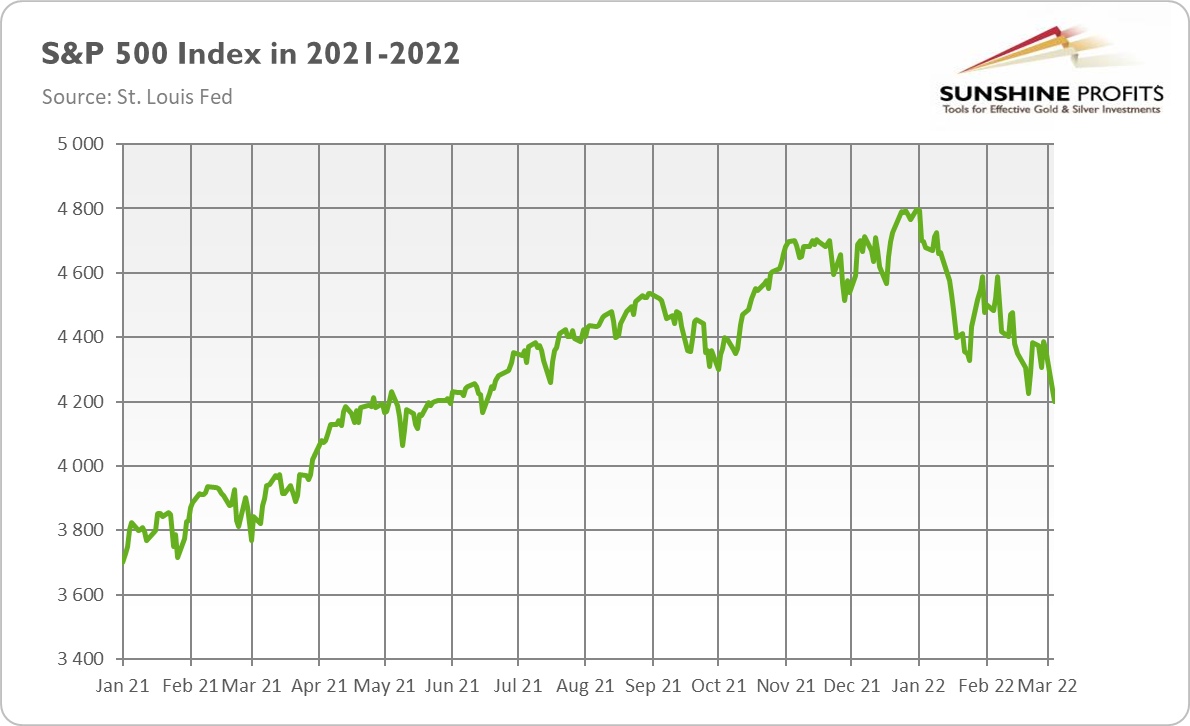 What’s more, the credit spreads have widened, while the real interest rates have declined. Both these trends are fundamentally positive for the yellow metal. Another bullish driver of gold prices is inflation. It’s already high, and the war in Ukraine will only add to the upward pressure. The oil price has jumped above $ 120 per barrel, almost reaching a record peak. Higher energy prices would translate into higher CPI readings in the near future. Other commodities are also surging. For example, the Food Price Index calculated by the Food and Agriculture Organization of the United Nations has soared above 140 in February, which is a new all-time high, as the chart below shows. Higher commodity prices could lead to social unrest, as was the case with the Arab Spring or recent protests in Kazakhstan. 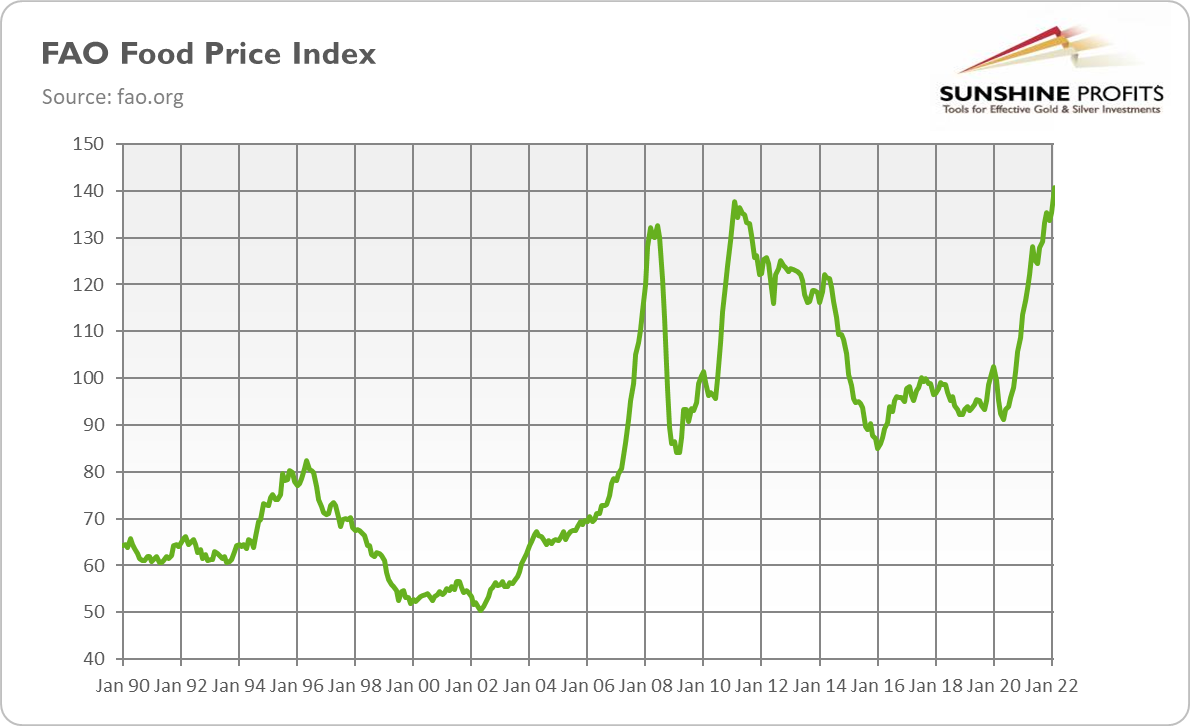 Higher energy prices and inflation imply slower real GDP growth and more stagflationary conditions. As a reminder, in 2008 we saw rapidly rising commodities, which probably contributed to the Great Recession. In such an environment, it’s far from clear that the Fed will be very hawkish. It will probably hike the federal funds rate in March, as expected, but it may soften its stance later amid the conflict between Ukraine and the West with Russia and elevated geopolitical risks. The more dovish Fed should also be supportive of gold prices.

However, when the fighting cools off, the fear will subside, and we could see a correction in the gold market. Both sides are exhausted by the conflict and do not want to continue it forever. The Russian side has already softened its stance a bit during the most recent round of negotiations, as it probably realized that a military breakthrough was unlikely. Hence, when the conflict ends, gold’s current tailwind could turn into a headwind.

Having said that, the impact of the conflict may not be as short-lived this time. I’m referring to the relatively harsh sanctions and high energy prices that may last for some time after the war is over. . The same applies to a more hawkish stance toward Russia and European governments’ actions to become less dependent on Russian gas and oil. A lot depends on how the conflict will be resolved, and whether it brings us Cold War 2.0. However, two things are certain: the world has already changed geopolitically, and at the beginning of this new era, the fundamental outlook for gold has turned more bullish than before the war.