A Russian soldier who pleaded guilty to murdering an unarmed 62-year-old civilian has been sentenced to life in prison in the first war crimes trial of the conflict.

Sergeant Vadim Shishimarin was accused of shooting an unarmed resident through an open car window in the village of Chupakhivka.

The 21-year-old Russian tank commander pleaded guilty at a Kyiv district court to firing shots at a man on 28 February, which was just four days after the Russian invasion started.

Shishimarin, who was wearing a blue and gray hooded sweatshirt, watched proceedings silently from a reinforced glass box in the courtroom this morning.

He showed no emotion as the verdict was read out.

Ukrainian state prosecutors said the soldier was among four other Russian servicemen who fired at and stole a privately owned car in order to escape after their column was targeted by Ukrainian forces.

When they arrived in Chupakhivka, which is located about 200 miles east of Kyiv, they saw a man cycling and talking on his phone.

They said Shishimarin was ordered by another serviceman to kill the civilian to prevent him from raising the alarm on Russians being in the village.

Shishimarin then killed the civilian just meters from his home after he fired several shots through the open window of the car with an assault rifle at the man’s head.

‘I was ordered to shoot’ 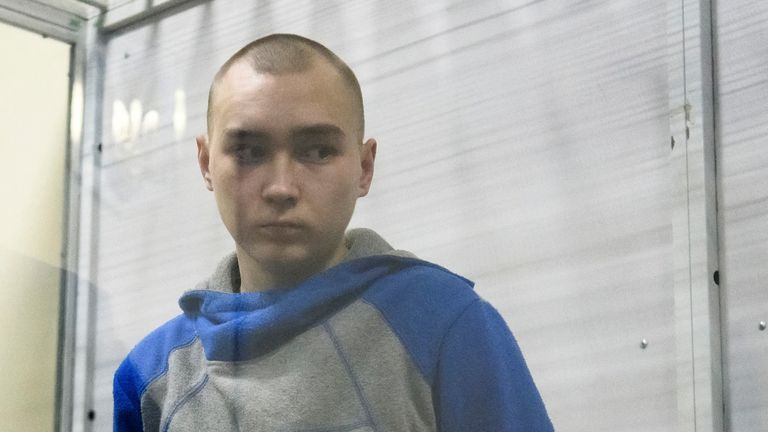 The Security Service of Ukraine, which is known as the SBU, posted a video earlier this month of Shishimarin describing how he shot the man.

The soldier’s defense lawyer, called Viktor Ovsiannikov, told the court that Shishimarin had initially refused to fire the shots, but was given the order twice and so carried out the shooting out of fear for his own safety.

He added that only one out of three or four rounds had hit the target.

Mr Ovsiannikov said: “He was sitting at the window of a car … the car was moving at high speed with a punctured tire.

“I personally think that it shouldn’t be this young man in the dock, but the senior leadership of the other country that I think is guilty of unleashing this war.”

Shishimarin was prosecuted under a section of the Ukrainian criminal code that addresses the laws and customs of war.

The trial has had huge symbolic significance for Ukraine, which has accused Russia of atrocities and brutality against civilians during the invasion.

It also said it has identified more than 10,000 possible war crimes.

Moscow also accused Kyiv of staging the atrocities in a bid to smear its forces.

The Kremlin has not immediately commented on the verdict of the trial.