Finland and Sweden have formally submitted their applications to join NATO at a “historic moment” driven by security concerns over Russia’s invasion of Ukraine.

The applications will now be considered by the 30 member countries of the military alliance, with the process expected to take a few weeks.

Announcing the move after receiving their letters, NATO Secretary General Jens Stoltenberg said: “This is a historic moment, which we must seize.

“I warmly welcome the requests by Finland and Sweden to join NATO. You are our closest partners and your membership in NATO will increase our shared security. “

The entire membership process usually takes around eight to 12 months, but given the threat from Russiathe two Nordic countries could become members within a couple of months if their applications are approved swiftly.

Canada has said it expects to ratify its accession protocol in just a few days.

Finland had since the Second World War maintained a policy of neutrality regarding Russia, with which it shares a 830 mile (1,340km) border. Its neighbor Sweden, which shares a maritime border with Russia, has also traditionally kept a neutral stance.

Both countries have for decades considered that joining NATO would represent an unnecessary provocation of Moscow.

However, public opinion in both countries has shifted massively in favor of membership since Russia invaded Ukraine on 24 February. 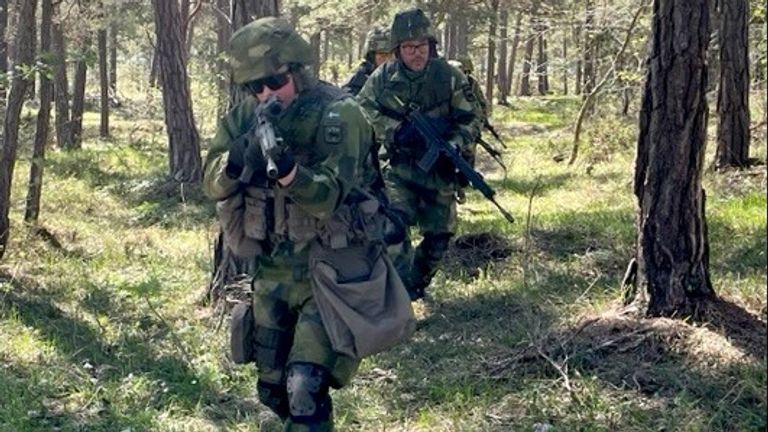 • The Russian army is allegedly holding more than 3,000 civilians from the besieged port city of Mariupol at a former penal colony in the Donetsk region in eastern Ukraine, according to Ukraine’s human rights ombudsman Lyudmyla Denisova
• The UK and fellow G7 nations are looking at how Russian assets can be used to fund the rebuilding of Ukraine
• The US state department has launched a program to capture and analyze evidence of war crimes and other atrocities carried out by Russian forces in Ukraine

Their applications will first be examined in a sitting of the North Atlantic Council (NAC) of the 30 member countries, likely at ambassadorial level.

Seeking to move the membership process along, Sweden’s defense minister has already gone to Washington and will be followed by Swedish Prime Minister Magdalena Andersson and Finnish President Sauli Niinisto later this week.

Both nations have brushed off warnings from Russia that joining NATO would trigger “serious military and political consequences”.

On Monday, Russian President Vladimir Putin said he had no issue with Finland and Sweden, but warned Moscow would react to the expansion of military infrastructure on their territories.

Fears for the safety of soldiers from Azovstal steel plant

This week he claimed a rare victory in Mariupol in a military campaign in Ukraine which many analysts say has stalled.

Ukraine said 264 soldiers, including 53 wounded, had left their last stronghold in the besieged port city.

While both sides spoke of a deal under which all Ukrainian troops would abandon the Azovstal steelworks, it was unclear how many fighters still remained inside, and whether any form of prisoner swap had been agreed.

Russia claimed 265 Ukrainian soldiers “laid down their arms and surrendered”, including 51 seriously wounded, on Monday. On Wednesday it’s defense ministry said another 694 fighters had surrendered in the last 24 hours.

Volodymyr Zelenskyy, the Ukrainian president, said: “The evacuation mission is continuing. It is being supervised by our military and intelligence officers. The most influential international mediators are involved.”

The Kremlin said Putin had personally guaranteed the prisoners would be treated according to international standards.

Russian defense ministry footage showed fighters leaving the plant, some carried on stretchers, others being searched by Russian troops.

For weeks, the soldiers were the last remaining pocket of resistance against the Russian advance in Mariupol, a strategically-important city in southern Ukraine.

It means Russia now has control of the Azov Sea coast and an unbroken stretch of eastern and southern Ukraine.

The battle for Donbas

Russia’s offensive in the east continued on Wednesday with its forces shelling Ukrainian positions along the entire frontline.

“In the Kharkiv direction, the enemy is focused on maintaining its positions and preventing the further advance of our troops,” Ukraine’s military said in a statement.

Ukrainian forces have driven Russian forces out of the area around Kharkiv, and claimed troops have reached the Russian border, 25 miles (40km) north of Ukraine’s second-largest city.

Last week, footage released by Ukrainian forces appeared to show several burnt out military vehicles and segments of a bridge partially submerged in a river in the Donbas region.

The UK Ministry of Defense said the images suggested Russia had lost almost an entire battalion and the pontoon bridging equipment deployed while crossing the Siverskyi Donets river west of Severodonetsk in the Luhansk region.

Around a third of the Donbas was held by Russia-backed separatists before the invasion.

Moscow now controls around 90% of the Luhansk region, but it has failed to make major inroads towards the key cities of Sloviansk and Kramatorsk in Donetsk.