There have been numerous reports that the Ukrainian military is outfoxing the Russians on the battlefield in a modern adaptation of deception tactics that go back to ancient times. Videos posted on social media platforms seem to show Ukrainian forces using US-made High Mobility Artillery Rocket System, or HIMARS, against Russian forces — with a devastating effect.

Strikes with the long-range rocket artillery system have indeed destroyed large ammunition and fuel dumps deep behind Russian lines in southern Ukraine in recent weeks, wreaking havoc on Russian logistics. So targeting HIMARS is a high priority for Russia.

But now media reports indicate Ukrainian has a fleet of wooden HIMARS replicas set up to draw Russian fire, which reveals the location of Russian weapon placements and leads the Russian military to squander its finite supply of precision missiles. Although made of wood, the HIMARS reproductions bear a strong enough resemblance to their real counterparts, which may well help even the odds Ukraine faces against a larger, better-equipped Russian army.

Although the Ukrainian subterfuge replicates some of the most modern American equipment on the battlefield today, their imitation game is hardly new.

The Chinese military general, strategist, and philosopher Sun Tzu recommended this tactic in his military treatise The Art of War, written in the 5th century BCE. There, he called on military commanders to “set up decoys and feign confusion” and cause an enemy to miscalculate the opposing force. “All warfare is based on deception,” Sun Tzu wrote.

While at camp during Rome’s Gallic Wars in what is today France and Belgium in the 50s BCE, Julius Caesar stationed some of his legionaries in such a way that they appeared to be a much larger force than they actually were and thereby exaggerated Roman strength. Caesar’s accounts of his wars in Europe describe approaching and destroying Gaulish forces that had been distracted by his deceptively large forces at camp. 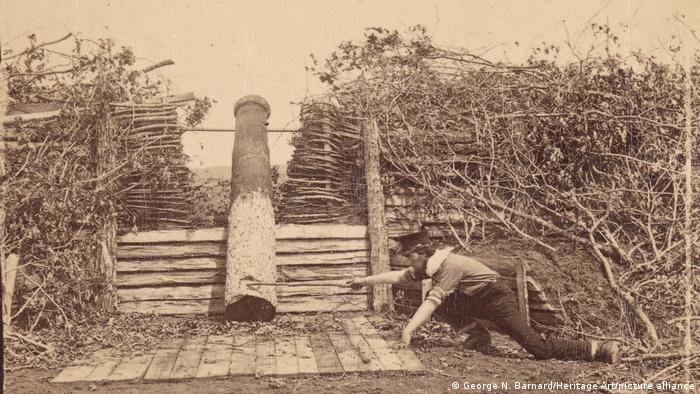 After the advent of the internal combustion engine and its more widespread application in war, battlefield decoys gained new importance. The tank made its combat debut during World War I (1914-1918). With it, the British Army attempted to break the stalemate of trench warfare. Quickly, both the British and Germans employed dummy tanks, made of wood and painted burlap cloth, to deceive the other side and lead the opponents to overestimate the adversaries’ strength.

Although motorized military machines made their widespread operational debut during World War I, Europe’s armies were not yet fully motorized but still relied partly on horses to move material across the battlefield. So the armies erected dummy horses made of wood, blanket-covered frames to deceive enemy reconnaissance pilots’ observations from the air.

During World War II (1939 – 1945), Nazi Germany and its allies, as well as the alliance of their opponents practiced deception on a much larger scale. Before the Western Allies crossed the channel and landed in Normandy, France, in 1944, troops in England had already made extensive use of inflatable tanks.

These dummies inflated German estimates of Allied strength, and in combination with false intelligence, this served to convince the Germans that the Allied invasion would take place elsewhere, which helped draw German forces away from the Normandy beaches.

So great was the importance placed on tactical trickery that the United States Army created the 23rd Headquarters Special Troops — also known as the Ghost Army — which was described as a “traveling road show of deception.” Armed with inflatable tanks, trucks, and airplanes, and audio recordings of troop and vehicle movements which blasted out via powerful speaker systems, the American Ghost Army staged large deception operations in Belgium, France, Germany, and Luxembourg and is credited with saving the lives of thousands of US soldiers through their reception. 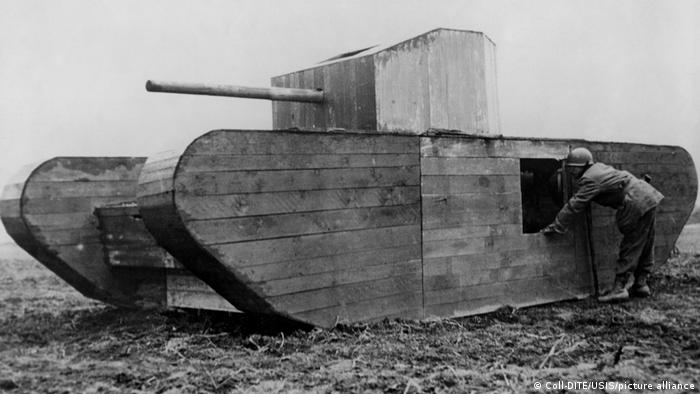 Wartime trickery extends to nonstate actors as well. In 2016, the Iraqi Army captured wooden replicas of Humvees and tanks built by the terrorist Islamic State militia, intended to draw fire from the US-led air campaign. Although they were made primarily of wood, the imitation vehicles appeared genuine from a distance — some even had bearded mannequins in the driver’s seats to complete the deception.

Lacking any airpower, the Islamic State hoped to distract coalition warplanes, negate the allied coalition’s advantage in the air, and preserve the Islamic States’ fleet of captured trucks, tanks, and personnel carriers.

While you’re here: DW editors round up what is happening in Germany and the world in regular e-mail newsletters. You can sign up here for the weekly “Berlin Briefing” and more.