“The builders are doing a great job,” said Tamara Herasymenko, a resident of a 16-story apartment building on the western outskirts of the Ukrainian capital, Kyiv. “They’re working seven days a week,” she enthused.

Herasymenko has come to the building on Chornobylska Street along with several other of the building’s residents to see how the reconstruction work is progressing here.

It was on the morning of March 15 that a Russian rocket hit the tower block, causing significant destruction. The Russian strike hit a gas line leading into the upper stories and this quickly caused a major fire. Out of 126 apartments here, 76 were completely burned out while the rest suffered water and smoke damage.

Herasymenko recounts how about a third of the building’s residents were home that day. Rescue services managed to get more than 40 people out of the building but four of her neighbors lost their lives. 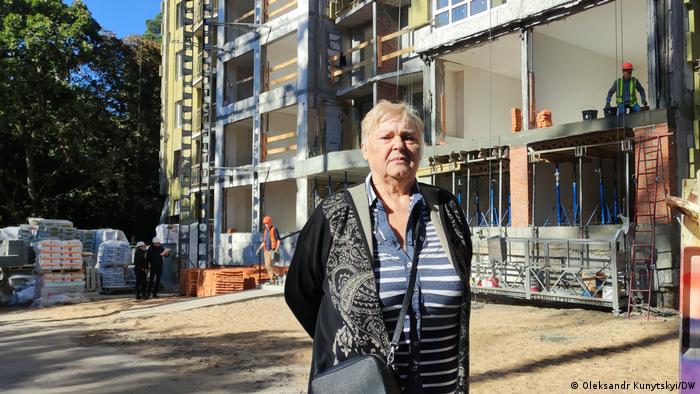 Tamara Herasymenko would like to return to her apartment before winter

Since that day, the building’s residents have been homeless. “Some have rented a temporary apartment and others are staying with relatives,” Herasymenko told DW. “Some left the country.”

“I rented an apartment here in Kyiv myself,” she continued. But, she said, like most of her neighbors, she wants to get back into her own home as quickly as possible.

Some 100 construction workers are busy at the site every day, according to Denys Titov, a project manager at Askon, the company that’s running the site.

“We think we’ll have this done by the time the heating season starts, mid-October or November,” he said — although he adds that the war is delaying the delivery of some construction materials.

Askon started work on this apartment building in mid-April after authorities checked that it could be rebuilt.

“Initially residents said they wouldn’t want to live here again. The damage just seemed too great,” Titov explained. “But this building is going to still be standing for years to come.”

“It was just lucky that it was this block, built to withstand earthquakes, that was struck,” he said. “In the whole of Kyiv there are only about 30 such buildings. If that hadn’t been the case, then the outcome would have been much worse and we would most likely have had to pull it down.”

Initially, everything was covered with dust and piles of rubble had to be carried away, Titov recalled. But now, the workers are insulating the outer walls and renovating the interiors of the apartments.

“This apartment block is going to be better than it was before,” Titov said. “The electrics are completely new, the lifts are new, the facade is insulated and there are energy-saving windows and new bathrooms.” 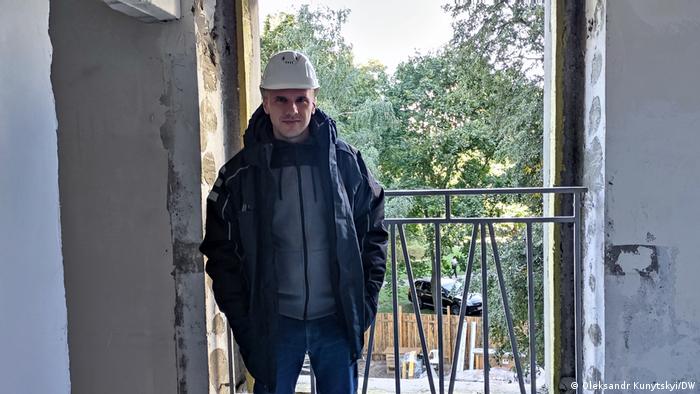 One thing the apartments won’t come with though is new furniture. But volunteers are helping with that, resident Herasymenko said, “Those who have absolutely nothing at all left will be given furniture and household goods.”

Closer to the city center, a 26-story apartment building on Lobanovskyi Prospect, a wide boulevard in Kyiv’s southwestern neighborhoods, was also damaged after it was struck by a Russian rocket on February 26.

The rocket tore a hole in the building between the 17th and 21st floors, leaving the upper floors hanging in midair.

With the apartment block in danger of collapsing, residents quickly gathered donations to pay for urgent structural support to keep the building standing.

“At that time, the state wasn’t able to take care of rebuilding private houses,” said Olena Chumakova, who represents the residents involved in the reconstruction. “So we collected donations to get supports erected between the floors. The rubble was also taken away.”

The residents managed to collect almost 2 million Ukrainian hryvnia (€53,500; $53,500). They have since spent around 1.3 million of that on the renovations. 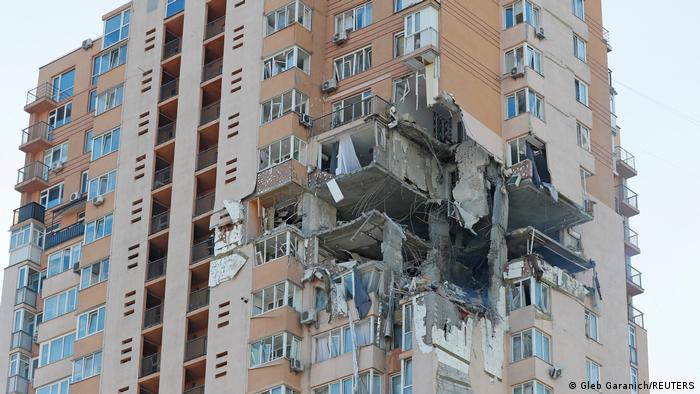 ‘Summer of noise and dust’

When local authorities carried out a structural inspection several months later, they determined that the upper floors would have to be demolished and rebuilt, which would take around three months.

Residents on the lower floors, living in undamaged apartments, were able to stay in their homes during the reconstruction.

“It was a summer with a lot of noise and dust. Even now they’re still hammering away,” Chumakova told DW. “But we’re just happy that the building is being brought back to life. We didn’t actually expect them to start working on this so quickly.”

Experts have said that the whole job is likely to end up costing around 57 million hryvnia, Chumakova said, but the city of Kyiv has already committed to paying that.

“Unfortunately the building won’t be finished before the heaters go on for winter,” said Oleksandr Akimov, who heads Zhytloinvestbud-UKB, a real estate and construction company run by the Kyiv city council that is overseeing the reconstruction of all the damaged buildings in the Ukrainian capital.

And workers can’t go any faster on the high rise on Lobanovskyi Prospect because the concrete needs to harden first. They also can’t insulate the outer walls properly if there is a frost.

“I think the work there will be finished in March or April next year,” Akimov said. 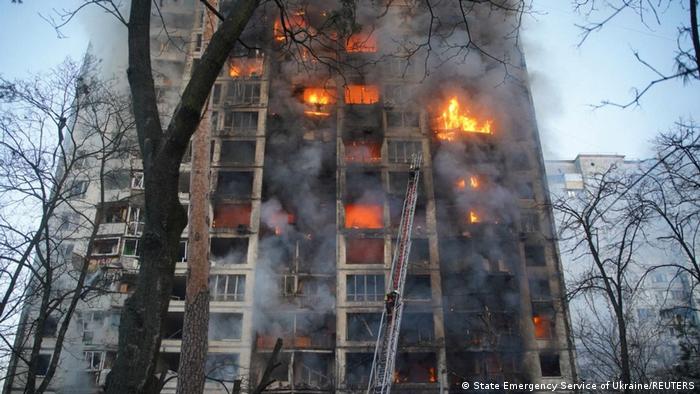 Since the start of the Russian invasion of Ukraine in late February, 640 buildings have been damaged in Kyiv, among them 238 apartment houses. Of these, 16 suffered serious damage. Akimov says that the city has allocated around 600 million hryvnias in its budget for reconstruction work.

That sum could rise though, he warned, if inspections on other buildings show work is needed there, too.

The Ukrainian government is adding to this fund with a further 200 million hryvnia. “This money is for houses in Kyiv where windows were shattered due to shock waves from explosions,” Akimov explained.

More and more residents are now returning to Kyiv and registering planned repairs with the authorities, the project manager said.

This article was originally written in Ukrainian.