By Alexander Gillespie of

There could be no better example of the United Nations’ failure to live up to its founding ideals than the recent visit by Secretary General António Guterres to Russia. Attempting to calm the dangerous war in Ukraine, he obtained nothing of significance. 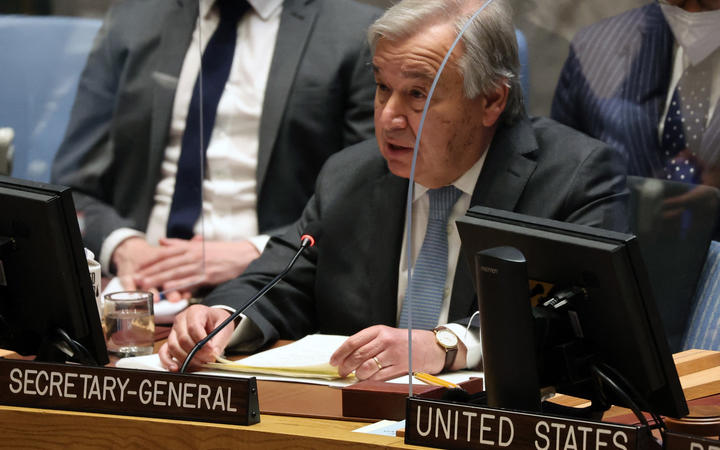 António Guterres, the Secretary-General of the United Nations (UN) addresses the Security Council during a meeting about the ongoing situation in Ukraine at the UN on 5 May 2022 in New York City.
Photo: 2022 Getty Images

No peace deal, no blue helmeted peacekeepers in the warzone keeping the belligerents apart. Relegated to the role of an aide to the Red Cross, his single achievement was an agreement in principle to help the beleaguered civilians in Mariupol.

Guterres then went to Kyiv where he criticized the Security Council for failing to prevent the war. Russia applauded with a salvo of missiles fired at the same city he was speaking in.

This is far from what the drafters of the UN Charter envisaged. They had wanted to avoid repeating history. The organization’s predecessor, the League of Nations, had failed precisely because the great powers felt their interests were better served by not joining.

To entice the five most powerful post-war nations (America, Russia, France, Britain and China) to join the new UN, it was split in two. The General Assembly was where the talking took place. The Security Council had the real power over peace and security.

Above all, the big five were offered the power of veto over Security Council actions, meaning any one of them could block any initiative to prevent or end war. Therein lies today’s sad reality.

It was originally hoped the veto would be used rarely, and those granted it would behave as model international citizens. Since 1946, however, the veto has been used more than 200 times. Russia (and the Soviet Union before it) has used it most, followed by the US.

Since the end of the Cold War, new patterns have emerged: The US has continued to use the veto to protect Israel, but France and Britain have become silent. Russia, and increasingly China, use their veto most to thwart Security Council initiatives.

Turning Syria to rubble was only possible because Russia helped its ally militarily and then repeatedly vetoed (often with the support of China) Security Council intervention or condemnation.

We now face the same situation with Ukraine. Russian President Vladimir Putin has run his tanks over the fundamental principles of the UN Charter and disobeyed the International Court of Justice because of the unbridled power of veto.

The last proposed Security Council resolution Russia vetoed affirmed the territorial sovereignty of Ukraine and condemned Russia’s invasion as a violation of the United Nations Charter. 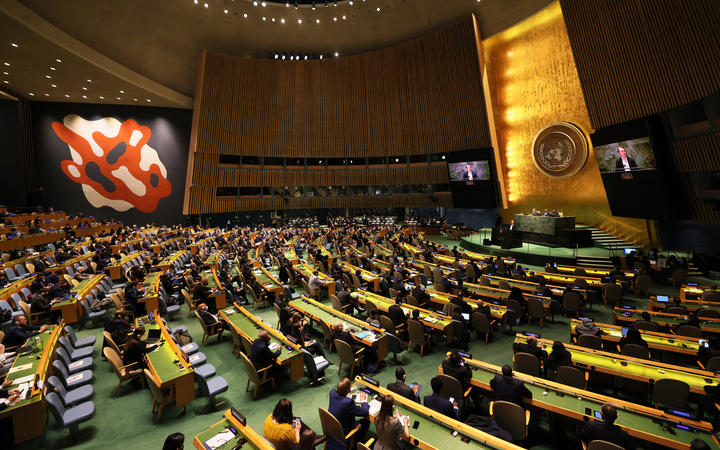 Members of the UN Security Council listen to Sergiy Kyslytsya, Permanent Representative of Ukraine to the United Nations, during a special session of the General Assembly in February.
Photo: 2022 Getty Images

Although most of the world wants restrictions on the use of the veto, nothing has changed. The only restraint involves the General Assembly being called together to scrutinize and comment after the veto has been used.

While the UN remains impotent, Ukraine exercises its sovereign right to self defense – including the right to source military hardware from other countries. This is quite legal under international law unless it involves prohibited weapons or the trade itself is prohibited by an agreed UN embargo, neither of which applies to Ukraine.

This has meant the UN void is filled (despite threats from Moscow) by at least 40 countries, which are now busy providing weaponry and aid to help Ukrainians defend themselves.

The net effect is that one permanent member of the Security Council has invaded a country across whose border sit three other permanent members furiously pushing high-tech weaponry into the warzone.

For now, the always risky balance between the veto-wielding members looks precarious. And the post-war assumption that the big powers would behave with some restraint now seems questionable at best.

While the scale and variety of arms shipments to Ukraine is growing, that alone won’t necessarily cause the war to spill across borders. Nor should Russia attacking those arms shipments once they reach Ukraine.

But if the geography of the conflict expands – such as if Russian targets outside Ukraine are repeatedly hit, or discontent spreads further into breakaway provinces – the danger escalates.

Similarly, should Russia harass Western nations with cyber-attacks in retaliation over arms supplies, and individual countries (or possibly NATO acting collectively) retaliated in kind, the situation could quickly spin out of control.

Other dire possibilities include Russia targeting arms shipments in international territory, such as the high seas – or worse, attacking them within (or transiting through) a NATO country.

The real trigger may not be Russia winning this war, but beginning to lose it. At that point, the theory and paper wall of a UN system designed to prevent wider conflict and superpowers clashing may disappear in a flash.