Ukraine has won some breathing space for its battered fiscal accounts after creditors approved the sovereign’s request to suspend debt payments for two years on Wednesday, although the risk of state-owned Naftogaz potentially failing with a similar proposal of its own means the prospect of a messy debt situation in the country still looms.

War-torn Ukraine had sought to defer payments on nearly US$20bn in face value of foreign-currency bonds for 24 months from August 1. Separately, it had also wanted to delay payments on its US$3.2bn GDP-linked warrants due on May 31 2023 to August 1 2024 and lower the amount of GDP-related repayments.

It had already secured crucial support from key official creditors, leading private bondholders, and the US Treasury for the offer before it was made public last month. Still, the outcome was far from certain.

“We did a lot of work with investors beforehand and micro-managed the process,” said Stefan Weiler, head of CEEMEA debt capital markets at JP Morgan, which acted as consent solicitation agent. “Therefore, we were confident it would be a success, although we were still nervous. We were targeting a huge amount of bonds and the significance of the project was obviously immense.”

“In the very early stages some investors were trying to test the waters to see if a better deal could be achieved,” said Weiler. “But as time passed, they realized they wouldn’t find enough like-minded accounts, and even they ended up voting in favor.”

Yuriy Butsa, government commissioner for Ukraine’s public debt management, said in a statement that the sovereign’s creditors were very supportive. “All the feedback was very constructive and I’m not aware of any holdouts from our key institutional investors,” he said. “Hopefully, sooner rather than later we will recover from the economic shock caused by the war started by Russia and we’ll come back to the market as always as a responsible and reliable issuer.”

But despite the sovereign’s successful outcome – and for similar debt standstill requests for two other state-owned companies, public road agency Ukravtodor and utility Ukrainergowhich both have government-guaranteed bonds – the outlook still looks tough for Ukraine.

A potential failure by Naftogaz to win approval to suspend coupon and maturity payments for two years across its three Eurobonds is one immediate concern. Naftogaz’s bonds aren’t government-guaranteed. But the company is a vital cog in Ukraine’s economy, especially given current circumstances, and having had one offer already rejected by its noteholders, a second failed attempt would be far from ideal for itself or the government.

A group of Naftogaz’s bondholders represented by law firm Dechert had already said after the latest offer was announced that, while it was “sympathetic to the difficulties that Ukraine currently faces”, it urged investors to vote against it. “The company remains a sustainable business operating on a sound financial footing and does not face the same types of challenges confronting Ukraine at the sovereign level,” said the bondholders.

The vote closed on Friday, with the outcome expected to be made public on August 17.

Even if Naftogaz’s offer passes – or any failure is resolved reasonably quickly without compromising the treatment of bondholders of the sovereign, Ukravtodor or Ukrenergo – all of these debt deferrals just buy Ukraine time rather than change the underlying dynamics. The sovereign’s debt standstill, for example, only saves Ukraine about US$6bn over the next two years, according to Evghenia Sleptsova, a senior EM economist at Oxford Economics. In the meantime its fiscal shortfall is running at about US$5bn a month.

Ukraine’s FX reserves are rapidly depleting and stand at just US$22.8bn. Disbursements that account for just under half of the US$28.2bn committed by Western governments and international financial institutions since the war began also fall well short of Ukraine’s immediate needs.

“Investors understand that the government will be back at the negotiation table in two years” [time] and will probably offer to reassess the country’s fiscal position and debt sustainability when the war is hopefully over,” said Vitaliy Vavryshchuk, head of macroeconomic research at Ukrainian broker ICU. “It’s almost certain the government will have to have a second restructuring in the future .”

Ukraine’s last one was in 2015, following Russia’s annexation of Crimea the year before. The GDP-linked warrants were created as part of that restructuring.

“Ukraine wants to maintain market access and be seen as creditor-friendly,” said Peter Kisler, a portfolio manager at Trium Capital. “I would not expect haircuts to exceed 50% unless Ukraine loses a lot more territory. If the war ends within a year, and Ukraine keeps its currently held territory, haircuts could be 25% or less – but I may be optimistic.” 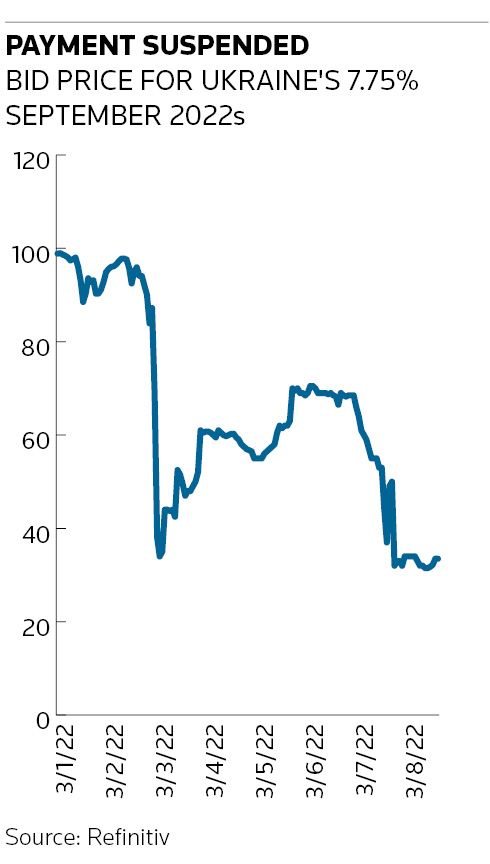