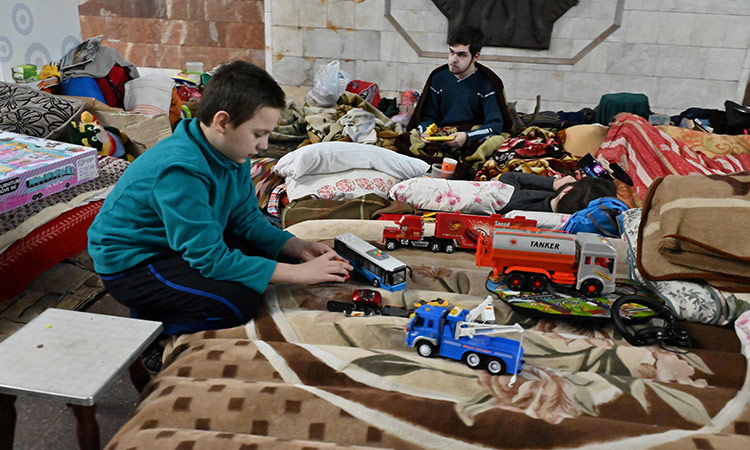 A child plays as he shelters with others in a subway station on the northern outskirts of the second largest Ukrainian city of Kharkiv amid the Russian invasion of Ukraine. Agence France-Presse

The politician who tried and failed to make peace with Hitler, former British Prime Minister Neville Chamberlain, said, “In war, whichever side may call itself the victor, there are no winners, but all are losers.” He was right. All the world is certain to lose from Russia’s unnecessary war on Ukraine.

The biggest loser is Ukraine itself. Towns and villages have been destroyed, thousands of civilians and soldiers have been killed or wounded, four million civilians have become refugees, six million are internally displaced, the country’s farmland and manufacturing plant have been devastated, and its economy has been wrecked. The damage and destruction inflicted on Ukrainian infrastructure is estimated at $ 60 billion at this point.

While there has been a surge in Ukrainian nationalism and solidarity, this could dissipate in the medium-to-long-term and create friction and tension within society. Right-wingers, who set an aggressive tone as Russia deployed along Ukraine’s borders, could be blamed and targeted for setting the country on the warpath by refusing to drop Kyiv’s insistence on joining NATO, the longstanding casus belli for Russian President Vladimir Putin.

At the outset of the Russian troop build-up, he rightly and bravely warned US President Joe Biden and British Prime Minister Boris Johnson not to hype the situation as Ukraine’s economy was suffering from war-talk. NATO Secretary General Jens Stoltenberg joined the war claque with the aim of injecting life into the dying alliance.

Biden and Johnson, who were facing serious domestic political challenges, did not heed Zelensky’s pleas and ignored his readiness to negotiate a deal with Putin which would mean formally renouncing Ukraine’s application to join NATO and forging deals to recognize Russia’s annexation of Crimea and the autonomy or independence of the Donbas region. If this conflict is going to end, Zelensky could have to revert to the political status quo ante after Ukraine has been devastated physically and economically. Ukraine’s economy could shrink by 35-45 percent this year.

Consequently, Zelensky would no longer be regarded as a hero but would be seen as a newcomer to politics who misread Putin and precipitated a war Ukraine could never win. He would lose support in Ukraine while, on the international scene, he would be castigated for propelling the world into a crisis caused by soaring food and fuel prices.

Putin is already a loser on the politico-military front. The Russian armed forces have not only failed to defeat Ukraine’s army but have also committed crimes against humanity and war crimes by attacking and abusing Ukrainian civilians. The Western-dominated International Criminal Court has already begun investigations into the behavior of Russia’s troops with the aim of prosecuting those responsible for violations of international law.

If Putin is charged, he would be the first head of state of a major power to face prosecution.

However, Western leaders may be reluctant to go this far. Although Putin would refuse to appear before the court or a special tribunal set up for the Ukraine war, charging him would set a precedent which could lead US and other Western leaders to face prosecution for war crimes. The first should be former US President George W. Bush for his 2003 unprovoked aggression against Iraq. His partner in crime, former British Prime Minister Tony Blair, should be next in the dock.

Whatever Putin’s fate, Russia cannot be isolated and sanctioned forever. Despite punitive sanctions, Russia has managed better than Ukraine since the war began. The Financial Times (FT) predicts the Russian economy could shrink by 10 percent this year. Inflation is currently falling and the domestic banking sector has stabilized. While Moscow cannot access $ 630 billion in foreign currency reserves in Western banks, Russia earned more than $ 1 billion plus a day in March from energy exports. This could eventually compensate for the seizure of the reserves.

The European Union depends on Russian oil and gas which cannot be replaced easily or quickly and the oil exporters cartel (OPEC + Russia) has vowed not to replace Russian exports if Europe breaks contracts with Russian firms. Furthermore, Moscow has already pivoted East where India and China are keen on increasing imports from Russia, particularly if they receive discounts.

Russian gas, oil, and coal are not the only exports on which the international community relies. Russian exports of nickel account for 49 percent of the world’s total, palladium, 42 percent, diamonds 33 percent, aluminum 26 percent, and platinum 13 percent.

Bans on Russian commercial flights have deprived Russians of holidays abroad and destination countries of millions of dollars in revenue while Russian ships have been barred from Western ports, disrupting the flow of global trade.

Meanwhile, the denial of Russian (and Ukrainian) grain to customers has pushed up the price of bread in his region and Africa and the absence of Russian fertilizer is harming farmers across the globe and boosting the price of vegetables, fruit and meat. The World Bank predicts a 37 percent rise in the cost of essential food, which is unbearable for the poor in most countries.

While the Russian economy is neither as large or as vibrant as it could be, its absence cannot be tolerated in the long term if the interdependent global system is to be maintained.

Having stoked the fires of war, Biden and Johnson are also losers. Despite his engagement in Ukraine’s war effort, Biden’s overall approval rating has sunk to 38 percent with 53 percent disapproving of his performance. Only 35 per cent approve his handling of the economy – which is beset with a rising cost of living due to inflation and higher oil prices – and a mere 40 per cent approve of his conduct in the Ukraine war, with 49 per cent disapproving.

Johnson has fared worse. His approval rating is 30 percent with 51 percent disapproving while the Ukraine crisis has ceased diverting public attention from partying during strict COVID lockdown at his offices and residence. Like Biden, his popularity depends on the cost of living crisis.

Finally, the European Union (EU) has lost its comfortable policy of coexisting with Russia and its members have had to come together to confront Moscow by providing Ukraine with weaponry and imposing destructive and disruptive sanctions. So far, the EU has maintained its unity and solidarity with Ukraine but when the war winds down and EU leaders jump off the bandwagon, personal political and national economic interests could take precedence, particularly if EU citizens find themselves taxed with the costs of providing for Ukrainian refugees and rebuilding that country.

The only winners of wars are profiteers and arms manufacturers.