An Israeli man recounted on Tuesday his escape from the besieged Ukrainian city of Mariupol, which has been under relentless Russian bombardment.

“The Russian army continues to bomb the city, but the Ukrainian army does not let it enter the city,” the man, identified only as Romaz, told Israel’s 103FM Radio, saying that the sound of explosions was constant, but that the situation has not changed much. ”

Romaz said that “the Russians are firing artillery, and [airstrikes] from planes as well as firing cannons from warships from the sea. ”

He said that “few people manage to escape the city, even on foot,” but some have succeeded in reaching the town of Manhush, some 20 kilometers away (approximately 12 miles).

“As soon as you leave the city, right on the border, the Russian army is already there. Right on the city line… and they let the refugees pass, ”Romaz told the radio station from the newfound safety of Lublin, Poland.

He said he had heard of people being taken against their will to Russia, but that he doesn’t know anyone personally, and believes it is occurring on the rising eastern flank. 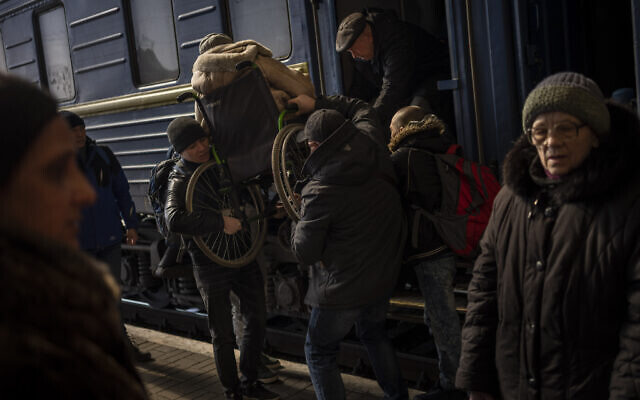 Ukrainians escaping from the besieged city of Mariupol along with other passengers from Zaporizhzhia arrive at Lviv, western Ukraine, on March 20, 2022. (AP Photo / Bernat Armangue)

“Yesterday we crossed the border into Poland – we came to a pretty big area, where there are a lot of refugees, thousands of them,” he said.

“We ate, got caught up on information, met friends from the Joint [Distribution Committee] and the Jewish Agency, ”he recalled, saying that he hopes to fly back to Israel in the coming days.

Russia’s attack on the embattled southern port of Mariupol continued unabated on Tuesday, with fleeing civilians describing relentless bombardments and corpses lying in the streets.

With communications crippled, movement restricted and many residents hiding, the fate of those inside an art school in the city flattened on Sunday and a theater that was blown apart four days earlier was unclear. More than 1,300 people were believed to be sheltering in the theater, and 400 were estimated to have been in art school.

Perched on the Sea of ​​Azov, Mariupol is a crucial port for Ukraine, lying along a stretch of territory between Russia and Crimea. As such, it is a key target that has been besieged for more than three weeks and has undergone some of the worst suffering of the war. 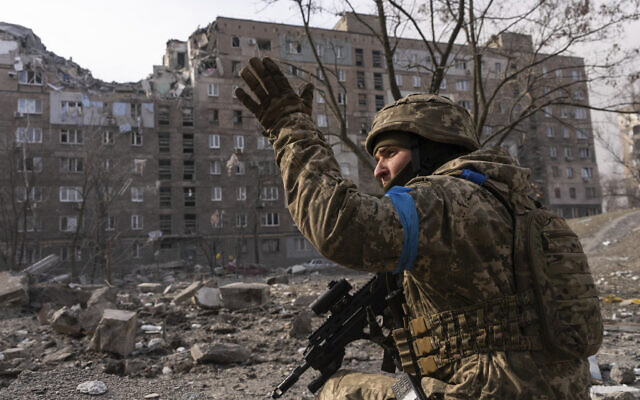 It is not clear how close its capture might be. Ukraine’s Defense Ministry said Tuesday that its forces were still defending the city and had destroyed a Russian patrol boat and electronic warfare complex.

Over the weekend, Moscow offered safe passage out of Mariupol – one corridor leading east to Russia, another going west to other parts of Ukraine – in return for the city’s surrender before daybreak Monday. Ukraine flatly rejected the offer well before the deadline.

Mariupol had a prewar population of about 430,000. Around a quarter were believed to have left in the opening days of the war, and tens of thousands escaped over the past week by way of the humanitarian corridors. Other attempts have been thwarted by the fighting.

Mariupol officials said on March 15 that at least 2,300 people had died in the siege, with some buried in mass graves. There has been no official estimate since then, but the number is feared to be higher after six more days of bombing.

In all, more than 8,000 Ukrainians escaped to safer areas Monday through humanitarian corridors, including about 3,000 from Mariupol, Deputy Prime Minister Iryna Vereshchuk said.

Israel is now a far more prominent player on the world stage than its size suggests. As The Times of Israel’s Diplomatic Correspondent, I’m well aware that Israel’s security, strategy and national interests are always scrutinized and have serious implications.

It takes balance, determination, and knowledge to accurately convey Israel’s story, and I come to work every day aiming to do so fully.

Financial support from readers like you allows me to travel to witness both war (I just returned from reporting in Ukraine) and the signing of historic agreements. And it enables The Times of Israel to remain the place readers across the globe turn to for accurate news about Israel’s relationship with the world.

If it’s important to you that independent, fact-based coverage of Israel’s role in the world exists and thrives, I urge you to support our work. Will you join The Times of Israel Community today?

We’re really pleased that you’ve read X Times of Israel articles in the past month.

That’s why we started the Times of Israel ten years ago – to provide discerning readers like you with must-read coverage of Israel and the Jewish world.

So now we have a request. Unlike other news outlets, we haven’t put up a paywall. But as the journalism we do is costly, we invite readers for whom The Times of Israel has become important to help support our work by joining The Times of Israel Community.

For as little as $ 6 a month you can help support our quality journalism while enjoying The Times of Israel AD-FREEas well as accessing exclusive content available only to Times of Israel Community members.

Thank you,
David Horovitz, Founding Editor of The Times of Israel