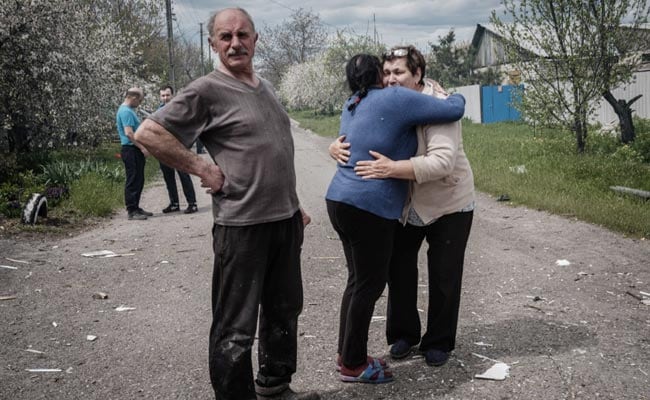 Pavel Borlatschenko wept as he saw his wife Marina leave on one of the last buses evacuating people from Lyman in eastern Ukraine, which is expected to fall imminently to Russian troops.

Swirls of black smoke rise above a depot near the railway station after a morning strike in the town in the eastern Donbas region, where the Russian campaign is now focused.

“My wife stayed with me until the last minute,” the 53-year-old farmer said.

“We hoped that Lyman would not be bombed, that all of this could be resolved peacefully,” he said.

Lyman, a former railway hub known as the “red town” for its redbrick industrial buildings, is expected to be one of the next places to fall to the Russian army.

“The enemy has improved its tactical position and is trying to broaden its offensive on the locality,” the Ukrainian chief of staff said on Thursday.

Ukrainian troops have withdrawn from Lyman.

“The situation is very difficult, the whole town has been encircled,” Andrii Pankov, the head of the Kramatorsk region where Lyman is located, told AFP.

He said nearly half the region had been occupied by Russian troops and tanks coming from the north.

The few of Lyman’s 20,000 residents still remaining have been ordered by Ukrainian authorities to leave before the town falls into Russian hands.

“We don’t know what the situation will be tomorrow,” said Oleksiy Migrin, the regional head of emergency services.

Oleksiy Krylovsky stands in front of his house, destroyed and burned by Russian shelling, going through his remaining belongings scattered on the pavement – CDs, clothes and papers.

“When we saw the Ukrainian troops leaving … we realized that things were going to heat up,” said the 34-year-old, who has decided to stay put in the area with friends.

“The Russians are getting closer and closer and they will be here soon,” he said.

For a variety of reasons – economic, practical or personal – more and more in this primarily Russian-speaking region are declaring themselves to be pro-Moscow.

At a little grocery store on the edges of Lyman, a small group of people huddle together and refuse to speak to journalists.

“The Ukrainian Nazis will kill us if we say what we think,” said a woman, using terminology used by Moscow to defend what it terms a military operation in its pro-Western neighbor.

A little further away, a Ukrainian woman who welcomes displaced people from other towns, serves bowls of borscht to policemen bringing vital supplies – fuel, food and equipment for a pregnant woman due to deliver a baby soon.

“Ukraine rests on people like them,” said Lyman police chief Igor Ugnevenko, hitting the road again in an armored vehicle amid sporadic firing.

After gulping down the borscht – a thick broth – the police leave, embracing their hosts and others, not knowing when they will meet one another again.