If you would like to receive Africa Brief in your inbox every Wednesday, please sign up here.

South African President Cyril Ramaphosa and U.S. President Joe Biden met last week at the White House to discuss trade, climate change, and energy transition. Washington is seeking to bring Africa back into the fold following pledges of neutrality from South Africa and many of its neighbors after Russia’s invasion of Ukraine as well as resistance to the U.S. position on the war.

Biden praised South Africa as a “vital voice” on the global stage. The continent’s importance was highlighted after the United Nations voted to condemn Russian aggression, in which half of the abstentions came from African countries. Having been long neglected in U.S. foreign policy, most African countries are now largely aligned with China in their political and economic partnerships. As a result, Africa has played a major role in furthering China’s and Russia’s goal of weakening the United States as the dominant great power.

South Africa’s position is important as the only African member of the G-20. Other African nations have followed its lead in refusing to bow to Western pressure on Russia. As expected, Ramaphosa raised objections to a draft U.S. bill that would sanction Africans doing business with Russian entities that are under U.S. sanctions. The bill, called the Countering Malign Russian Activities in Africa Act, would monitor African governments’ dealings with Russia and has been called “Cold War-esque” as well as described as “offensive” by South African Foreign Minister Naledi Pandor.

In Washington, Ramaphosa said Africans should not be punished for their historic nonaligned position. “We should not be told by anyone who we can associate with,” he said—a position that has been popular across Africa, Asia, and Latin America, as Shivshankar Menon noted in FP in July, even if the ideology may not have much to offer in this day and age, as C. Raja Mohan argued recently.

South Africa and other African countries haven’t forcefully condemned Russia’s invasion in part because of close historical ties with the former Soviet Union, which supported anti-apartheid and African independence struggles at a time when the West would not. “There are reasons for the perspectives that exist and one should never, I think, try to pretend that there aren’t histories,” Pandor said.

A U.S. charm offensive. Washington has significantly stepped up its charm offensive in Africa. Last month, U.S. ambassador to the United Nations Linda Thomas-Greenfield visited Uganda, Ghana, and Cape Verde. At the same time, U.S. Secretary of State Antony Blinken toured South Africa, the Democratic Republic of the Congo, and Rwanda. And in December, Washington will host an Africa Leaders Summit.

Nevertheless, African leaders view the renewed engagement with some degree of cynicism, knowing that both U.S. and Russian interest in the continent is more about great-power rivalry than equal friendship. Russian Foreign Minister Sergey Lavrov visited Uganda, the Republic of Congo, Ethiopia, and Egypt in July.

Russia seems to be securing its relationship with troubled African countries using security and arms sales as a bartering tool. Authoritarian leaders, such as Ugandan President Yoweri Museveni, are reaping the benefits of being wooed by both Russia and the United States. This is a challenge for Washington because the large majority of democratized African nations don’t want to pick a side and be once again drawn into a global cold war.

A newly dusted-off Africa policy, which still focuses excessively on Russia and China and refers to a large majority of the continent under the contentious classification of “sub-Saharan Africa,” is not helping matters. As Zainab Usman, director of the Africa Program at the Carnegie Endowment for International Peace, writes, Washington “could have led the way in casting aside a perplexing demarcation that many Africans themselves do not subscribe to. It is surprising that a strategy that emphasizes its newness continues with the perplexing use of ‘sub-Saharan.’”

Kerry’s cold reception. Meanwhile, in Senegal, U.S. climate envoy John Kerry managed to anger both African leaders and climate activists when he attended the African Ministerial Conference on the Environment in the capital, Dakar. He cautioned against investing in long-term gas projects and said all nations had to pull together to combat the climate crisis, telling an audience: “Well guess what, folks? Mother Nature does not measure where the emissions come from.”

Many Africans perceived his visit as yet another U.S. official coming to lecture them about being green. The Pan African Climate Justice Alliance called Kerry’s presence a “public relations gimmick” that played with “semantics.”

Words and framing matter. As Kholood Khair, a political analyst and managing partner at Insight Strategy Partners in Sudan, previously noted in Foreign Policy, the authoritative tone of messaging coming from U.S. officials is failing to win support. “African leaders have increasingly become more allergic to that tone—something that China has figured out,” she said.

China tops the list of the world’s worst polluters, followed by the United States. By contrast, Nigeria—with Africa’s biggest economy and population—emitted 0.6 metric tons of carbon per capita in 2019 compared with 14.7 metric tons in the United States that same year. Meanwhile, Mozambique, Ivory Coast, and Senegal are gearing up to exploit recent discoveries of gas backed by European governments keen to secure their own energy needs and reduce their dependency on Russia. Criticism of those projects has led to talks of Western hypocrisy.

Ultimately, a continued focus on fostering economic partnerships instead of undercutting key African development goals is a better long-term plan. For example, the Biden administration won praise from Ramaphosa as one of few Western governments that said it would not stand in the way of the African continent’s fight to waive intellectual property rights on COVID-19 vaccines at the World Trade Organization.

Ramaphosa said he would like to see the recently agreed Trade-Related Aspects of Intellectual Property Rights waiver extended to cover COVID-19 therapeutics and diagnostics. Although Washington initially hoarded vaccines, funding through the U.S. International Development Finance Corporation is supporting Senegal and South Africa to make their own vaccines, which could be used to fight malaria in the future. 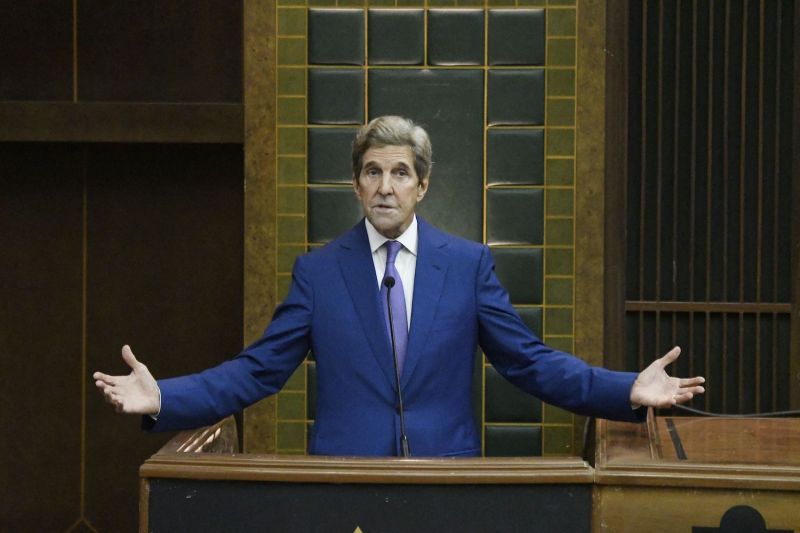 U.S. climate envoy John Kerry speaks during the African Ministerial Conference on the Environment in Dakar, Senegal, on Sept. 15.

U.S. climate envoy John Kerry speaks during the African Ministerial Conference on the Environment in Dakar, Senegal, on Sept. 15.SEYLLOU/AFP via Getty Images

U.S. green energy pledges. Nigerian officials signed onto the Clean Energy Demand Initiative during a meeting with Kerry last Tuesday and the country is aiming for renewable energy to account for 30 percent of its energy mix by 2030 and to achieve net-zero emissions by 2060. However, it needs an investment of $410 billion; most investors are coming from the Middle East and African financial institutions.

While in Dakar, Kerry mentioned that progress on a $8.5 billion climate financing initiative to help South Africa shift to cleaner energy was dependent on Ramaphosa. “We’re waiting for the South African government to put some things on the table. … It would be great to have it done” before the U.N. climate change conference (COP27) in Egypt in November, Kerry said.

Under an agreement made with the United States, United Kingdom, France, Germany, and the European Union last year in Glasgow at the COP26 summit, South Africa is expected to decommission its coal-fired power plants, but the $8.5 billion offered is anticipated to come through loans below market rate.

Nigerian economy tumbles. Nigeria has once again lost its position as Africa’s top oil producer to Angola, according to OPEC data. The Nigerian National Petroleum Corporation blamed thieves from all levels of society, including armed groups, for stealing 200,000 barrels of crude oil per day.

Poverty and infrastructure challenges in the country have been exacerbated by rising global inflation. Nigeria’s inflation reached 20.5 percent in August, a near two-decade high. The biggest drivers were the prices of food, oil, and gas. Farmers in the country’s food-producing regions blamed recent floods and the country’s worsening security for the high cost of Nigerian staples, such as yams.

Saied’s latest ruling. Tunisian President Kais Saied has rewritten the country’s electoral law, reducing the role of political parties under a new constitution approved in a July vote that was widely boycotted. Under the new law, voters will choose individual candidates in the Dec. 17 election rather than a party—a switch that will weaken the influence of parties. Tunisia’s main parties have rejected the law, saying they will boycott elections under Saied’s new legislation.

Meanwhile, the country is in desperate need of an International Monetary Fund deal amid a chronic food shortage and a struggle to pay public sector salaries. Food subsidies are expected to make up around 8 percent of the country’s GDP.

Senegal’s cabinet reshuffle. Senegalese President Macky Sall, whose party narrowly won legislative elections in July but lost its absolute majority, reinstated the post of prime minister on Saturday, three years after abolishing it, and reshuffled his cabinet, sacking around a dozen ministers as his administration tries to tackle rising food and fuel prices.

Sall appointed Amadou Ba as prime minister, a taxation specialist who served under Sall as finance minister from 2013 to 2019 and then as foreign minister until 2020. Oulimata Sarr replaces Amadou Hott as economy minister. Mamadou Ba, the former general director of the budget, becomes finance minister, taking over from Abdoulaye Daouda Diallo, who is now Sall’s chief of staff.

In 2016, an immense project began to digitize and transcribe the detailed daily journals kept by officials of the Dutch East India Company between 1651 and 1795. The company dominated the spice trade, setting up an outpost at the Cape of Good Hope and later colonizing that region. Its registers—which included wind direction and force—are regarded by experts as the longest-written daily weather record prior to the 19th century for the Southern Hemisphere.

Scientists say the records show that rainfall in South Africa has gradually declined. “What we see is that there were, on average, more rain days between 1773 and 1791 than any time since then. The records also reinforce what scientists know about increasing temperatures over recent centuries,” said Stefan Grab, a historical climate professor at the University of the Witwatersrand in Johannesburg.

Grab is a co-author of a recent research paper looking at the digitized records, which shows how the planet has warmed since the Industrial Revolution. The work is significant, as many of Africa’s oldest climate records are kept in archives in Europe.

Western nations have sought to highlight Russia’s invasion of Ukraine as one of the key reasons for soaring food prices, arguing that Ukraine is one of Africa’s largest suppliers of grain. Russia has blamed sanctions on its goods for inflating food prices.

Police abuse in Nigeria. Cryptocurrency prices are down, but Nigerian investors continue to embrace the medium as a more reliable platform against the tumbling naira, journalist Kingsley Charles writes in Unbias the News. However, young investors still face abuse and extortion by police despite the Nigerian government having ostensibly disbanded the abusive police unit, the Special Anti-Robbery Squad, following the #EndSARS protests in 2020.

Angola’s electoral future. Angolan President João Lourenço was sworn into office on Thursday for a second term after the ruling People’s Movement for the Liberation of Angola won the Aug. 24 election. In African Arguments, Cláudio Silva writes that the main opposition party’s small victory in winning the capital, Luanda, demonstrates how engaged young Angolans are in shaping the country’s political future. “They now have more power than ever before, though they may have to wait until 2027 to exercise it at the ballot box,” he writes.