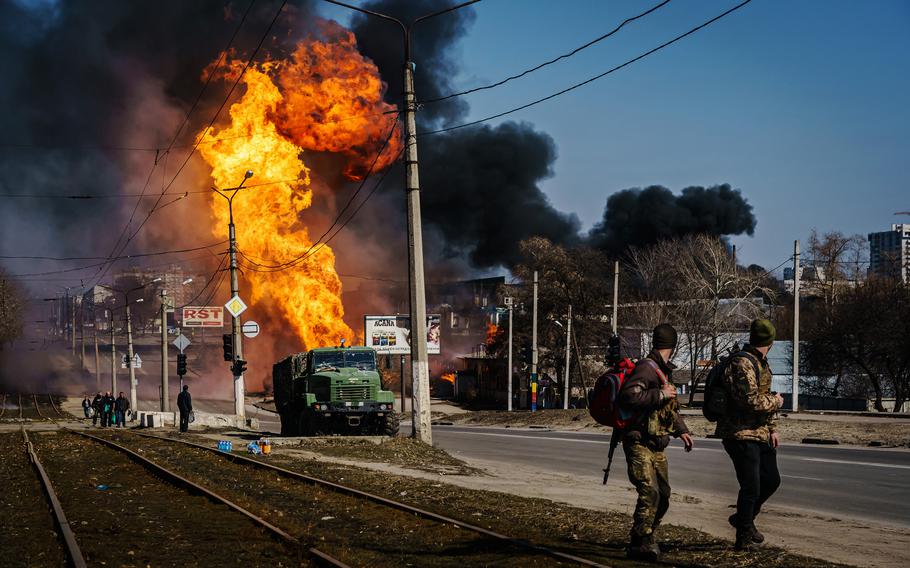 Ukrainian soldiers hitch and mov an artillery unit after Russian bombardment destroyed a building near their position, in the Moskovskyi district in Kharkiv, Ukraine, on March 25, 2022. (Marcus Yam / Los Angeles Times / TNS)

At least a dozen people were killed and scores of homes destroyed in the area of ​​Severodonetsk, regional Gov. Serhiy Haidai said on social media, an assertion that could not be independently verified. Severodonetsk is the easternmost point of the Donbas still in Ukrainian hands after 12 weeks of the current war and a longer fight in the region, dating back to 2014, between pro-Kyiv forces and Moscow-backed secessionists.

The nearby city of Lysychansk also came under sustained fire, the Ukrainian military’s General Staff said, adding that its troops had repelled a series of attacks in the Donbas over the last 24 hours, destroying 14 armored vehicles and shooting down a Russian drone.

Despite those battlefield successes, the growing war of attrition has exacted a grievous toll on civilians and infrastructure, with people killed or maimed, houses pulverized and power cut off in hard-hit communities.

“It’s hell there, and that’s not an exaggeration,” Zelenskyy said in his nightly video address to the nation.

He condemned a missile strike on the northeastern village of Desna, in which many residents were reported killed, as another example of attempted “genocide” by Russia. “It is a conscious and criminal attempt to kill as many Ukrainians as possible, to destroy more homes, public sites, businesses,” Zelenskyy said.

To bolster Ukraine’s defense, the US Senate approved $ 40 billion in new aid for Kyiv on Thursday, sending the package to President Joe Biden for his promised signature. The Group of 7 industrialized nations is also on track to allocate $ 18 billion for Kyiv, the German finance minister told Bloomberg Television on Friday.

Western materiel and humanitarian assistance have been crucial to Ukraine’s ability to defy an enemy whose military might, both in personnel and weaponry, dwarfs its own.

“This is a demonstration of strong leadership and a necessary contribution to our common defense of freedom,” Zelenskyy said of the new US pledge.

Whether the increased aid can turn the tide of the war, which Ukrainian officials acknowledge has entered a “protracted phase,” remains to be seen. With the conquest of Mariupol, the southeastern port city that Russian forces have essentially blown to bits, Moscow now controls access to the Sea of ​​Azov and to land extending to the Crimean peninsula, which the Kremlin illegally annexed eight years ago.

That has had disastrous effects on Ukraine’s economy, particularly its ability to ship out the grain that many Ukrainians rely on for their livelihood and millions around the world depend on for food. The loss in trade and the costs of prosecuting the war have contributed to an enormous budget deficit of $ 5 billion a month for Kyiv, officials say. And reduced exports and rising prices for wheat have worsened food insecurity in countries uninvolved in the conflict, such as Egypt and Pakistan.

At a United Nations Security Council meeting Thursday to address the crisis, US Secretary of State Antony J. Blinken said the food supply for millions of people worldwide was being “held hostage by the Russian military.” Moscow called the accusation a lie. UN Secretary-General Antonio Guterres said he was trying to negotiate a plan to move Ukrainian food exports out through the Black Sea.

Valeriy Zaluzhny, the commander in chief of Ukraine’s armed forces, told journalists that his troops have so far managed to keep the key Black Sea port of Mykolaiv, west of Crimea, under Ukrainian control.

They are also pushing southeast toward Kherson, the first city to fall after the war began Feb. 24, amid growing signs that Russia is planning to annex parts of the region, including the city of Melitopol, where Moscow is reportedly introducing the use of the Russian ruble in place of the Ukrainian hryvnia.

Fears remain high for the Ukrainian soldiers captured in Mariupol, who Moscow says number nearly 2,000. Kyiv has declined to give a precise figure. Transferred to a penal camp in Russian-controlled territory, many are severely injured and face a backlash from Russian soldiers and politicians, who have branded the Azov regiment as “Nazis” deserving trial and punishment.

The International Red Cross says it has registered as prisoners of war hundreds of troops evacuated from the massive Azovstal steelworks in Mariupol, where the city’s defenders made a long and bloody final stand.

Earlier this week, the government in Kyiv said it was giving up the fight for the devastated city, but a band of diehard soldiers remains holed up in the plant. In a video statement Friday, the Azov regiment’s commander, Maj. Denis Prokopenko, said efforts were still underway to remove the bodies of those who died trying to defend the facility.

Completing its takeover of Mariupol allows Russia to continue moving troops to the Donbas, now the focus of its offensive after its failure to capture Kyiv or the northeastern city of Kharkiv. But having been tied up so long in Mariupol and suffered losses, the forces there “must be re-equipped and refurbished before they can be redeployed effectively,” which can be a lengthy process, Britain’s Ministry of Defense said in its daily assessment of the war.

The Russian military brass is feeling the heat from President Vladimir Putin for falling well short of his goals for the so-called special military operation in Ukraine. To try to notch more successes quickly, “Russia will probably redistribute their forces swiftly without adequate preparation, which risks further force attrition,” the British assessment said.

London said earlier that a number of senior commanders had already been relieved of their posts, including Lt. Gen. Serhiy Kisel, whose fighters were unable to subdue Kharkiv. Vice Adm. Igor Osipov, the head of Russia’s Black Sea fleet, has also likely been suspended following the sinking of the flagship cruiser Moskva last month, a stunning victory for Ukraine that was aided by US-provided intelligence.

“A culture of cover-ups and scapegoating is probably prevalent within the Russian military and security system,” the British Ministry of Defense said. “Many officials involved in the invasion of Ukraine will likely be increasingly distracted by efforts to avoid personal guilt for Russia’s operational setbacks.”

McDonnell reported from Kyiv and Chu from London.