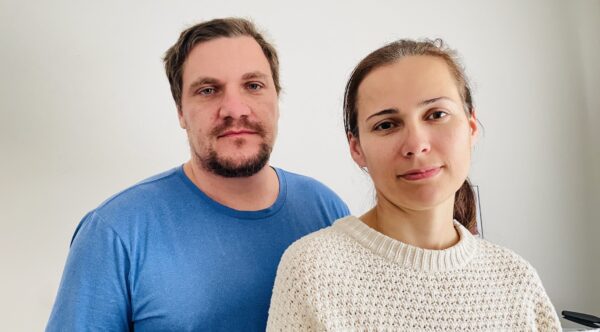 Oleksii Dubrovnyi and Olha Dubrovna stay in close touch with their families in Kyiv.

The horrors of the situation in Ukraine become personal when you know people who are experiencing the suffering firsthand.

In 2019, I became friends with a Ukrainian family currently living in Redondo Beach after receiving an assignment to conduct a conversational English class with Oleksii Dubrovnyi and his wife Olha Dubrovna.

The pair had moved to Southern California from their home in Kyiv when Oleksii took a job as a software architect at Adobe in Culver City. With them came their two children, Ihor, now 9, and Anna, who turns 8 this month. Both attend public schools in Redondo Beach. Also in residence at their apartment is an affectionate tabby cat called Peach.

Olha, who already has a university degree, has been adding to her skills by taking online classes at Santa Monica College to get an associate of arts degree in web development.

Before the war in Ukraine began, the Dubrovnyis had visited many of the natural wonders of the West and Southwest, posting pictures of their excursions to entertain their families and friends back home. They had hoped to visit Ukraine this year, but, with the war in full swing, that has become an impossibility.

Although there was already an ongoing war in Ukraine that began in 2014 when Russia annexed the Crimean Peninsula, the brutality of the latest full-scale invasion that ignited on Feb. 24 has shattered the family’s belief that normal life might continue in their beloved homeland.

The current war has resulted in untold civilian and military casualties and displaced almost a quarter of the country’s population, including 4.3 million children, according to UNICEF. More than 3.5 million Ukrainians have fled the country, mostly to Poland, but also to other parts of Europe. President Biden has promised that the US will accept 100,000 refugees from the country.

For the Dubrovnyis, the news and pictures they are watching and hearing, mostly via the internet, are overwhelming and terrifying. The reported war crimes she has heard that Russian soldiers are committing in Ukraine “make my hair stand on end,” Olha said.

Oleksii compares the Russian invaders to the Nazis, saying the Russian people are being misled about the horrors that are being inflicted on the civilian population in Ukraine.

“It’s the same kind of brainwashing machine as the Nazis used,” he said.

Focusing on work and school has become very difficult for the couple.

“It’s really depressing,” Olha said. “You can’t have anything like a regular routine because you just check out the news all the time and worry. It’s very hard to concentrate on work. ”

Olha and Oleksii are in constant contact with their families and friends. So far they’re safe, but the couple worries about the future as Russia closes in on the capital, Kyiv.

“A lot of my friends have body armor, helmets and guns,” Oleksii said. “But the Russians are fighting with a big war machine. They can just bomb them, use missiles and fighter jets. It’s like fighting against guns with bare hands. ”

The pair have close to 30 family members in Kyiv, including Olha’s mother, Oleksii’s parents, his 85-year-old grandmother, numerous cousins, and many friends. For the moment, most are staying put, fearing that the roads out of the capital might be more dangerous than remaining where they are.

Since men between 18 and 60 are barred from joining this exodus because Ukraine’s defense needs are so great, most of those leaving are women and children. The need for shelter, food, clothing, medicines, and other necessities is immense. To help with expenses, Oleksii and some of his colleagues at Adobe, have formed an organization, Adobe for Ukraine. Based in Poland, it is helping families relocate to Poland and elsewhere in Europe. Any extra funds they raise will be donated to other charities to help Ukraine. Here’s the link for more information and to make a donation: https://pomagam.pl/en/adobe-ukraine-2022.

“We can’t help everyone, but we will help as many as we can,” Olha said.

Another resource the Dubrovnyis suggest for those who want to help: Grammarly, an organization founded in Ukraine that helps people around the world improve their writing and communication skills shares links to six organizations that are providing aid to Ukraine. Click here for more information: https://www.grammarly.com/stand-with-ukraine.

Olha worries that Americans might lose interest in Ukraine as the weeks pass and the shattering news becomes more difficult to bear.

“We hope people won’t forget about us.”