Boris Johnson was honored with a Hollywood walk-of-fame style flagstone and received a medal for his wartime support of Ukraine on his final visit to Kyiv as Prime Minister today.

Mr Johnson, who has been one of the most vocal supporters of Ukraine’s plight in the face of Russian aggression, was awarded with the Ukrainian ‘Order of Liberty’ – the highest award that can be bestowed upon foreign nationals – in a ceremony personally led by Ukrainian President Volodymyr Zelensky.

After the intimate ceremony which saw Mr Johnson receive his medal and share a warm handshake with his Ukrainian counterpart, the pair toured the streets of Kyiv where the Prime Minister was shown a commemorative plaque bearing his name which was inset into the Ukrainian capital’s pavement.

The Prime Minister traveled to the Ukrainian capital on the country’s independence day, which marks 31 years since Ukraine broke free from Soviet rule.

Mr Johnson used the trip – his third to Kyiv since the start of Russia’s barbaric invasion in late February – to announce a new £54million package of British military support.

He also held a final round of face-to-face talks with Mr Zelensky, with whom he has grown close, as the country prepares to enter winter still in conflict with Russia.

Mr Johnson has less than two weeks left in office and the Government has been keen to stress – whoever succeeds him as PM out of either Liz Truss or Rishi Sunak – that British backing for Ukraine will continue.

The PM today reiterated that unwavering support, which has come through the supply of humanitarian aid, help in the investigation of war crimes by Russian forces, and efforts to rebuild Ukraine’s economy. 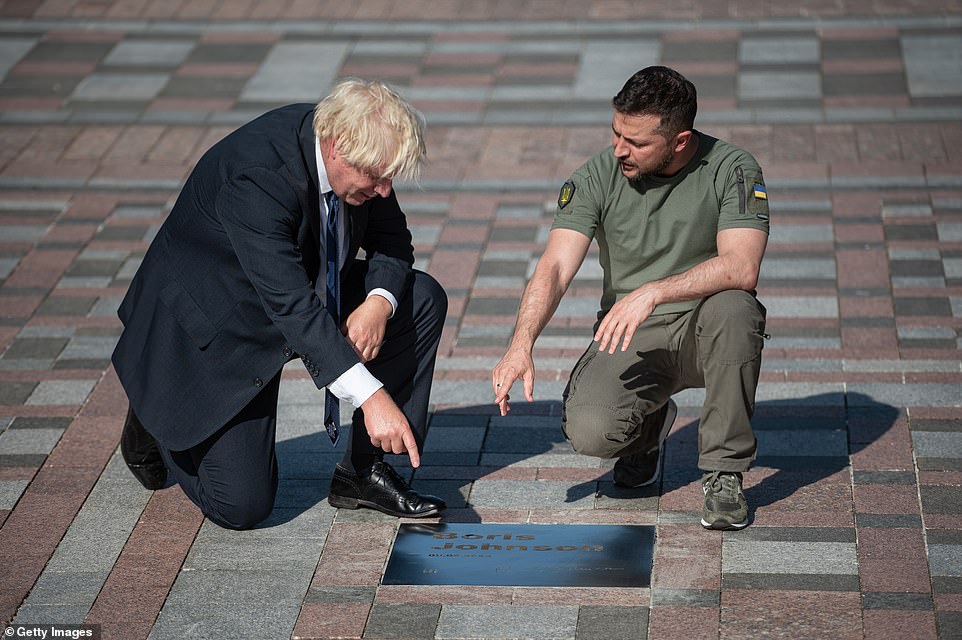 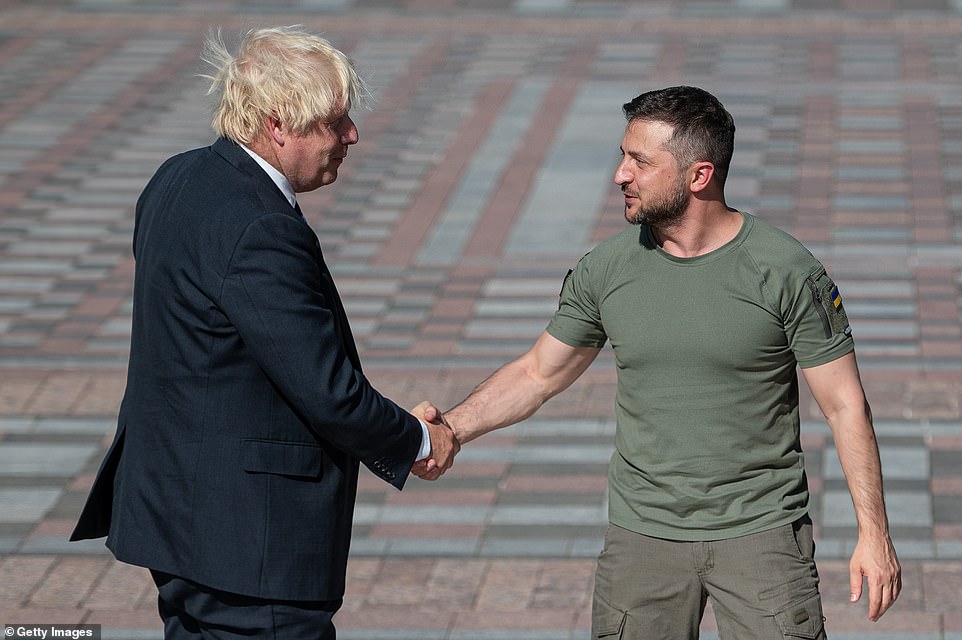 The British prime minister, who leaves office next month, visited the Ukrainian capital as the country commemorated its 1991 independence from the Soviet Union today, and shared a warm embrace with Zelensky 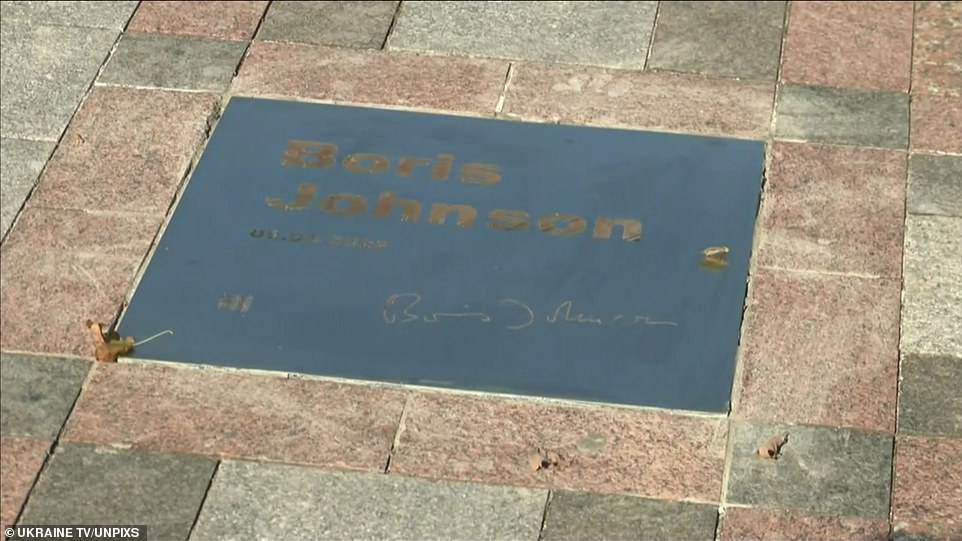 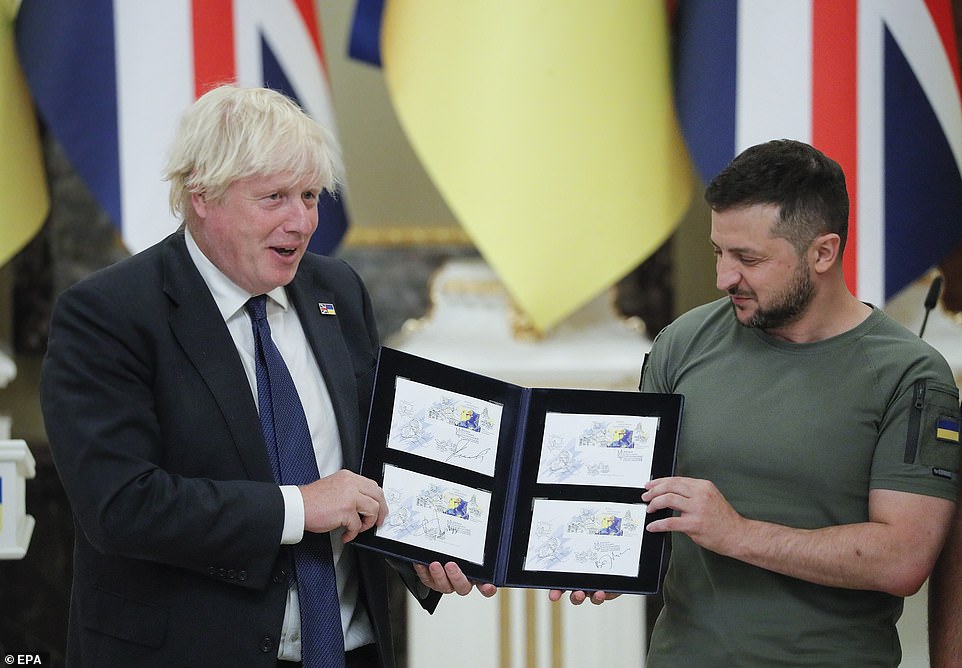 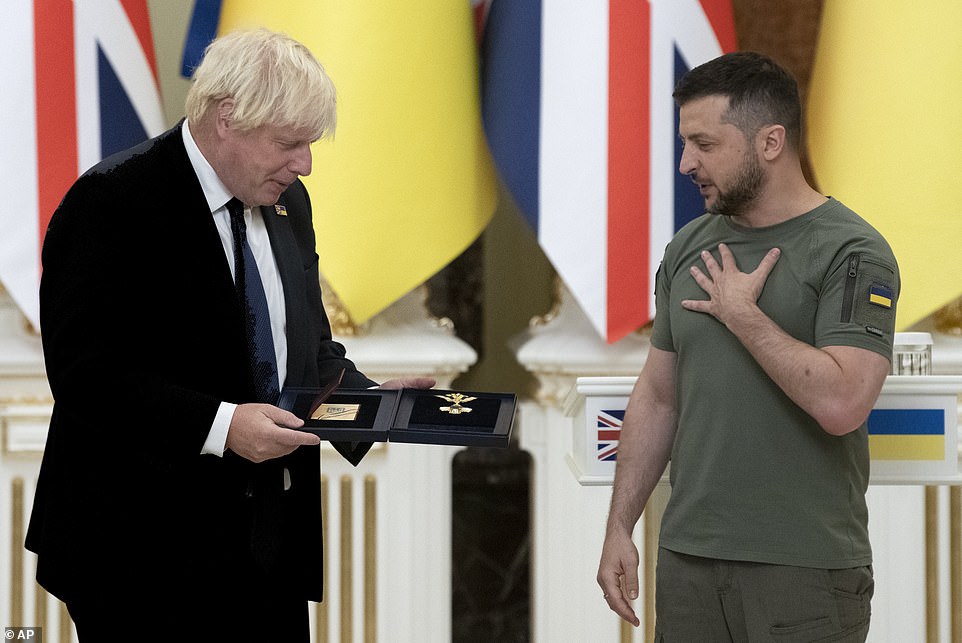 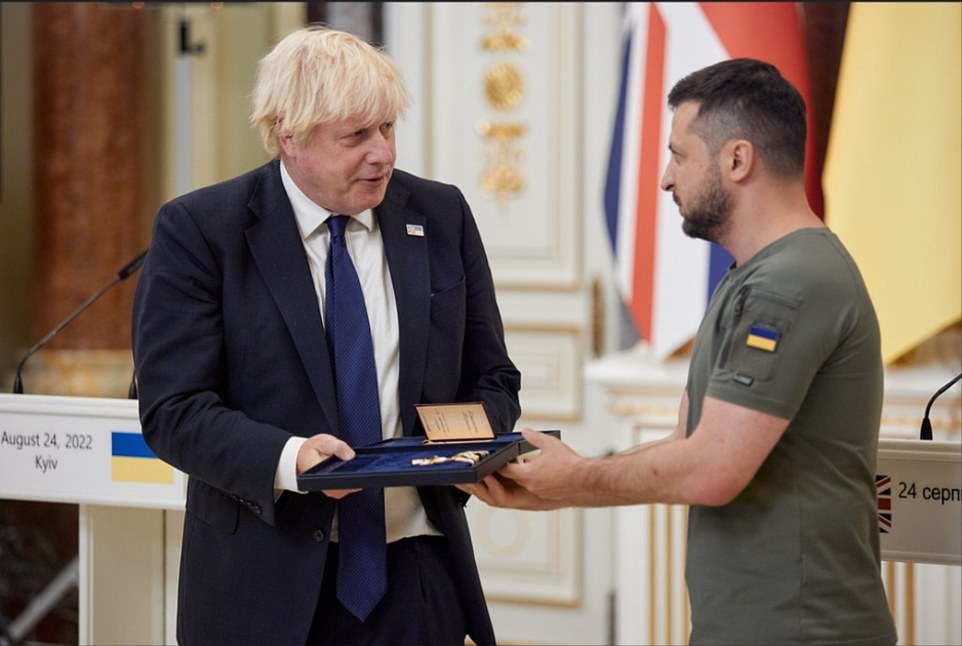 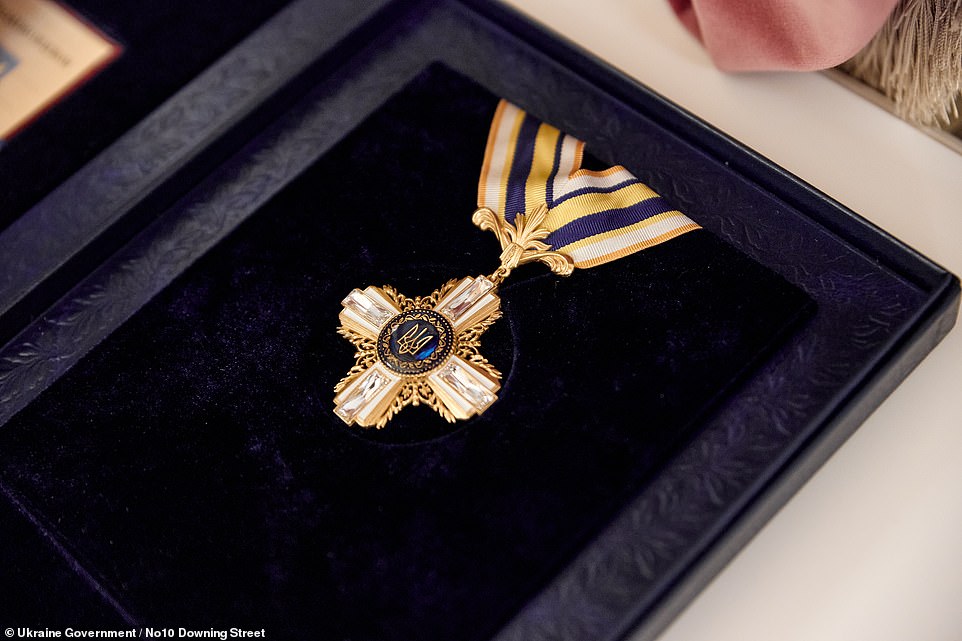 The PM said: ‘For the past six months, the UK has stood shoulder-to-shoulder with Ukraine, supporting this sovereign country to defend itself from this barbaric and illegal invader.

Today’s package of support will give the brave and resilient Ukrainian Armed Forces another boost in capability, allowing them to continue to push back Russian forces and fight for their freedom.

‘What happens in Ukraine matters to us all, which is why I am here today to deliver the message that the UK is with you and will be with you for the days and months ahead, and you can and will win.’

As part of the new package of British military support, Ukraine will be supplied with 2,000 state-of-the-art drones and anti-tank loitering munitions to help its forces better fight against Russian invaders. 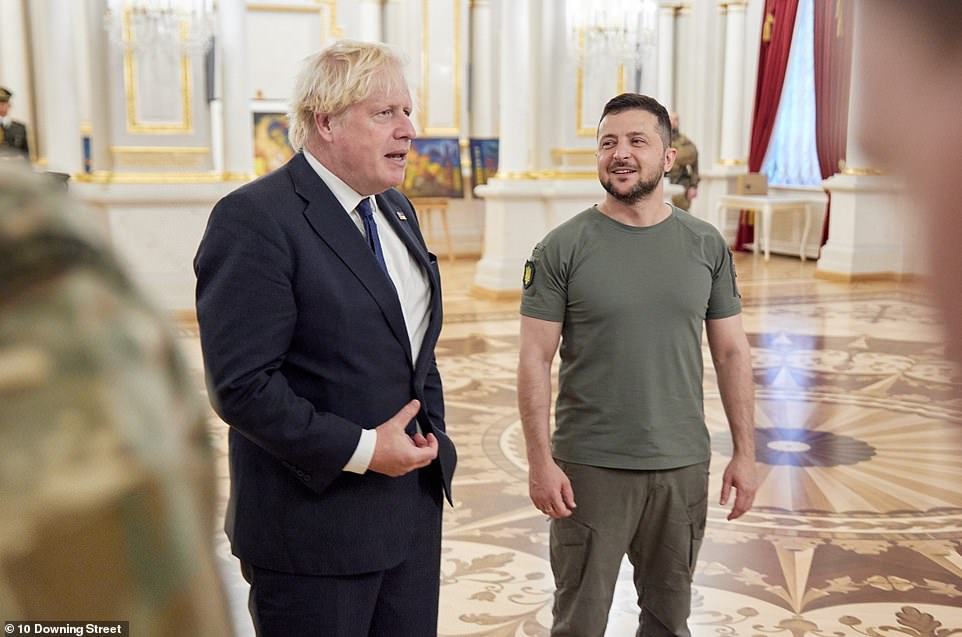 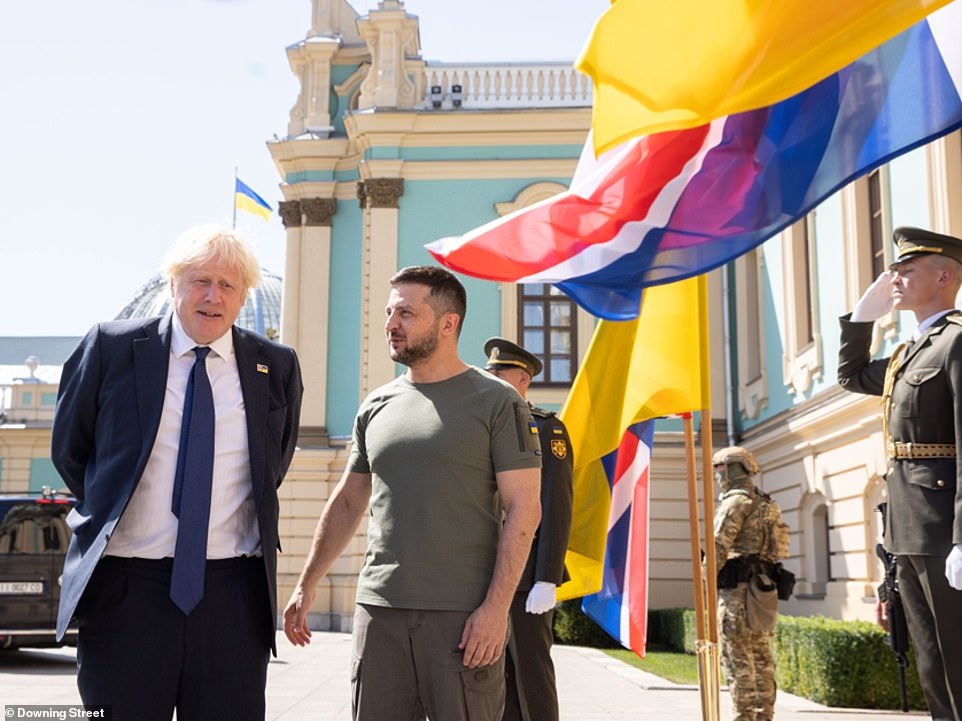 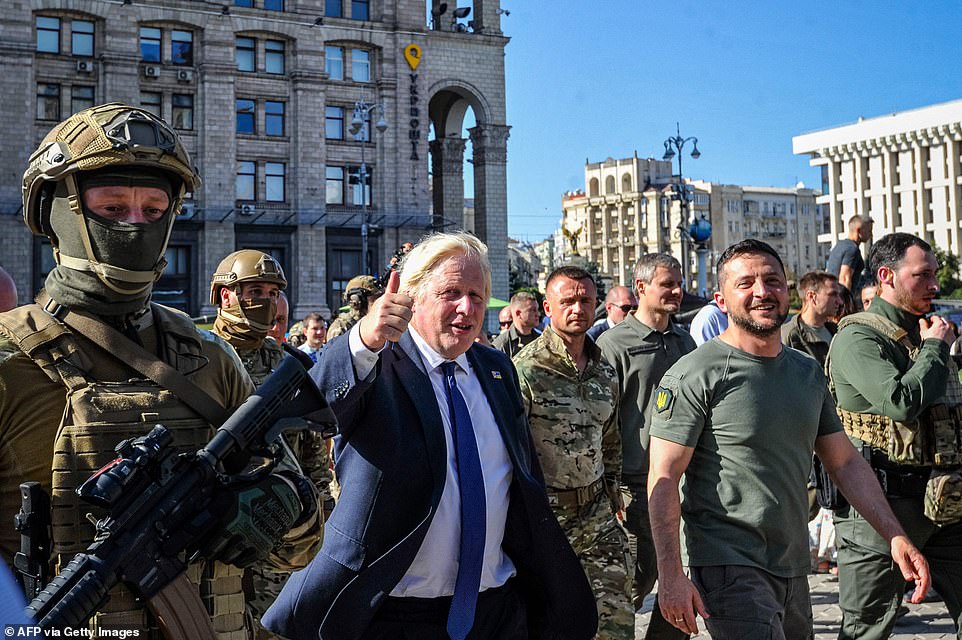 Mr Johnson used the trip to announce a new £54million package of British military support, including the supply of 2,000 state-of-the-art drones and anti-tank loitering munitions 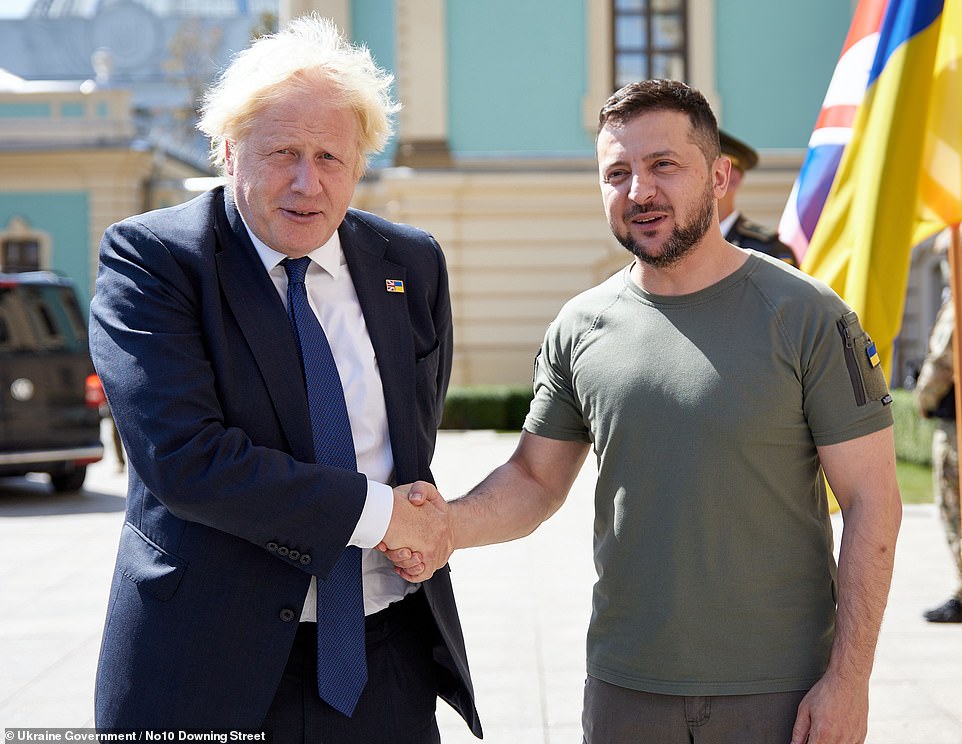 The package includes 850 hand-launched ‘Black Hornet’ micro-drones, which are specifically designed for use in towns and villages and are used to detect approaching enemy forces.

Each drone is smaller than a mobile phone and feeds back live video and still images to allow forces on the ground to defend urban areas safely.

Troops can be trained to fly the drones in less than 20 minutes.

Britain is also preparing to give mine-hunting vehicles to Ukraine to help detect Russian mines in the waters off its coastline.

Ukrainian troops will be trained in how to use them in British waters in the coming weeks. 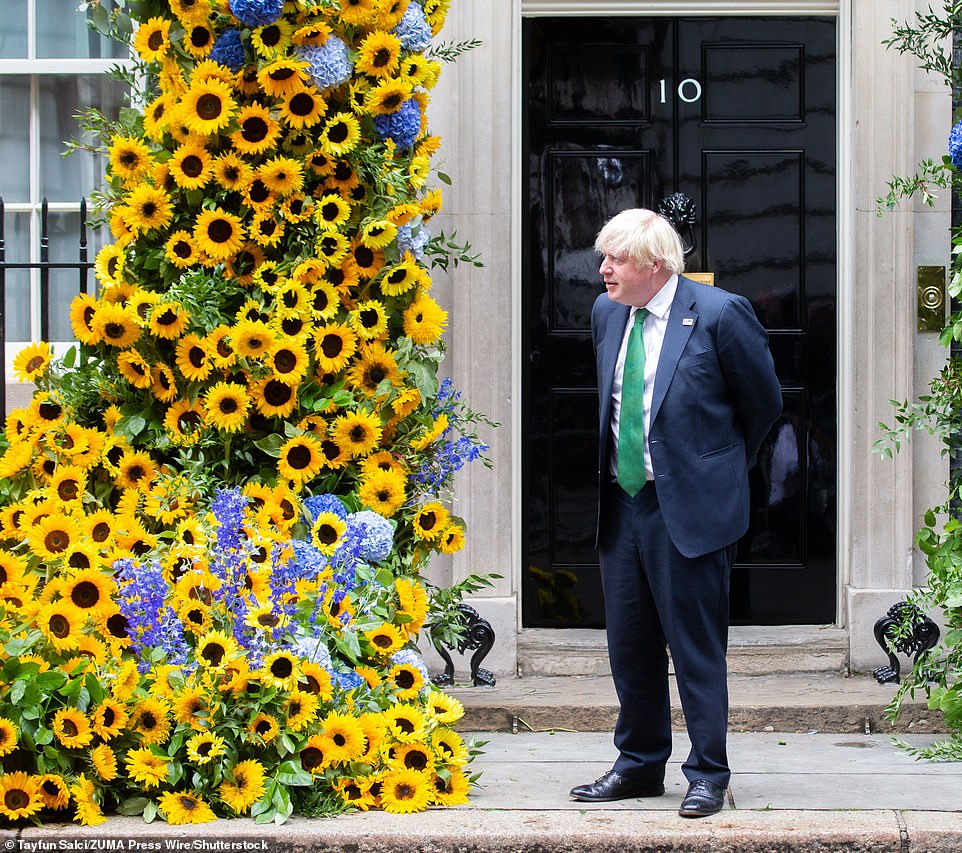 In a message to Britons as they face a cost-of-living crisis made worse by the war in Ukraine, the PM added: ‘If we’re paying in our energy bills for the evils of Vladimir Putin, the people of Ukraine are paying in their blood.’

He also hailed how, ‘like one of those indomitable Ukrainian boxers’ the country ‘came off the ropes’ and hit the Russian President ‘with an uppercut that sent Putin’s armies reeling from Kyiv and a hook to drive him from Kharkiv’.

‘Out of the ashes of your towns and cities, out of the monstrous scares that are being left by Putin’s missiles, something beautiful is blooming and it is a flower that the whole world can see and admire, and that is the incomparable will of the Ukrainians to resist,’ Mr Johnson continued.

Britain has so far committed more than £2.3billion of military and financial aid to Ukraine since Russia’s invasion began earlier this year.

It comes as British defense secretary Ben Wallace claimed Russia has lost 80,000 troops since the invasion began on February 24.

‘We pretty much accept, well, we do accept, the sort of observations of Russian losses to be – if you combine deaths, injuries, desertions – over 80,000 of their armed forces,’ he said.