Ukraine has reacted with disbelief to Russia’s promise in negotiations to scale down military operations around the capital, Kyiv, and another main city Chernihiv.

Ukrainian President Volodymyr Zelenskyy said there was no reason to believe Russia’s announcement that it would reduce military activity near Kyiv as well as in the northern city of Chernihiv, given what is happening on the ground.

“Yes, we can call those signals that we hear at the positive negotiations. But those signals don’t silence the explosions of Russian shells, ”Zelenskyy said.

“Of course, we see the risks. Of course, we don’t see any basis for trusting the words voiced by those or other representatives of the [Russian] state that is continuing to fight for our destruction. ”

Peace talks are expected to resume on Wednesday five weeks into what has devolved into a bloody war of attrition with thousands dead and nearly four million Ukrainians fleeing the country.

Ukraine’s delegation at the negotiations – held in Istanbul, Turkey – has laid out a framework under which the country would declare itself neutral and its security would be guaranteed by an array of other nations.

“Ukrainians are not naive people,” Zelenskyy continued. “Ukrainians have already learned during the 34 days of the invasion and during the past eight years of war in the Donbas that you can trust only concrete results.”

The governor of Ukraine’s Chernihiv region said on Wednesday he saw no let-up in Russian attacks. “We believe in it [the promise]? Of course not, ”Governor Viacheslav Chaus said on the Telegram messaging app.

“The ‘decreased activity’ in the Chernihiv region was demonstrated by the enemy carrying out strikes on [the city of] Nizhyn, including air strikes, and all night long they hit [the city of] Chernihiv. ” 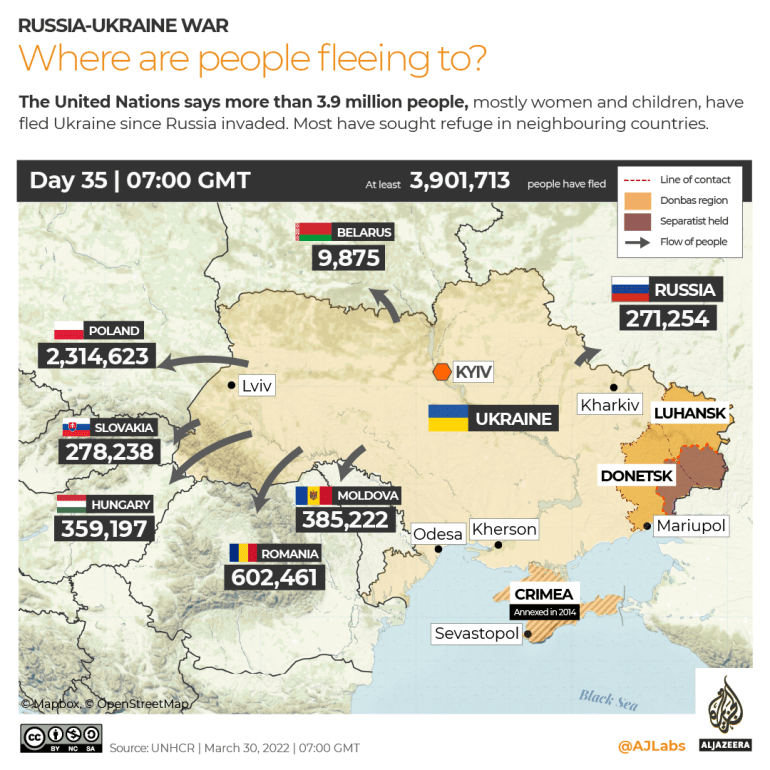 Russian Deputy Defense Minister Alexander Fomin told reporters on Tuesday: “In order to increase mutual trust and create the necessary conditions for further negotiations and achieving the ultimate goal of agreeing and signing [an] agreement, a decision was made to radically, by a large margin, reduce military activity in the Kyiv and Chernihiv directions. ”

Fomin did not spell out what that would mean in practical terms and made no mention of other areas that have seen heavy fighting, including around Mariupol in the southeast, Sumy and Kharkiv in the east, and Kherson and Mykolaiv in the south.

Al Jazeera’s Imran Khan, reporting from Kyiv, said there were no changes on the ground on Wednesday.

“Physically we haven’t seen any movements. In fact, we have been hearing shelling in the distance particularly towards the north of Kyiv, which has been hit particularly hard, ”said Khan.

While Moscow portrayed the reduction of military operations comment as a goodwill gesture, its ground troops have become bogged down and taken heavy losses in their attempts to seize Kyiv and other cities.

Last week and again on Tuesday, the Kremlin seemed to lower its war aims, saying its “main goal” is gaining control of the mostly Russian-speaking Donbas region in eastern Ukraine.

“The Russians are framing this as a concession to the Ukrainians,” said Khan. “The Ukrainians have said, ‘Well, we’ve actually stopped you from coming to Kyiv since the war began.’ They are saying, ‘It’s our victory and it’s not a concession. What you are giving us is what we fought for. ‘

Russia started moving small numbers of troops away from positions around Kyiv in a move that is more of a repositioning than a retreat or a withdrawal from the war, the U.S. military said on Tuesday.

“We should all be prepared to watch for a major offensive against other areas of Ukraine,” spokesman John Kirby told a news briefing. “It does not mean that the threat to Kyiv is over.”

The Ukrainian general staff said in a statement there are indications that Russian forces are regrouping to focus their efforts on eastern Ukraine.

“At the same time, the so-called ‘withdrawal of troops’ is most likely a rotation of individual units and is aimed at misleading the Ukrainian military leadership” by creating the misconception that the Russians have decided not to try to encircle Kyiv.

Britain’s Ministry of Defense in an intelligence update said: “It is highly likely that Russia will seek to divert combat power from the north to their offensive in the Donetsk and Luhansk regions in the east.”

Al Jazeera could not independently verify the claims made by either side.

The Moscow-backed self-proclaimed Donetsk People’s Republic in eastern Ukraine may consider joining Russia once it controls all of Ukraine’s Donetsk region, its leader was quoted as saying. Kyiv has said any such move would have no legal basis.

Russia calls its assault a “special military operation” to disarm and “de-Nazify” Ukraine. The West says it launched an unprovoked invasion.