Editorial Note: We earn a commission from partner links on Forbes Advisor. Commissions do not affect our editors’ opinions or evaluations.

As the war in Ukraine intensifies, Americans fear increasing financial effects, especially at the pump.

More than half of respondents (56%) in the latest Forbes Advisor-Ipsos Consumer Confidence Biweekly Tracker were “very concerned” about rising gas prices in the US as a result of the war. Nearly as many (53%) were very concerned about continued overall inflation.

The survey, conducted by Ipsos, measures consumer sentiment over time. Responses were collected this week as the average price for a gallon of gas reached $ 4.32 — and will likely continue to climb. 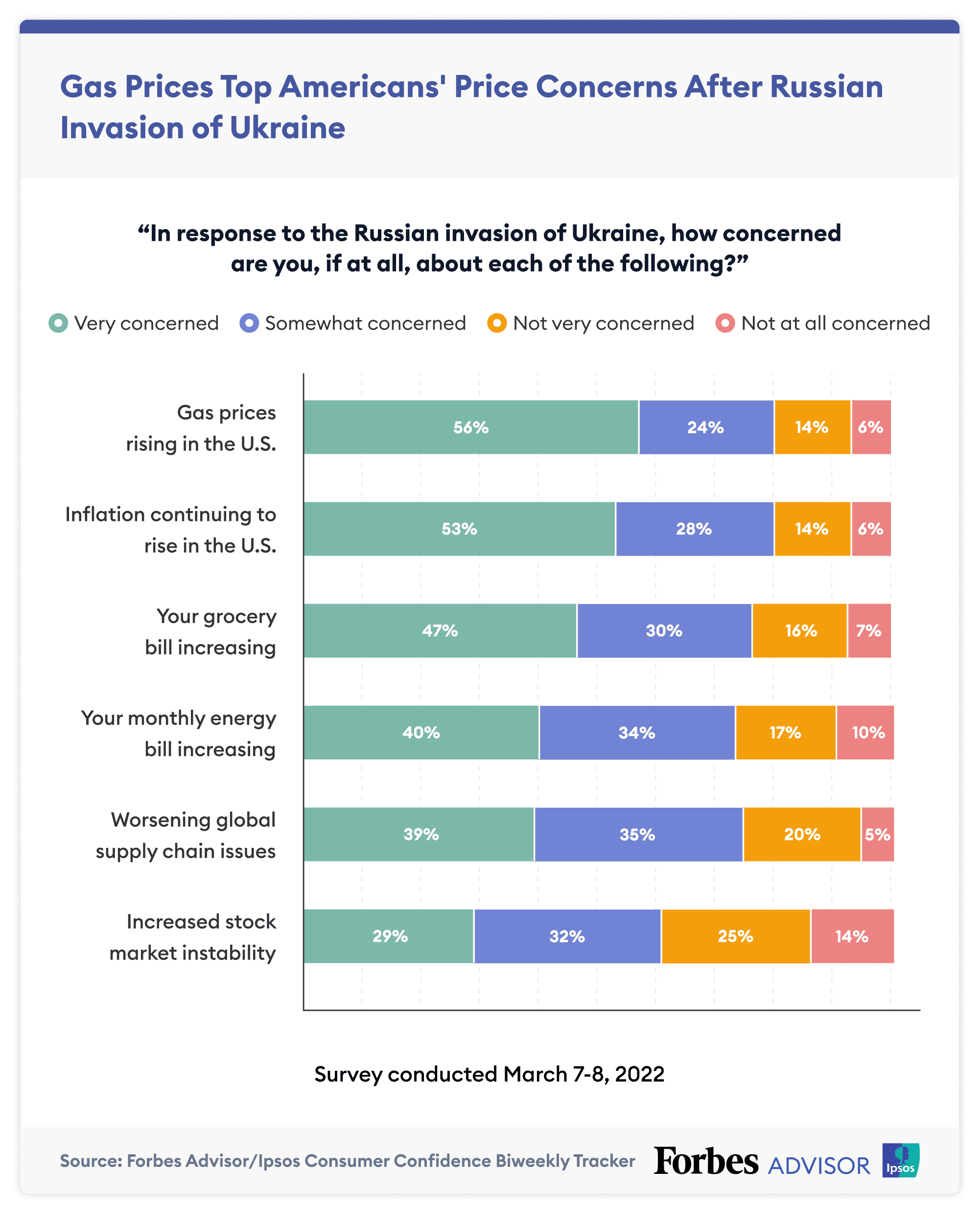 Grocery and energy costs along with the supply chain issues that have ensnared them also weigh on consumers’ minds.

“Coming into the year, we thought inflation would start to moderate in the spring because of supply chain issues abating,” says Anthony Saglimbene, global markets strategist at Ameriprise Financial. Last fall, the White House took action to reduce congestion in US ports to alleviate shipping delays for the holiday season.

But “inflation pressures are going to linger longer” due to increases in energy and food prices as well as the Russia-Ukraine conflict, Saglimbene says.

Energy and food price increases are most visible to consumers, he notes, and can immediately affect their behavior in everyday life.

Once the US replaces its supply of oil and other energy products it previously got from Russia before banning imports, volatility will likely start to stabilize, Saglimbene says. But that’s probably going to take a few months.

In the meantime, consumers may still spend on gas and groceries because they have to, but are likely to reduce spending elsewhere.

Americans Report Being on Solid Financial Footing, Despite Inflation

The monthly inflation report released on March 10 shows Americans are right to be worried about their wallets: Consumer prices in February 2022 were 7.9% higher than February 2021, the fastest inflation rate since January 1982.

Protein like meat, fish and eggs cost 13% more than this time last year, and electricity costs have increased 9%. Rent has increased just over 4% overall (although in some regions, it is dramatically higher), while used cars and trucks have jumped in price by 41% over the past year.

Americans are still in a good position to weather price shocks, Saglimbene says, because the job market is good and some households still have excess savings. And there’s a desire to do “more normal” activities coming out of the pandemic, which is driving spending. “Those behaviors help counter some of the [consumer] fear around rising costs, ”he says.

Although the US doesn’t rely on crops from the Russia-Ukraine region, disrupted supply chains are likely to continue to influence food prices.

The Forbes Advisor-Ipsos survey saw a remarkable decrease in confidence when it comes to making major purchases such as a car or home. Only 38% of respondents said they feel more comfortable making such a purchase compared to six months ago. It’s a decrease of four points from two weeks ago, and 10 points lower than this time last year.

Purchasing confidence for household items has also dropped from a year ago. This week, 42% of respondents said they’re more comfortable making household purchases than six months ago; last March, it was 53%.

The one area where Americans are feeling good: jobs. The jobs index increased a few points this week, reflecting Americans’ growing confidence in what’s still a worker’s jobs market.

The unemployment rate, reported March 4, dropped to 3.8%, with job growth across the leisure and hospitality sectors as well as professional services, health care and construction, according to the Bureau of Labor Statistics.

Investors Should Be Patient

Among financial concerns exacerbated by the crisis in Ukraine, volatility in the stock market was the least worrisome to respondents of the survey. Only 29% reported being “very concerned” about stock market instability, and 32% were “somewhat concerned.”

Saglimbene says the current market shock hasn’t been prolonged enough to change behavior for many investors. “Investors have been trained for a good period of time, many years, in particular since the pandemic, that when you see volatility… it’s an opportunity” to evaluate and reposition your investments, he explains.

But if you’re a passive investor who doesn’t check your portfolio often, you may not have noticed recent market fluctuations. In fact, if your retirement is far off, some experts recommend ignoring your account statements for now to resist making rash moves.

If you have a well-diversified portfolio allocated according to your risk tolerance, you’ll probably weather volatility and still come out wealthier on the other side of a dip, Saglimbene says.

“You don’t want to make knee-jerk reactions,” he advises. “I know it’s scary, particularly for retirees that have less time to make up losses. But this is where you need to be really disciplined and follow your allocation. ”

Survey methodology: Ipsos, which surveyed 922 respondents online on March 7 and 8, provided the results exclusively to Forbes Advisor. The survey is conducted biweekly to track consumer sentiment over time, using a series of 11 questions to determine whether consumers feel positively or negatively about the current state of the economy and where it looks to be going in the future.