The above headline is an obvious play on President John F. Kennedy’s historic speech in front of the Berlin Wall: “Ich bin Ein Berliner” – “I am a Berliner!” The horrific unprovoked war on the innocent people of Ukraine perpetrated by Russian dictator Vladimir Putin resonates deeply with me, not only as a journalist but as an American Jew whose family on my mother’s side lived in Ukraine before many of them immigrated to the United States in 1906-08.

The large DeWoskin family in Ukraine included the city of Glukhov, which is in the direct path of one of the large Russian Army attacks on the independent and sovereign nation. Had not my great grandparents, Naphtali and Zelda DeWoskin, and maternal grandparents, Max and Sarah Tolstoi DeWoskin, and their three children Allen, Minnie, and my mom, Lilian, booked passage on The Empress of Ireland in 1906, their descendants could have been caught in the crossfire between Putin’s Russian Army and the brave Ukrainian Resistance.

If the above were not enough, Glukhov, a city with a population of around 32,000, is close to the nuclear ghost town of Chernobyl, site of the most severe nuclear disaster in history. Russian and Ukrainian troops fought a pitched battle over the site to prevent its smoldering radioactive ruins from being weaponized. Nuclear weapons have been put on high alert by Putin over the weekend.

In addition, Glukhov and his environs were in the direct path of Adolf Hitler’s Nazi troops who stupidly invaded the Soviet Union in 1941. The USSR’s Red Army then joined the Western Allies in mobilizing to defeat Hitler and the Axis powers.

Connect with your community every morning. 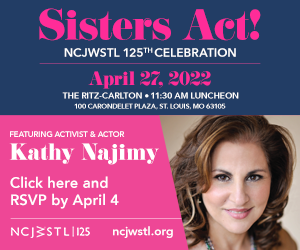 As Jews, we are immensely proud of the brave (and Jewish) President of Ukraine, Volodymyr Zelensky, who has been described as “Ukraine’s Churchill” for standing with the people who democratically elected him.

As Jews, we are acutely and viscerally aware that we are at the mercy of borders, boundaries, and despots. The political “us” is indeed personal. When I look at the map of my mother’s hometown, I think to myself “There but for the grace of God go I.” And like all who cherish freedom and despise dictators, from Pharaoh to Haman, from Hitler to Putin, today each of us can say Ich bin Ein Ukrainer.

Robert A. Cohn is Editor-in-Chief Emeritus of the St. Louis Jewish Light.