Pavlo Kaliuk, a freelance property broker in Ukraine’s capital, used to sell and rent properties to clients from the United States, France, Germany and Israel. Then in November, when Russia first began posting troops along the country’s border, the deals quickly dried up.

“In Kyiv, if you are talking about apartments which are medium level or higher, most deals are on pause because we are really not sure what will happen tomorrow,” said Kaliuk, 34.

Ukraine, which has been at war with Russia since 2014, is once again in a state of fearful suspended animation. The United States estimates that a combined 190,000 Russian troops and Moscow-backed secessionists are encircling the country and inside separatist-held territory as President Joe Biden and other Western leaders warn that an invasion or attack could happen any day and leave tens of thousands of people wounded or killed.

Without outright declaring war or taking action that would trigger the harsh sanctions promised by the West, Russia’s president, Vladimir Putin, has once again succeeded in destabilizing Ukraine and making it clear that Russia could wreck the country’s economy. The evacuation announced last week of US, British and Canadian citizens has led to panic. Several international airlines have stopped flights into the country. Russian naval exercises in the Black Sea have exposed the vulnerability of Ukraine’s critical ports for commercial shipping.

As for real estate?

“The number of requests is fewer and fewer every day,” Kaliuk said.

The anxiety coursing through Kyiv is exactly what Putin hopes to achieve, according to Pavlo Kukhta, an adviser to Ukraine’s energy minister. “What they want to do is the equivalent of winning the war without firing a single bullet, by causing massive panic here,” Kukhta said.

Timofiy Mylovanov, chairman of the Kyiv School of Economics and a former minister of economic development, said his institution has estimated that the crisis has already cost Ukraine “several billion dollars,” just in the past few weeks. War or a long siege would only worsen the situation.

“You either get an invasion or your economy hurts,” he said. 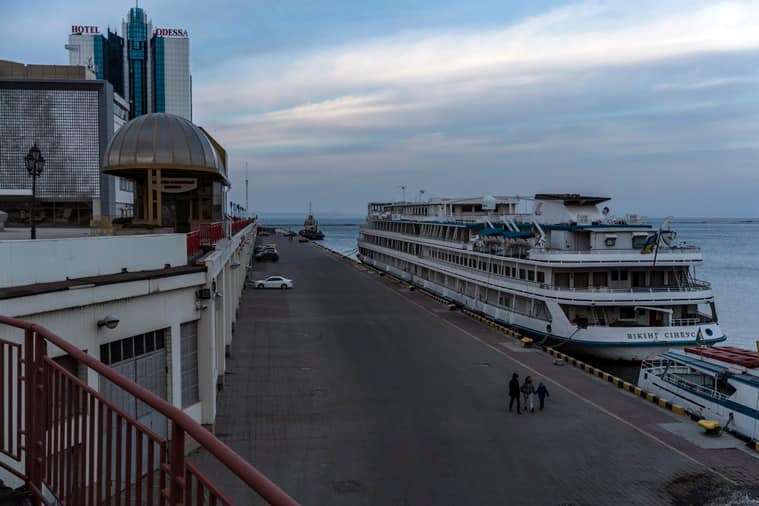 The first major blow came Monday when two Ukrainian airlines said they were unable to acquire insurance for their flights, forcing Ukraine’s government to create a $ 592 million insurance fund to keep planes flying. On Feb. 11, London-based insurers had warned aviation companies that they would be unable to insure flights to Ukraine or those flying above its airspace. KLM Airlines, a Dutch company, responded by saying it would stop flights. Many Dutch passengers were onboard Malaysia Airlines Flight MH17 when it was shot down above territory controlled by pro-Moscow rebels in 2014. German airline Lufthansa said it was considering a suspension.

On Tuesday, Ukraine was subjected to a massive cyberattack, as hackers flooded the servers hosting websites until the servers became overloaded and shut down. Officials blamed Russia, although the Kremlin denied involvement. Still, Ukrainian officials said it was the largest distributed denial-of-service attack in the country’s history and targeted government ministries and state banks.

“They want people to start running on the banks,” Kukhta said. “The war is a hybrid the Russians are playing in several domains, the economy included.”

Earlier in the week, Irina Gorovaya and other entrepreneurs in Kyiv organized a “Stay In Ukraine” campaign to try to rally people behind local businesses that are being hit by the economic upheaval. Gorovaya, CEO of Mozgi Group, a creative agency, said festivals and other events were losing money rapidly because people are too hesitant to buy tickets.

“People are sitting at home thinking about what will come tomorrow,” she said.

On Ukraine’s southern coastline, the arrival of the Russian navy to conduct exercises in the Black Sea has been another reminder of Ukraine’s vulnerability, militarily and economically, since in the event of war the country’s critical ports could face a blockade. So far, Russia has allowed a corridor to remain open for commercial shipping, and there have been no disruptions to operations at Ukrainian ports.

“We don’t have any guarantees, but for now we’re operating normally,” said Alexander Mukhin, who works in the development office at the port in Mykolaiv, in southern Ukraine.

On a visit to the port this week, the sweet, burned smell of sunflower oil, one of Ukraine’s primary exports, hung in the air. The oil was being pumped through a series of pipes into a bright red Italian vessel, the Saracena. Ukraine exports about 300,000 tons of sunflower oil a year.

During World War II, the port was the scene of fierce fighting; a portion of it has not yet been repaired from the heavy bombing that occurred when Soviet forces fought to retake it from the Nazis.

The port of Odessa, the country’s largest oil and gas terminal and a major hub for grain exports, is also considered a possible target, especially given the significant sympathy in the city for pro-Russian separatists in 2014. Some military analysts have warned that Russia might try to take Odessa if the military invades.

But even without an all-out blockade or attack, the ports can still be hobbled by fear of risk among international insurers. London’s marine insurance market Tuesday listed the Russian and Ukrainian waters in the Black Sea and the Sea of ​​Azov as high risk, making it more expensive to ship goods to and from the ports. This will add more economic pressure to Ukraine, which relies on its Black Sea ports to export grain.

A retired U.S. Army lieutenant general, Ben Hodges, recently compared the Russian land and naval forces encircling the country to “a boa constrictor around Ukraine, choking its economy and further threatening its sovereignty.”

The Kremlin aims “to make Ukraine a failed state, which they believe they can achieve by applying constant pressure,” he posted on Twitter, “without actually launching a new offensive.”

But the US response to the crisis has also infuriated some people, whether by creating panic with alarmist warnings of an imminent invasion or the decision to evacuate some embassy staff from Kyiv and set up a temporary office in the western city of Lviv, close to the border with Poland.

“When someone decides to move the embassy to Lviv, they must understand that such news will cost the Ukrainian economy several hundred million dollars,” David Arakhamia, leader of the ruling Servant of the People’s Party, said in a television interview, adding: Every day we count the losses of the economy. We can’t borrow in foreign markets because the rates there are crazy. Many exporters refuse us. ”

Olena Bilan, chief economist of Dragon Capital, an investment firm, said Ukraine’s economy had been expected to grow by almost 4% this year, but the military crisis has shaved that predication by almost half.

Even so, Bilan said, Ukraine is far better prepared economically than when Russian aggression began in 2014. Its foreign currency reserves are at historic highs, and it has largely decoupled its economy from Russia, aside from imports of oil and coking coal for the steel industry.

Ukraine is also preparing to separate itself from the Russian power grid, said Kuhta, and financial assistance from the European Union and the United States is helping to reassure investors and worried insurance companies.

“We live in such conditions which are not so stable for eight years already,” said Kaliuk, the real estate agent. “I’ve gotten used to it and try to be flexible.”

Today, Kaliuk said, only one group of foreign investors seems unperturbed – Belarusians trying to escape from the strongman rule of Alexander Lukashenko, one of Putin’s closest allies.

“Ukraine is the borderland between the free world and the world of dictatorship,” Kaliuk said. “We are lucky we are on the good side of the border. This is our fate, to protect our own freedoms and have solidarity with the free world. ” After thinking for a moment, he added that it was not “luck”; that it had been paid for with the blood of those who died in the 2014 uprising that drove a Moscow-backed government from Kyiv and of the 14,000 people who have died in the ensuing war. “We have to fight for it,” Kaliuk said.