Mikko Hautala, the Finnish ambassador to Washington, has met Russian President Vladimir Putin over a dozen times. They’ve even spent time at a sauna together.

Hautala has represented Finland abroad for over two decades, but he is also an expert on all things Russia. One senior US diplomat even called him Washington’s “Russia whisperer.“ Few understand Russia better than their Finnish neighbors, and there are few Finns with the type of experience bridging Russian and Ukrainian history than Hautala.

Before being posted to Washington in 2020, Hautala served as Finland’s ambassador to Moscow for four years. And before that—long before that—he cut his teeth as a young Finnish diplomat posted to Ukraine, where he learned the language and culture. This makes him better suited than just about anyone in Washington these days to weigh in on the war that has gripped Europe for six months—and the Russian autocrat who started it.

In many ways, even though he’s nearly 5,000 miles from the front lines in Washington, this war is personal for Hautala. This was clear on March 2, six days after Russian missiles began raining down on Ukraine, during an event at the Finnish Embassy called “Sounds of Happiness.” It was planned as a celebration of Finland’s ranking as the happiest country in the world for the fifth consecutive year, but Hautala took to the stage alongside his Ukrainian counterpart, ambassador Oksana Markarova.

The ambassadors stunned the audience with a linguistic double act: Hautala, the Finn, beginning his speech in fluent Ukrainian, and Markarova translating simultaneously into English. Hautala recounted a conversation in 2014 with then-Ukrainian President Petro Poroshenko, who asked Hautala how he spoke Ukrainian so well. Markarova translated Hautala’s response from her native tongue back to English for the audience: “My answer was that’s because the Ukrainian language is not in my head. It’s in my heart.”

Months after the comedy night, with the war in Ukraine still raging, I had more urgent and existential questions for Hautala based on his extensive experience in the world of diplomacy: Will Russia ever back down in Ukraine? How long can Putin hold onto his power given how disastrously the first phase of this war went for him? Has Putin lost his marbles?

To tackle these questions, I met Hautala at the Finnish Embassy during Washington’s sweltering dog days of summer. His office, in the postmodern industrial embassy, ​​is off a crisp wooden staircase in that elegant-modern-minimalist-chic style that only the Scandinavians can pull off. Mercifully, it was also well air conditioned. We snacked on melt-in-your-mouth chocolate-covered toffee candies—a Finnish brand, of course.

First up was the matter of Helsinki’s glacially slow-turned-lightning speed journey to join NATO. In the past few months, a bulk of Hautala’s job was consumed by monitoring the progress of a Senate vote to admit Finland and Sweden to the alliance. All 30 NATO countries have to approve adding any new member to the alliance. For the United States, this required the Senate to approve a resolution ratifying Finland and Sweden’s applications.

Even though Senate leaders signaled for months that they would have enough votes to greenlight Finland and Sweden’s membership, Hautala could not take the final tally for granted. It is Congress we’re talking about after all, and there was always the chance of a political curveball derailing an otherwise easy vote. Hautala spoke with dozens of lawmakers on both sides of the aisle and trudged to Capitol Hill almost daily for meetings ahead of the vote. “I think I have basically visited the Hill every day of a working week,” he told me. (We met shortly before the Senate vote, which was on Aug. 3.)

In the end, it was a blowout: 95 senators voted in favor of Finland and Sweden’s membership. Only one person, Missouri Republican Sen. and former US President Donald Trump acolyte Josh Hawley voted against it. (Republican Sen. Rand Paul, long a skeptic of NATO expansion, voted “present.”) It helps that Finland, about as modern and stable a democracy as they come, has one of the strongest militaries in Europe, one that cooperates and trains closely with NATO militaries. 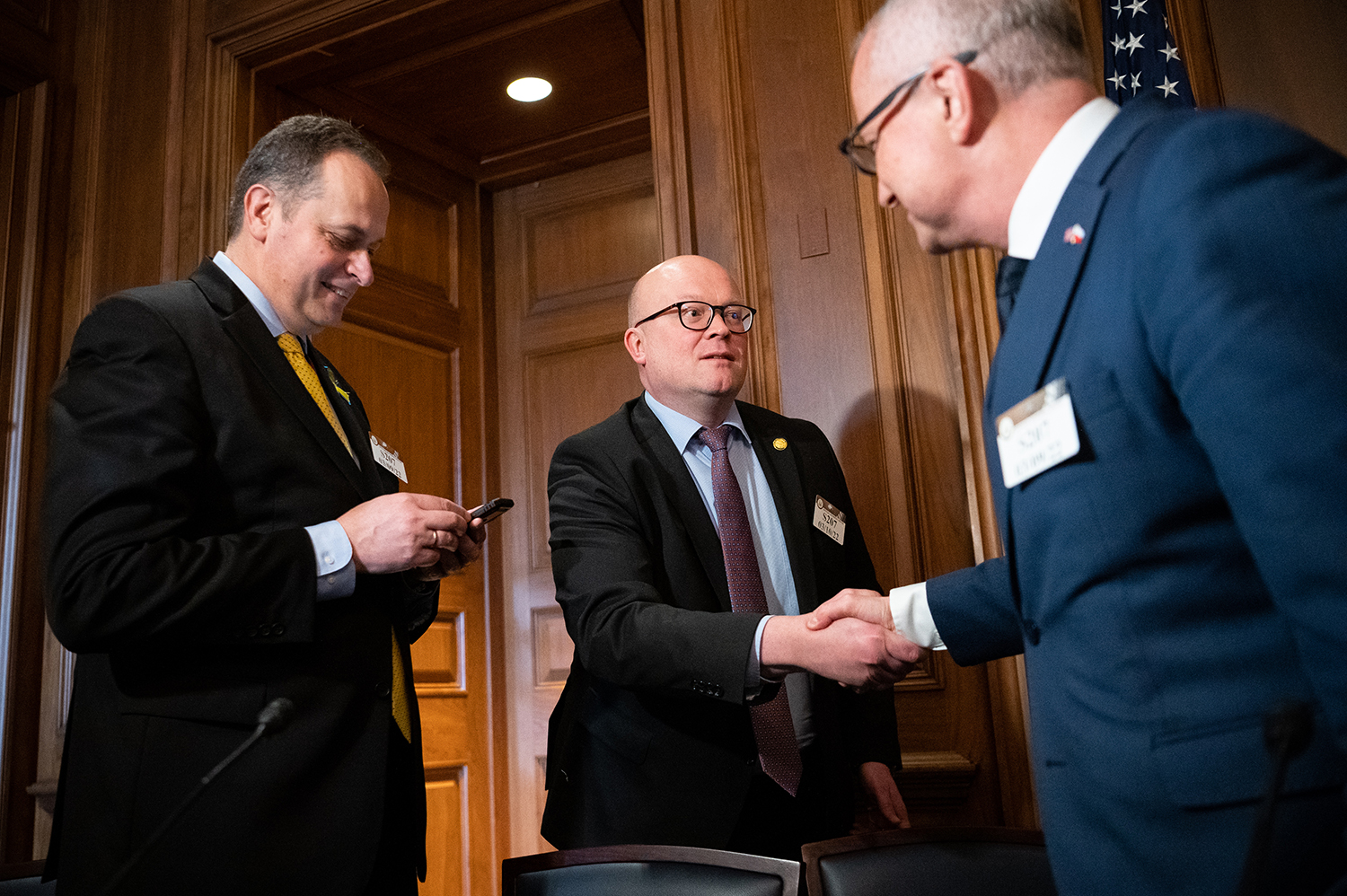 Finnish Ambassador to the United States at the US Capitol

Mikko Hautala, the Finnish ambassador to the United States (center), meets with his Latvian and Polish counterparts before a meeting with senators about Ukraine at the US Capitol in Washington on March 10. Graeme Sloan/Sipa USA

Hautala got to enjoy a brief victory lap, cutting short a vacation to attend a White House ceremony on Tuesday alongside US President Joe Biden, who signed the documents formally endorsing Finland and Sweden‘s NATO membership. “This major step solidifies the US-Finland bond,” Hautala said in a statement. “In Finland, the US will gain a reliable ally used to carrying more than its weight.”

For decades, Finland spurned calls to join NATO even as it deepened security cooperation with the alliance outside its borders, effectively telling the alliance it was fine where it was. That all changed rapidly after Russia’s full-fledged invasion of Ukraine, when public support in Finland skyrocketed from some 20 percent to nearly 80 percent. From there, Finland’s government formally announced it wanted in on the alliance while neighboring Sweden followed suit.

The war in Ukraine deeply shocked Finns, whose own history of Russian invasion profoundly shaped Finland’s foreign policy for decades. During the Winter War of 1939-1940, an outgunned and outmanned Finland beat back a massive Soviet military invasion orchestrated by then-Soviet leader Joseph Stalin, and ultimately only lost around 10 percent of its territory to the Soviet Union.

Hautala sees many parallels between the Winter War and the current war in Ukraine. Putin, like Stalin in Finland, initially expected his war to take a matter of weeks, if not days. The Ukrainians, like the Finns with Stalin, proved him wrong. In both cases, the Kremlin’s military paid a devastating price.

“I think Stalin was, prior to the Winter War, he was a realist,” Hautala said. “Then, when the war started, I became a maximalist, so I wanted to have all of Finland. But only when that proved to be too costly and too risky, I agreed to peace.”

“We know that Ukrainians have the will to defend. And as a Finn, I feel huge respect for Ukrainians,” he added. “Me and my generation, we cannot claim any kind of co-participation in our country’s defense. But I think, historically, we know how it feels.”

Then we turned to Russia itself. In his soft-spoken yet blunt manner, Hautala poured cold water on the assertion that Putin is either off his rocker or that his days in power are numbered. “At the moment, he‘s retaining his power,” Hautala said. “And gift‘I don’t see any real challenges to that. And frankly, I don’t‘t expect that there will be any major challenges at least in the near future.”

“I think he’s a fully rational leader,” I continued. “Then, of course, you can question that: Is his reading of the world the right way? But I wouldn’t‘t go and say that he‘s irrational.”

Hautala sees the conflict in Ukraine as a new, violent manifestation of how Russia will permanently reorient away from the West. “Russia is changing fundamentally as a society, as a political system, as an economy,” he said. “They will be linked more to China, not Europe or the US, but other global players.”

This shift in foreign policy, he believes, is so profound that it transcends Putin himself. “Even if, for some reason, things would change in Moscow, I think the idea that Russia would then simply come back to its senses, I think it‘It’s too simplistic.”

There’s plenty of evidence to suggest that Moscow is on to something here. Just look at how the West versus “the rest” have responded to the war in Ukraine.

While the United States, Europe, and its other allies around the world have backed Ukraine with military aid and sanctioned Russia to the hilt, Ukraine has struggled to get other major players—namely China, India, and key economic powerhouses in Africa and Southeast Asia — on board. Indonesia bucked Western pressure to invite Russian Foreign Minister Sergey Lavrov to a recent G-20 summit it hosted. India is still importing Russian oil despite pleas from the West. Last month, Lavrov launched a charm offensive tour of Africa, at least attempting to position Russia as a new great-power advocate for the global south.

During Hautala’s years of dealing with Russia in the upper echelons of the Finnish foreign ministry, including his time as ambassador to Moscow, he saw two major schools of thought take root in Russia’s policymaking elite that lay the groundwork for this new permanent shift away from the West.

“If I look at the past 10 years during which I‘ve been really actively involved with the Russians, one of the features I saw that was growing all the time was this obsession with history and borders,” he said. “The second was this obsession with the idea that a new multipolar world is taking shape, that big wheels are turning, that the West is in decline and there will be a new power equilibrium in the world that will favor Russia.”

I referred to this obsession as a “geopolitical power dream”—one that many Westerners dismissed as mere rhetoric on Putin’s part, deployed simply to score some political points at home. Sure, Putin could talk a big game: about how Russia deserves to be a great power again, how the West should back off of trying to court countries like Ukraine and Belarus because they belong in Russia’s “sphere of influence,” how the dissolution of the Soviet Union was a “tragedy.” But that didn’t mean he’d actually try to remake an ersatz Russian empire by force, would he?

Here, Hautala sat back in his chair with a pensive expression.

“Many of us made a mistake,” I said. “I think most of us simply concluded that this is a kind of nostalgia politics. But I think most of us didn’t‘t see or didn’t‘I don’t want to conclude that this [Russian] obsession with history was actually a blueprint for war.”