On March 25, Ukraine’s Ministry of Defense created a Facebook post, asking its citizens to use commercial drones and participate in a mass patrolling program to conduct reconnaissance of army movement from the Russian side.

The post read: “Do you have a drone? Put it to use for the experienced pilots! Do you know how to operate a drone? Join the joint patrolling with units 112 separate brigades of the city of Kyiv! Kyiv is our home, defending it is a common task. #StopRussia You and your drone need Kyiv at this fierce moment! ”

Even if people aren’t particularly skilled at flying their own drones, they’re still being urged to bring them in so that expert drone operators can use them for surveillance during this critical period. The Facebook post has made Ukraine’s trained drone pilots participate in the reconnaissance program and those who are not as experienced have volunteered to lend their drones to the drone brigades to carry out the same.

Most of the high-performing drones today in the commercial market belong to DJI, which stands for Da-Jiang Innovations, a Chinese technology company headquartered in Shenzhen, Guangdong, with manufacturing facilities around the world. DJI is one of the top manufacturers of civilian drones which are extensively used for drone photography, videography, drone flying, sports, etc, and are now being used as a tool to spot army troop movements on both sides of the border.

In some cases, we have also seen drones in Ukraine being used to drop Molotov cocktails. A Molotov cocktail is an incendiary weapon typically thrown by hand, consisting of a glass bottle filled with flammable substances equipped with a fuse. In use, the fuse attached to the bottle is lit and the bottle is thrown, shattering on impact as explosives against incoming Russian troops.

The small flying drone was developed by the Ukrainian Territorial Defense Forces and appears to have four blades. Its center console has a spot to hold the Molotov cocktail horizontally before it is remotely deployed. 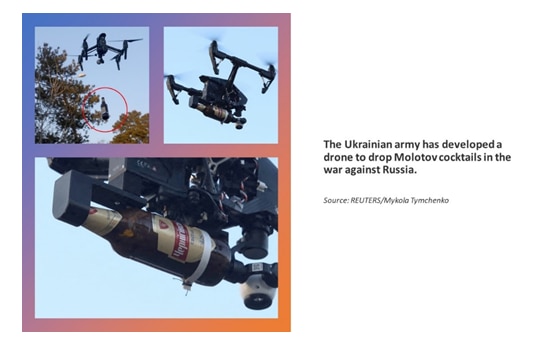 One of the Twitter users who closely follow the use of drones in combat reported the procurement of multiple new DJI drones by Ukrainians to carry out aerial monitoring.

bruh …. It seems that Ukraine has got the DJI drone from China. pic.twitter.com/IefTPxOlSa

Many Ukrainian drone enthusiasts are also requesting support from outside in order to procure more drones. Jacob Cereteli, a drone developer from Kyiv, posted the below on LinkedIn.

“To all my contacts in Poland and other countries. Ukraine needs your support. We need small parts for drones. Batteries, servos etc., are ready to collect from the border. Anyone who can help with purchasing, please let me know. We can pay immediately. If you are able to help, send me your phone number via DM. ” In the Ides of March, a Ukraine-based drone operator, Taras Troiak, posted a shocking video of a DJI drone being targeted by a rocket grenade from the Russian side moments after it landed completing a reconnaissance flight.

Owing to a defective setting, the timestamp on the video shows up as September 15, 2016. But this was widely reported by multiple international drone communities and users and is thus verified. It is reported that Russia may be using the DJI Aeroscope drone detection system to systematically monitor and target civilian drones from the Ukrainian side.

To catch a glimpse of how it works, watch this video on YouTube.

We have seen how the DJI Aeroscope has been used in the past to prevent rogue drones from flying into high-profile events like the Royal wedding.

Taras, who is also the chairman of the Ukrainian Federation of UAV Owners, reported that the Russians have installed a DJI Aeroscope system in Chernobyl with a working range of 30-40 miles to spot Ukrainian defense forces who fly DJI drones.

Drone expert and product engineer @vshymanskyy explained that DJI Aeroscope is basically a piece of proprietary hardware allowing to track the movement of any DJI drone in the range of 10 km. Along with supplementary DJI-made antennae, the range can be extended up to 50 km.

“Besides that, Aeroscope technology allows one to see the EXACT position of the drone operator as well as his personal details which he used when registering with DJI.”

DJI rejected accusations that it is leaking data on Ukrainian military positions to Russia.

On the Russian front, there have been reports that they too are using DJI drones to perform reconnaissance operations on the Ukrainian side.

Shadi Alkasim (@Shadi_Alkasim), a certified anti-terrorism expert and an OSINT researcher, shared images of what seems to be a set of DJI Mavic 3 Combo drones being used by the Russian forces. These were apparently left behind when the troops were in a hurry to move from one point to another. The boxes had been left behind by a drone unit of the Russian army in a pile of rubble next to a damaged military truck.

The #Russian Ongoing Aggression Against #Ukraine
DJI Mavic 3 Combo #dronethese drones are being used by the Russian army in Ukraine pic.twitter.com/HsjsreW90x

IS DJI FAVORING THE RUSSIANS?

Recent press releases from the Ukraine government had objected to the use of DJI drones and called them “a security risk for Ukraine’s military and civilians.” DJI, being a Chinese firm, has made them the bad guys owing to the proximity between China and Russia in the past. But China has mostly tried to distance itself from the Russia-Ukraine conflict this time.

In a public tweet, Ukraine’s Deputy Prime Minister Mykhailo Fedorov said, “In 21 days of the war, Russian troops have already killed 100 Ukrainian children. They are using DJI products to navigate their missile. @DJIGlobal are you sure you want to be a partner in these murders? Block your products that are helping Russia to kill the Ukrainians! ”

In 21 days of the war, Russian troops have already killed 100 Ukrainian children. they are using DJI products in order to navigate their missile. @DJIGlobal are you sure you want to be a partner in these murders? Block your products that are helping russia to kill the Ukrainians! pic.twitter.com/4HJcTXFxoY

DJI directly responded to this tweet as below saying all DJI products are built and designed for civilian use and not military specifications and that using the DJI Aeroscope for military purposes was inappropriate. DJI also added that the broadcasting of flight information in DJI drones is built-in and cannot be turned off.

The kind of data broadcast by every single DJI drone has been documented by Nico Shiller (@ 74ck_0), a security researcher. He adds every DJI drone broadcasts this data all the time. The same can be received and decoded over the air as there is no encryption.

He also says even without a DJI Aeroscope, the following details can be received from every flying DJI drone. “The Drone-ID sends high-accuracy GPS positions of drone, pilot, and ‘home point’ (where the drone returns to). The packets are sent basically every second, revealing the full flight path. Along with GPS, it discloses drone type and serial number. ”

This is precisely why these drones are made purely for civilian use and not for military specifications as confirmed by DJI. Following this exchange with the Ukrainian government, DJI decided to suspend its operations with both Russia and Ukraine to avoid further controversies. In its statementDJI stated that “DJI is internally reassessing compliance requirements in various jurisdictions. Pending the current review, DJI will temporarily suspend all business activities in Russia and Ukraine”.

In its response to Ukraine’s Vice Prime Minister, DJI had also stated that if Ukraine sent an official request, DJI would turn on geofencing – a system that restricts where drones may operate – to prevent any DJI drone from operating in the country, something like creating a no-fly zone for these DJI drones. But, DJI also added that the system may not be “foolproof”.

Taras adds: “The Russian Army has a lot of stationary Aeroscopes (UAV monitoring complexes) from Syria with an extended distance of up to 40 km.”

While DJI has suspended operations, the threat remains from the Russian side, owing to Russia developing additional hardware and software components to extend the capabilities of their Aeroscope systems. “This involves large reverse-engineering efforts,” says @vshymanskyy.

He also adds: “Lately, Ukrainian Aeroscope installations have been experiencing numerous failures of unknown origins. Those are UNLIKELY to be caused by DJI Global. But an official hypothesis about internet or power outages is also not realistic. The exact reason is being investigated. From the practice of using the drones for reconnaissance purposes it is highly preferable to replace DJI drones with custom-made ones or sourcing drones from other producers, esp. those that are not affected by Aeroscope technology. ”

The story has been compiled with the help of multiple OSINT analysts and sources like @BillyBostickson, @vshymanskyy, @ 74ck_0, @Shadi_Alkasim, @Sweet_Jason_HZ and Dronexl.co.

(The writer is a Singapore-based Open-Source Intelligence analyst)