Commentators on social media have speculated about Russian President Vladimir Putin’s health in recent weeks, suggesting that the notorious leader seems to be showing signs of fatigue and possible illness amid the ongoing military invasion of Ukraine launched on February 24.

In an exclusive recording obtained by New Lines Magazine, an oligarch close to the Kremlin can be heard saying that Putin is “very ill with blood cancer.”

The specific type of blood cancer was not specified, the magazine said, noting however that “the recording represents rare testimony by someone with proven ties to the Russian government that its fanatical dictator may well be seriously unwell. And the oligarch had no idea he was being recorded. ”

Putin, 69, has suffered some injuries throughout his political career, mainly to his back after falling on different occasions – once from a horse and another time during a 2017 hockey match.

In more recent videos, the Russian president can be seen limping. A video of a meeting between Putin and Russian Defense Minister Sergei Shoigu from April showed Putin tightly clutching onto the table while appearing restless throughout the meeting. Some have suggested his condition in the video pointed to a case of Parkinson’s disease.

Putin is hailing Russia’s “liberation” of Mariupol after his forces completely destroyed during a two-month siege.

He told defense minister Sergei Shoigu to block off the Azovstal metallurgical plant, where the last Ukrainian troops are holed up, “so that a fly can’t get in.” pic.twitter.com/g2lNd44qXF

The newly revealed dramatic comments were reportedly made during a mid-March meeting between the unnamed Russian oligarch and a person described by the magazine as a “Western venture capitalist” who provided the recording on condition of anonymity.

“He absolutely ruined Russia’s economy, Ukraine’s economy and many other economies – ruined [them] absolutely, ”said Putin’s oligarch. “The problem is with his head… One crazy guy can turn the world upside down.”

New Lines claims to know the identity of the oligarch heard speaking in the recording, but said it was withholding his identity due to the high probability that disclosing his name would lead to state retaliation against him.

Russian oligarchs have much to lose in the current reality, the magazine noted, citing the suspected attempted poisoning of Jewish Russian billionaire Roman Abramovitch, who showed signs of poisoning while attempting to mediate in the negotiations between Russia and Ukraine.

The magazine did, however, confirm that the oligarch was outside Russian territory and had a net worth that placed him on the list of the 200 richest businesspeople in Russia.

The oligarch went on to dismiss the Russian war effort in Ukraine and its official pretext of “trying to find Nazis and fascists” in its neighboring country. He blamed Putin personally for the killing of “more than 15,000 Russian soldiers and 4,000 or 5,000 civilians in Ukraine.”

“It’s unbelievable,” he said. “For what? He killed more people than in 10 years in the [Soviet] Afghan war. ” 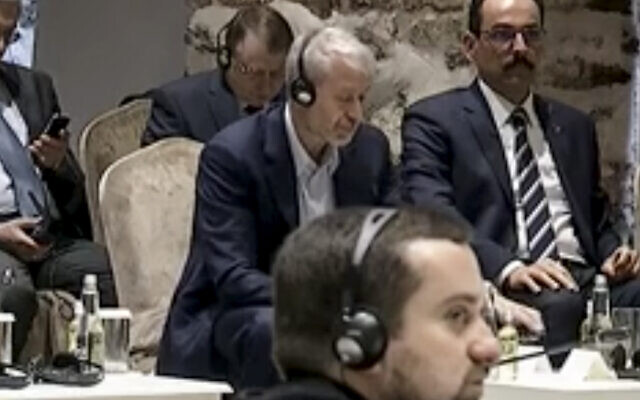 The report stressed that while the recording may serve as the first substantial evidence of Putin’s health condition, it may also be part of a disinformation campaign led by the Kremlin – a tactic Russia is well-known for using.

“Their instinct is to lie and spread disinformation on the one hand, and so this chatter may be an effort to deflect attention,” John Sipher, a former CIA officer, told New Lines.

“Or, equally likely, we are seeing flashes of elite infighting,” Sipher said.

“Putin has long acted as the de facto mafia boss of the Kremlin, the arbiter between those fighting for influence or money. Those clans are now positioning themselves to survive no matter how this crisis ends. Leaking Putin’s health crisis – or inventing one – would be one to gain leverage, ”the CIA officer noted.

We’re really pleased that you’ve read X Times of Israel articles in the past month.

That’s why we started the Times of Israel ten years ago – to provide discerning readers like you with must-read coverage of Israel and the Jewish world.

So now we have a request. Unlike other news outlets, we haven’t put up a paywall. But as the journalism we do is costly, we invite readers for whom The Times of Israel has become important to help support our work by joining The Times of Israel Community.

For as little as $ 6 a month you can help support our quality journalism while enjoying The Times of Israel AD-FREEas well as accessing exclusive content available only to Times of Israel Community members.

Thank you,
David Horovitz, Founding Editor of The Times of Israel