Amid overwhelming evidence that Russian forces have committed war crimes during an unprovoked war of aggression in Ukraine, Ukrainian officials were confronted this week with video that appeared to show Ukrainian soldiers shooting captive Russian soldiers in the legs.

Although Ukraine’s senior military leader and its domestic intelligence agency both insisted that the video posted on social networks on Sunday was “a fake” produced by Russia, an adviser to President Volodymyr Zelenskyy promised that the government would investigate and punish those responsible if the incident did. take place.

On Monday, a well-known Ukrainian journalist, Yuri Butusov, published a graphic video showing the charred remains of three men he identified as Russian soldiers killed as Ukrainian forces recaptured the town of Malaya Rohan, outside Kharkiv, over the weekend.

Although Butusov made no mention of the video of the alleged war crime, a visual analysis of his footage shows that it was clearly filmed in the same location as the video of the prisoners being shot, some time after that incident.

Reporting by open-source investigators and BBC News had already established that the video of the alleged war crime was recorded at a dairy processing plant in Malaya Rohan, which is about 3 miles east of Kharkiv.

I am inclined to think that this video was shot from about 49.939219, 36.477301
If so, it took place in Malaya Rohan, Kharkiv, which was reportedly recently liberated.
I think the shelter to the south was erected more recently than imagery I have seen.
Thoughts? https://t.co/J9MTeROua0 pic.twitter.com/5znAv3BepY

Multiple visual clues in Butusov’s video show that he discovered the burned bodies in precisely the same part of the dairy plant’s courtyard where, in the prior video, at least eight captives were filmed bleeding on the pavement, several with their hands bound behind their backs and bags over their heads.

According to Butusov, the editor of the Ukrainian news site Censor.net, he arrived in Malaya Rohan “a few hours after the battle” there. By that time, his footage shows, several of the buildings at the dairy factory had been partially destroyed by explosions or fire. Those same structures had not yet been damaged when the video showing the prisoners being shot was recorded.

The exact chronology of the battle for Malaya Rohan remains unclear. One Ukrainian commander, Sergey Melnik, claimed in a Facebook post on Friday that his forces had taken the village back that day. Other military sources told Agence France-Presse journalists who reported from the village on Monday that the effort to root out Russian soldiers had continued through the weekend.

Nothing in Butusov’s video proves how the men died, and the fact that their bodies were badly burned makes it impossible to say from the visual evidence if they were among the captive Russian soldiers seen in the earlier video. But the fact that these bodies were discovered in the same location where the video of the apparent war crime was recorded adds to the pressure on Ukraine’s civilian government to say whether its investigation has concluded that the incident did take place, and, if so, whether some of the captive Russian soldiers seen on video being tortured were also killed. 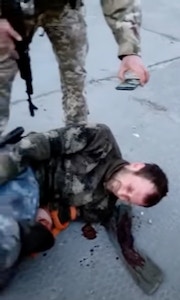 A screenshot from video said to show the abuse of Russian prisoners of war by Ukrainian soldiers.

How Ukraine deals with this video, which, if verified, would be evidence that Ukrainian forces in Malaya Rohan committed war crimes, could be a decisive moment for the country’s civilian leadership. Internal divisions between civilian leaders and career military and intelligence officers appeared almost immediately after the video generated a wave of anger on Russian social media channels.

Ukraine’s domestic intelligence agency, the SBU, a successor to the Soviet-era KGB, insisted that video of the Ukrainian military’s “allegedly abusing prisoners” had been fabricated by their counterparts in Russian intelligence. “Russian fakes are similar to Russian TV series: cheap vulgar predictable and with poor acting,” the SBU said in a statement. “Staged videos appear on anonymous Telegram channels: either about alleged ill-treatment of captured invaders or about injuring and even murdering the occupiers.”

“Such accusations are outright lies,” the agency said.

But in an interview on Sunday posted on his YouTube channel, Oleksiy Arestovych, an adviser to President Zelenskyy, told the Russian opposition figure Mark Feygin: “The government is taking this very seriously, and there will be an immediate investigation. We are a European army, and we do not mistreat our prisoners. If this turns out to be real, this is absolutely unacceptable behavior. ”

“I would like to remind all our military civilians and defense forces once again that the abuse of prisoners is a war crime that has no amnesty under military law and has no statute of limitations,” Arestovych said in a televised briefing on Sunday. “I remind everyone that we are the European army of a European country. We treat prisoners according to the Geneva Convention, no matter what your personal emotional motives. ”

“This is the right thing for any government to do: if allegations of war crimes emerge, at once investigate the incident and remind your forces of the laws of war,” Andrew Stroehlein of Human Rights Watch observed. “Let me know when the Kremlin says it’s taking the many allegations of war crimes by Russian forces ‘very seriously’ and announces investigations into them.”

Another adviser to the Ukrainian president, the former investigative journalist Sergii Leshchenko, has been providing a daily briefing to the public debunking “Russian propaganda fakes” that spread online. Given the statements from Ukraine’s intelligence service and the country’s senior military commander, it seems worth noting that Leshchenko has not claimed, during his televised briefings this week, that the video of the alleged war crimes in Malaya Rohan is one of those fakes.

Now that four days have passed since the video recorded in Malaya Rohan first appeared, it seems likely that the government should already have a sense of whether or not the incident took place, and yet there has been no public statement on the results of the inquiry. .

Spokespersons for Ukraine’s defense ministry, the general staff of its armed forces and the president’s chief of staff all declined to comment on the progress of the investigation into the video or to say if Sergey Melnik, the commander who announced the release of Malaya Rohan on Friday , had been questioned. Melnik is the head of the Military Law Institute of the Yaroslav the Wise National Law University in Kharkiv.

If a genuine investigation has been conducted, and the country wants to abandon the post-Soviet path chosen by Russia – of constantly lying about transgressions by its armed forces and intelligence services – this seems like a decisive moment for Ukraine’s elected civilian government.

One of the journalists asked me what was the worst thing I saw in this war. Children’s shoes scattered from the explosion in this kindergarten. pic.twitter.com/EmfoPaf1gk

A list of just some of the many transgressions of the laws of war by Russian soldiers includes: killing hundreds of civilians in the widespread indiscriminate shelling of apartment buildings, schools, hospitals, opera houses and theaters; forcibly deporting tens of thousands of residents of the besieged city of Mariupol to Russia; using cluster munitions and banned anti-personnel mines; and opening fire on peaceful protesters. Russian soldiers have also been accused recently of having raped a 15-year-old girl and filmed the crime.

Given the far greater amount of evidence that Russian forces have been guilty of war crimes, and the understandable fear of amplifying video that appeared on social media without a clear source, many news outlets have been wary of reporting on the video that appears to show Russian soldiers being abused. For instance, the last line of a CNN report on Ukraine’s pledge to investigate the video was: “CNN is not showing the video.”

Julian Röpcke, a senior journalist at the German news organization Bild who has been analyzing social media video of Russian abuses, told viewers on Monday that, “unfortunately,” he also had to show them video of the alleged war crimes at Malaya Rohan. Nonetheless, Röpcke, whose current pinned tweet is a selfie in front of Ukraine’s flag with the phrase “Glory to Ukraine” in Ukrainian, scolded followers who refused to accept that the video appeared to be genuine.

While there appears to be no definitive proof in the video of the prisoners being tortured that it is real, there is also no evidence that it is fake either. Meanwhile, a document that has circulated widely on social networks, allegedly showing that a senior Russian general had instructed Russian soldiers to fabricate evidence of Ukrainian war crimes, appears to be a forgery.

No doubt appalled by the media focus on the video of the alleged war crime by Ukrainian forces, many supporters of the country were quick to seize on obviously fabricated evidence that the viral clip was fake. One obviously false claim shared by Ukrainian activists was that some of the video of Russian soldiers being kneecapped was “a rehearsal” – with the supposed proof being a soundtrack from a film that was clumsily added to the clip.

Muhammad Idrees Ahmad, a lecturer in digital journalism at the University of Stirling who has tracked the impact of Russian disinformation in Syria, responded to that viral clip with the observation: “Ukraine is facing a war of aggression, so it’s a moral imperative to stand in solidarity with its people and defenders. But we can do this without turning into a mirror image of the Kremlin’s apologists. ”