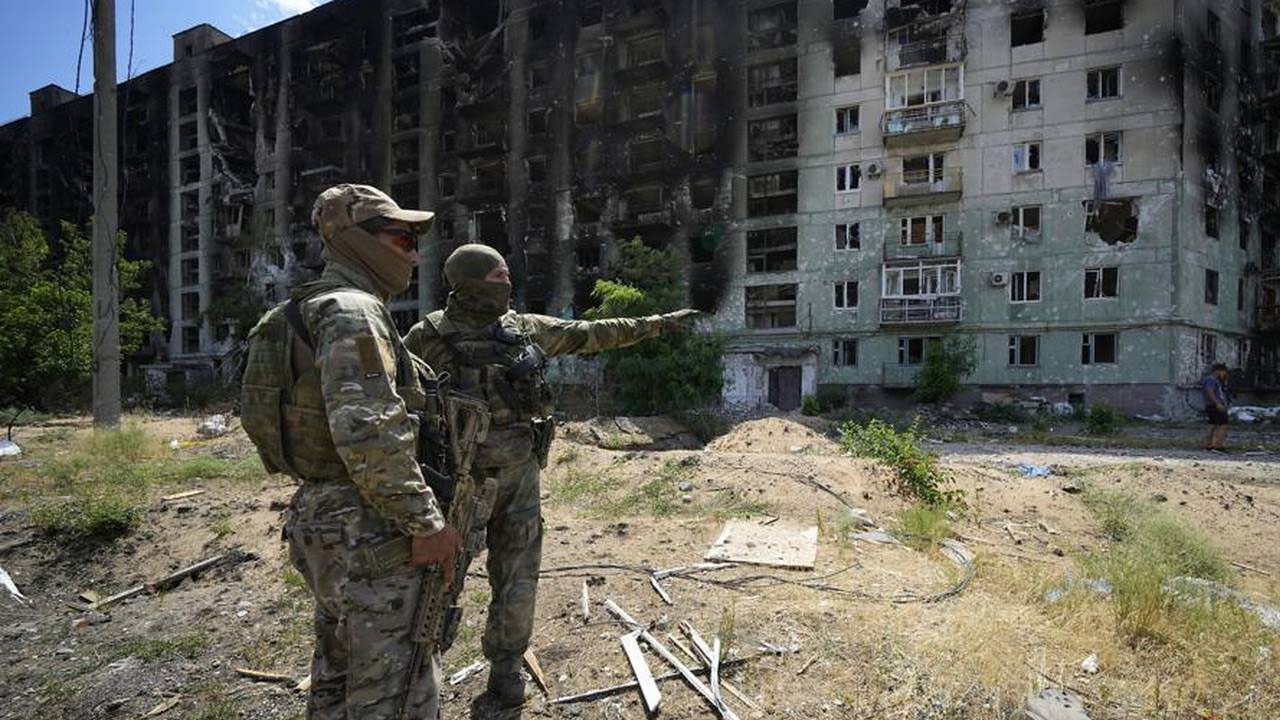 Russian soldiers talk to each other near an apartment building damaged during fighting between Russian and Ukrainian forces in Ukraine.[Source: NZ Herald]

Ukraine used US-supplied Himars to destroy the military headquarters of notorious Russian private military contractor Wagner, after a Russian state television reporter seemed to give away its location by posting photos online.

A Ukrainian official on Monday confirmed Russian media reports that the base in Popasna, in eastern Ukraine, was targeted by a Ukrainian missile strike.

Some estimated that as many as 100 fighters were killed.

Officials did not comment on rumors that Yegveny Prigozhin, the head of the Wagner group who is known as “Putin’s chef”, had also been killed in the strike.

Speculation over Prigozhin’s death was fueled on Sunday by a Donetsk rebel official, who claimed a friend had said Prigozhin was missing.

Footage and videos from the scene showed a bombed-out residential building that was apparently used by mercenaries previously deployed in Syria and Mali.

“We’re digging out our guys in Popasna,” one Russian Telegram channel said on Monday, in a caption for a photo that showed four men carrying a stretcher with a casualty across scattered debris.

Serhiy Gaiday, Ukrainian governor of the Luhansk region in exile, said on Monday that he was waiting for the military to provide the official death toll.

“The news is definitely going to be good, with the figure around 100,” he said.

The attack came a few days after a pro-Kremlin journalist published several photos from a secret base, writing on his social media: “I arrived in Popasna. Went to Wagner’s HQ.

They greeted me like family, told me a few funny stories.”

The Russian reporter also posted a few photos that revealed the exact location of the base.

In one of them, Russian mercenaries were seen standing next to a building with shattered windows.

The address was visible on a plaque near the front door.

In another picture, Prigozhin was seen shaking the hand of a uniformed man.

Several die-hard, pro-war Russian voices on Monday expressed outrage at the Russian state television reporter who was careless enough to post pictures that would make the base easy to geolocate.

“It’s sad that this missile strike that the enemy was able to launch thanks to a thoughtless publication of the current military positions was not the first time it happened.

There’s a long list I can already publish,” said Voenny Osvedomitel, one of the most popular pro-Kremlin Telegram channels, said.

The stunning security blunder led some of Russia’s most reputable open-source researchers wondering whether this was part of an elaborate ruse by Prigozhin.

Ruslan Leviev, head of the conflict intelligence team, said: “When those photos first surfaced and we discussed them at a planning meeting, I said they look too staged… as if [the Russians] were trying to invite a strike at that location.

“Knowing how much Prigozhin likes trolling and how much money he is willing to spend on it, I still have my doubts whether this really happened.”

Leviev suggested that Prigozhin may have set out to get the Ukrainian army to hit the base so that they would have an anti-missile defense ready to shoot down US-provided Himars missiles.

Unofficial reports claimed that the Kremlin was so rattled by the Himars firepower that it promised its soldiers the Hero of Russia medal, the country’s most-coveted military award, for taking out a Himars launcher.