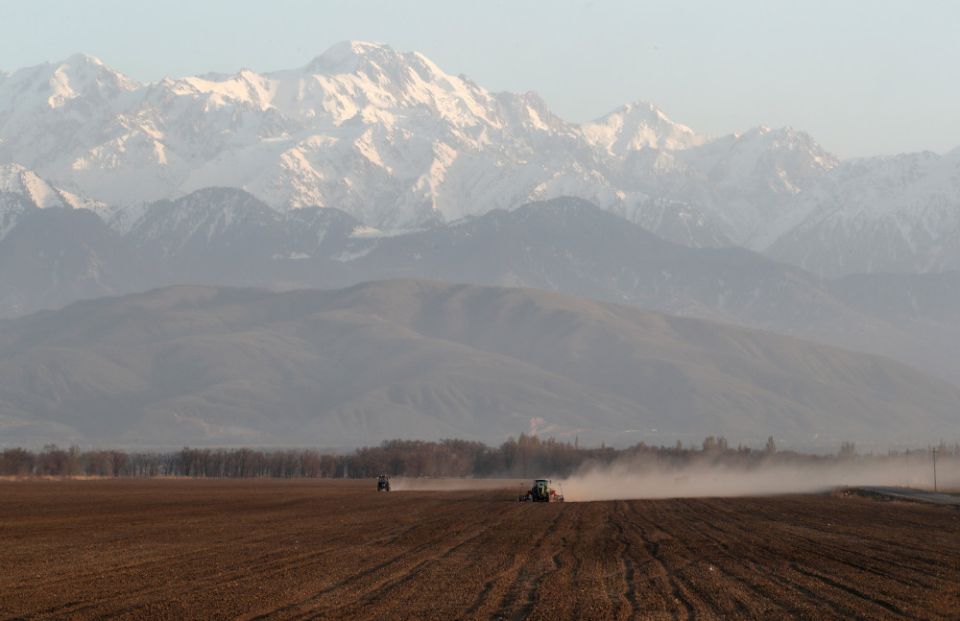 Agricultural workers operate tractors in a field in the Almaty region of Kazakhstan April 6. Pope Francis is scheduled to visit Kazakhstan Sept. 13-15 to attend the Congress of World and Traditional Religions. (CNS/Reuters/Pavel Mikheyev)

Rome — When Pope John Paul II visited Kazakhstan in 2001, less than two weeks after the Sept. 11 terrorist attacks on the United States, the pope made peace the central theme of his trip.

“I wish to make an earnest call to everyone, Christians and followers of other religions, that we work together to build a world without violence, a world that loves life and grows in justice and solidarity,” he said during a Mass on that trip , which came just weeks before the US and coalition allies invaded nearby Afghanistan.

When Pope Francis becomes the second pontiff to visit Kazakhstan Sept. 13-15, history will in some ways repeat itself as war continues to rage in Ukraine. That conflict may loom large over Francis’ visit to the country, which sits in Central Asia about 1,500 miles east of Ukraine and about 1,000 miles north of Afghanistan.

“The motivation of Pope Francis to come to Kazakhstan to make this trip is due to the current, delicate, tragic situation in Ukraine,” said Bishop Athanasius Schneider, auxiliary bishop of Astana, Kazakhstan. 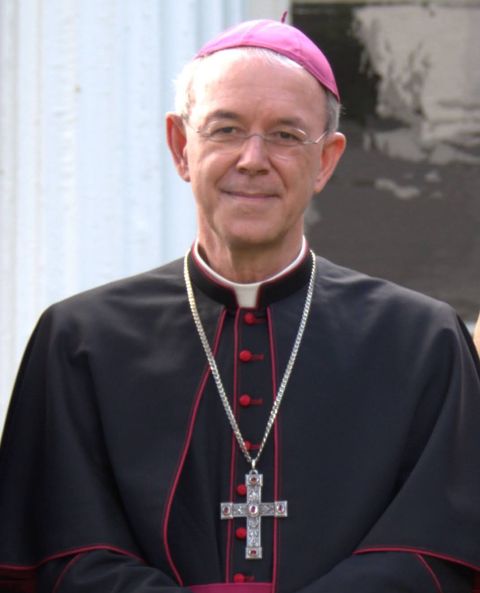 “The message of Pope Francis will be about peace,” he said.

Yet one of the primary figures whom Francis likely wanted to hear that message will not be there.

When the Vatican confirmed last month that the pope would make the three-day trip to Kazakhstan — the 38th international trip of his papacy — for the central purpose of participating in the country’s Congress of Leaders of World and Traditional Religions, Russia’s Orthodox Patriarch Kirill was also set to be in attendance.

The two have met in person once before, in Havana, Cuba, in 2016. In recent months, Kirill has emerged as a key backer of Russian President Vladimir Putin’s war against Ukraine. Since the start of the war in late February, Francis — who spoke with the patriarch via video conference in March — has warned that Kirill should not become Putin’s “altar boy.”

Earlier this summer, Francis called off a planned meeting with Kirill in June in Jerusalem because of the diplomatic fallout it would have created. And then late last month, Kirill pulled the plug on the much-anticipated tête-à-tête in Kazakhstan.

But the 85-year-old pope, who continues to deal with mobility issues due to knee pain, will make the journey anyway.

“He wants to continue what was started by John Paul II,” said Fr. Guido Trezzani, director of Caritas Kazakhstan, who noted that the late Polish pope was also suffering from a number of health issues when he visited the country in 2001, at age 81.

Still, despite poor health and the threat of war at the time, Trezzani recalled in an interview that John Paul insisted on making the trip so that he could offer a message of peace.

The primary venue for Francis to offer that message will be at the Congress of religious leaders, hosted in the Kazakh capital of Nur-Sultan, which has taken place in the country every three years since 2003.

According to Suzanne Owen, a lecturer in religious studies at Leeds Trinity University in the United Kingdom, when it comes to large gatherings of religious leaders, “it’s likely more to do with who will be there” than the actual event.

Despite the physical burden of travel for Francis, “he must think there is some work to be done that he can achieve there,” she told NCR. “It’s more about the behind the scene contacts and conversations than the forum itself.”

For Francis, who has prioritized interfaith outreach and whose most recent papal encyclical, 2020’s Fratelli Tuttiis on “fraternity and social friendship,” a trip to the ethnically and religiously diverse nation of Kazakhstan seems right on cue, according to Trezzani. 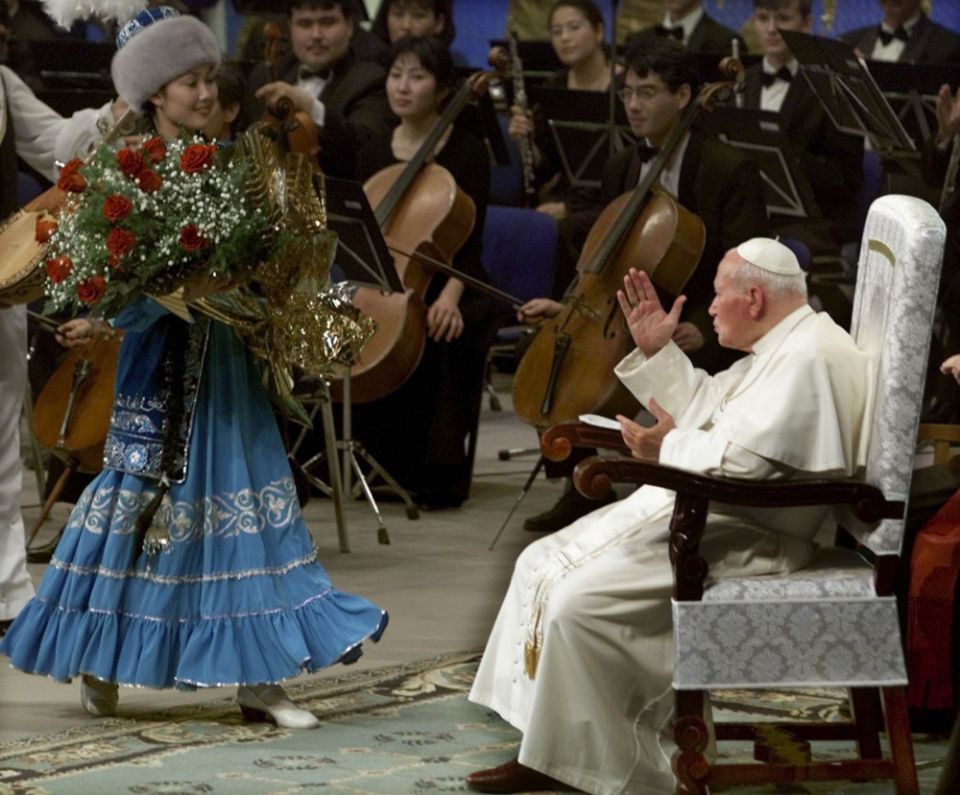 Pope John Paul II blesses a singer following a performance in Astana, Kazakstan, in September 2001. The late pope was on a six-day visit to Kazakstan and Armenia. (CNS/Reuters)

While Kazakhstan ranks as the ninth largest country in the world, its population of less than 19 million people is made up of some 70% Muslims; roughly 1% are Catholic. On the second day of the trip, Sept. 14, the pope will celebrate a Mass for an estimated crowd of 3,000.

Trezzani said the trip should help the Kazakh people “to have a more realistic idea of ​​what the church is, who is the pope and the meaning and role the Catholic Church is playing in the world.”

Schneider, who spoke with NCR via email, noted that Kazakhstan is home to residents from over 130 nations and ethnic groups and that the pope’s presence and message will help the country “strive for peace and to promote a coexistence among many people.”

(In recent years, Schneider has been an outspoken critic of Francis, often allying himself with former Vatican nuncio to the United States, Archbishop Carlo Maria Viganò, who has called on the pope to resign. Schneider declined to respond to questions regarding his personal thoughts on the pope’s visit.)

The bishop noted that under Soviet rule in Kazakhstan, the Communists actively persecuted religious believers, including Catholics, and “people living today still remember this.”

By 1937, not a single Catholic priest remained in Kazakhstan, but today, the country is home to Catholics from a range of nationalities, including Poles, Germans, Lithuanians and Ukrainians, among others. As Francis visits the vast nation, he is expected to bolster their efforts towards coexistence and encourage the country to offer a witness of peace to a world at war.

“Now we are able to give an example of how people of so many different religions and nations can live together and respect one another,” said Schneider.

Enter your email address to receive free newsletters from NCR.