In the wake of Russia’s Feb. 24 invasion of Ukraine, US law firms and corporations have made major operational changes in response, including closing offices and ending business operations in Russia. Bloomberg Law’s second State of Practice survey, conducted in June and July, gave attorneys the opportunity to weigh in on what (if anything) their employers did in response to the war.

Every single attorney whose employer had business operations in Russia before Feb. 24 said their legal organization curtailed business or development in some way. But only half said they were satisfied with what their companies had done.

The survey’s Russia–Ukraine war-related questions were optional for survey-takers, and 159 of the 383 total respondents opted to answer the question asking if their organization has, or ever had, operations in Russia. Approximately 20% of these respondents worked for legal organizations that did business in Russia before the war began. This amounts to 32 attorneys—19 at corporations, 11 at law firms, and 2 at not-for-profits. A group that size is certainly not a quorum of the industry, but it still provides a good glimpse into the ways organizations have handled the ongoing crisis. 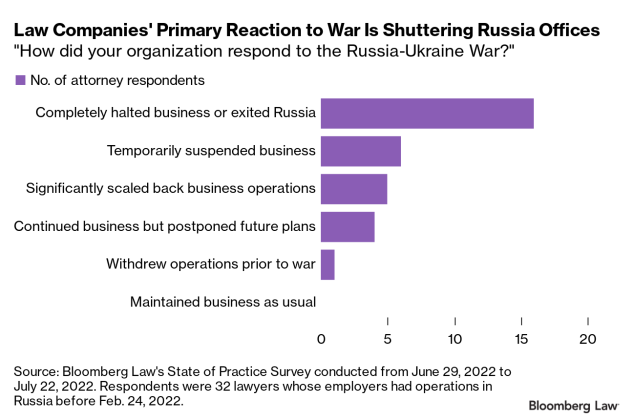 Even though withdrawing from Russia was likely financially difficult and emotionally painful as companies severed ties with longstanding colleagues, these responses are not surprising, given the risk of international sanctions and a general sense—as Winston & Strawn put it in a March public statement—that exiting was “simply the right thing to do.”

Such public statements on the war were common among the survey respondents’ organizations, with 23 of the 32 respondents saying that their companies made public statements about the war either before or after curtailing business operations or plans. However, eight respondents noted that their organizations provided no statement (and one respondent declined to answer the question). Considering the real threat to the physical safety of those attorneys located in current or former Russian offices, refraining from making a statement—or making a statement only after Russian operations have been halted—makes sense from an employer’s point of view. 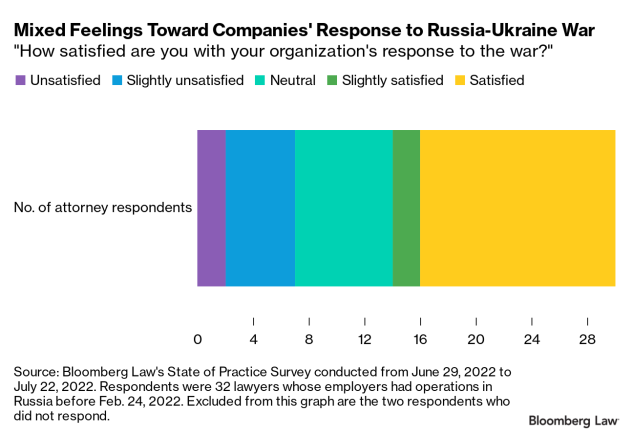 Respondents did not say whether they thought the Russian responses were unsatisfactory because they went too far or because they did not go far enough. But what could be driving the mixed satisfaction levels, at least in part, is the effect that their organizations’ actions are actually having on business operations. For those attorneys who reported any impact (respondents could also select “not sure” or “no impact”), the negative impact appears to outweigh the positive. 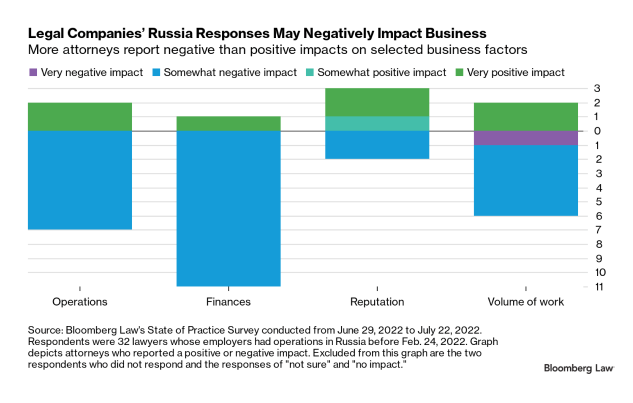 Although more attorneys saw the impact on their organization’s reputation as positive than negative, the balance of responses regarding finances, operations, and volume of work were decidedly negative.

Tied to Ukraine at Home, But to Russia at Work

At the start of the Russia-Ukraine war, I worked for a law firm that had a Russian office. After the conflict began, my employer pulled out of Russia and publicly announced its withdrawal and its support of the people of Ukraine.

As someone who has been through this process, I can identify with those attorneys who expressed dissatisfaction with their organization’s response to the Russia-Ukraine war. I was at least somewhat satisfied with how my company responded to the war. But my workload—though still manageable—dramatically increased as a result of taking on work from colleagues who were swamped with transactions related to the Russia office closure.

The conflict itself also personally hit close to home. My husband is half-Ukrainian—his 103-year-old grandfather fled Ukraine during World War II. Our hutch holds pysanky (Ukrainian easter eggs), and we make varenyky (pierogies) for Christmas. Knowing that my former firm still had (for a time) business in Russia after the conflict began was challenging for me. If others were in similar situations, it is possible this caused a general dissatisfaction with the situation, even if an attorney may otherwise be satisfied with their company’s response to the war.

As time goes on, some organizations that pulled out of Russia may resume operations there. Some may wait until the war ends (assuming there is an end), and some may return to business as usual sooner than that.

Prior to making such a decision, it is advisable for organizations to survey their attorneys for their opinions on any re-engagement. As lawyers leave or switch jobs during the Great Resignation, companies should make sure they are not giving their employees another reason to jump ship.

If you’re reading this article on the Bloomberg Terminal, please run BLAW OUT hereto view the web version of this article.