Welcome back to Foreign Policy‘s SitRep! If you’re having a bad work week, hopefully you can channel some of the “good luck” that Muhoozi Kainerugaba has had: The commander of Uganda’s land forces was sacked by the president (his dad, by pure coincidence surely) after tweeting a threat to invade Kenya. But it’s not all bad for the young ‘un. His father, Yoweri Museveni, then turned around and promoted him to the rank of general. One step back, two steps forward, everybody.

Alright, here’s what’s on tap for the day: Russia’s botched invasion of Ukraine is unnerving Central Asia, North Korea is launching even more missiles, and Putin is set to turn 70, just in time for the Nobel Peace Prize announcement. (Don’t count on him taking home the bacon, though.)

If you would like to receive the Situation Report in your inbox every Thursday, please sign up here.

So it turns out launching a full-fledged invasion of a country next door on wholly false pretenses, completely botching the invasion, and then barely lifting a finger to resolve two other deadly military flare-ups nearby doesn’t really do much for your neighborhood reputation.

Russian President Vladimir Putin is learning this lesson the hard way in Central Asia. Even as the Kremlin tries to counter the West’s efforts to diplomatically isolate it on the global stage, it seems to be losing ground in the one region it should be able to count on most.

Despite their significant economic and political ties with Russia, none of the five Central Asian countries—Kazakhstan, Kyrgyzstan, Tajikistan, Turkmenistan, and Uzbekistan—sided with Russia on a pair of landmark UN resolutions condemning the invasion of Ukraine back in March and April, an early bellwether of how unnerved the region was over Russia’s decision to go to war in another post-Soviet country.

The old sheriff in town. “In the long term, Russia’s gamble in Ukraine could also have planted the seeds of a rapid decline of its influence over Eurasia,” Janko Scepanovic, an academic and expert on the region, wrote in a recent piece for the diploma. “The Russian army’s poor performance in Ukraine and the recent successes of Ukrainian forces in reclaiming lost lands cast doubts on its prowess as a powerful military power or as a sheriff of Eurasia.”

There are other signs that Central Asian countries aren’t so keen on staying in Russia’s orbit in the way they used to, some more cautious and subtle than others. Kazakhstan has steadfastly refused to recognize the breakaway regions of Ukraine run by pro-Russia puppet governments. This week, the Kazakh government sparked another diplomatic row with Moscow by refusing to kick out Ukraine’s ambassador, a move that enraged Russian diplomats.

Elsewhere, Uzbek President Shavkat Mirziyoyev sharply denounced Soviet-era repression of his country in late August, at a time when Moscow is trying to whitewash Russia’s Stalinist past. (He’s also apparently working to strengthen ties with China at the same time.)

Let’s get petty. As always when it comes to the snooty and buttoned-up world of international diplomacy, you also have to pay attention to the petty, passive-aggressive stuff to draw out the pattern. Take last month’s Shanghai Cooperation Organization (SCO) meeting in Samarkand, Uzbekistan.

At the big SCO confab of Eurasian leaders, Mirziyoyev made a point to personally greet Chinese President Xi Jinping on his arrival while sending only his second in command to greet Putin. Then, Putin—notorious for making his own VIP guests wait hours to meet him in a vintage Kremlin power move—was himself left waiting for meetings with the leaders of Turkey and Kyrgyzstan. Ouch.

“There is growing friction between the Kremlin, its proxies and local Central Asian elites,” Paul Stronski, an expert on the region, told the Moscow Times after the SCO conference.

Showing up is half the battle. Three other factors are undermining Russia’s role as the regional security power. First, in two recent and separate deadly military confrontations—violence between Armenia and Azerbaijan and border clashes between Kyrgyzstan and Tajikistan—Russia was nowhere to be seen.

It has in the past used the Collective Security Treaty Organization, an ersatz, wannabe NATO-type organization that Russia nominally leads, to help quell these conflicts and broker disputes. Not so this time around. Moscow is too consumed with the quagmire in Ukraine to focus on its role as the region’s neighborhood watch.

It’s the economy, stupid. Second, all Central Asian countries are heavily reliant on Russia to keep their anemic economies afloat, through trade, seasonal labor, and remittances. Russia’s decision to invade Ukraine led, unsurprisingly, to sweeping Western and international sanctions and export bans that have squeezed the Russian economy and by extension Central Asian economies. So far, the Central Asian economies have demonstrated some surprising resilience, but they still face inflation and surging energy and food prices, and they have the Kremlin to thank for it.

China is clearly the region’s economic powerhouse, thanks in no small part to its ambitious Belt and Road projects there, while Russia, with a GDP roughly around the size of Spain’s that is now sanctioned to the hilt, doesn’t seem quite as attractive an economic partner as it did before the war.

Finally, there’s Putin’s terrible, horrible, no good, very bad conscription campaign. Russia’s efforts to mobilize at least 300,000 conscripts to stem the losses in Ukraine has, tragically and unsurprisingly, turned into a campaign to round up Russia’s ethnic minorities—including Central Asian migrants—and rush them to the Ukrainian front lines as little more than cannon fodder . (There are painful historical parallels here to the gruesome and oft-forgotten “Urkun” tragedy in World War I, when tsarist troops massacred up to 270,000 Central Asians who revolted when they were being rounded up to fight for the Russian Empire in 1916.)

The conscription campaign has also led to a mass exodus of Russian men, including tens of thousands to Georgia, Armenia, and Central Asian countries that are now under a new form of economic and political strain from the massive migration influx.

Central Asia’s economic ties to Moscow won’t dissipate overnight, and the region’s leaders are trying to carefully stay on the fence during the conflict, even as they send signals they aren’t too pleased about it, but it’s clear Moscow’s status as the star player in Central Asia is beginning to evaporate.

Michael Schiffer you have been sworn in at the US Agency for International Development as the assistant administrator for Asia. Schiffer was previously a longtime Capitol Hill staffer and US Defense Department official.

Kelly Fletcher has been named as the US State Department’s new chief information officer.

US President Joe Biden has tapped Surgeon General Vivek Murthy to serve as the US representative on the executive board of the World Health Organization. Murthy will continue to serve in his old role.

What should be high on your radar, if it isn’t already.

North Korea launches more missiles. North Korea launched another salvo of short-range missiles Thursday, just after the United States deployed a carrier strike group to the region amid renewed tensions. The latest firing of two missiles, marking North Korea’s sixth round of weapons tests in just two weeks, comes after another missile test overflew Japan earlier this week, prompting the Pentagon to move US military assets into the region.

Drone war. The Russian military used self-destructing Iranian drones to attack a town in the Kyiv suburbs Wednesday night, a growing menace to Ukrainian forces that has led them to call for increased weapons deliveries. The Republican minority on the House Armed Services Committee used the news to call for the Biden administration to send the long-range US Army Tactical Missile System to Kyiv, which the United States has held off on doing for fear of escalating the conflict beyond Ukraine.

OPEC cuts. OPEC and non-OPEC partners moved to cut deeply into oil production on Wednesday, Robbie and FP’s Anusha Rathi and Christina Lu reported, a move that could hamper the Biden administration’s efforts to keep prices down amid Russia’s ongoing invasion of Ukraine.

The cuts will amount to 2 million barrels per day, according to an agreement struck in Vienna, although with many OPEC members already producing at levels below quotas, the cuts are likely to take fewer barrels off the market. Despite the Biden administration’s demands to keep production moving, cartel members said the looming possibility of a global recession was pushing them to make cuts. 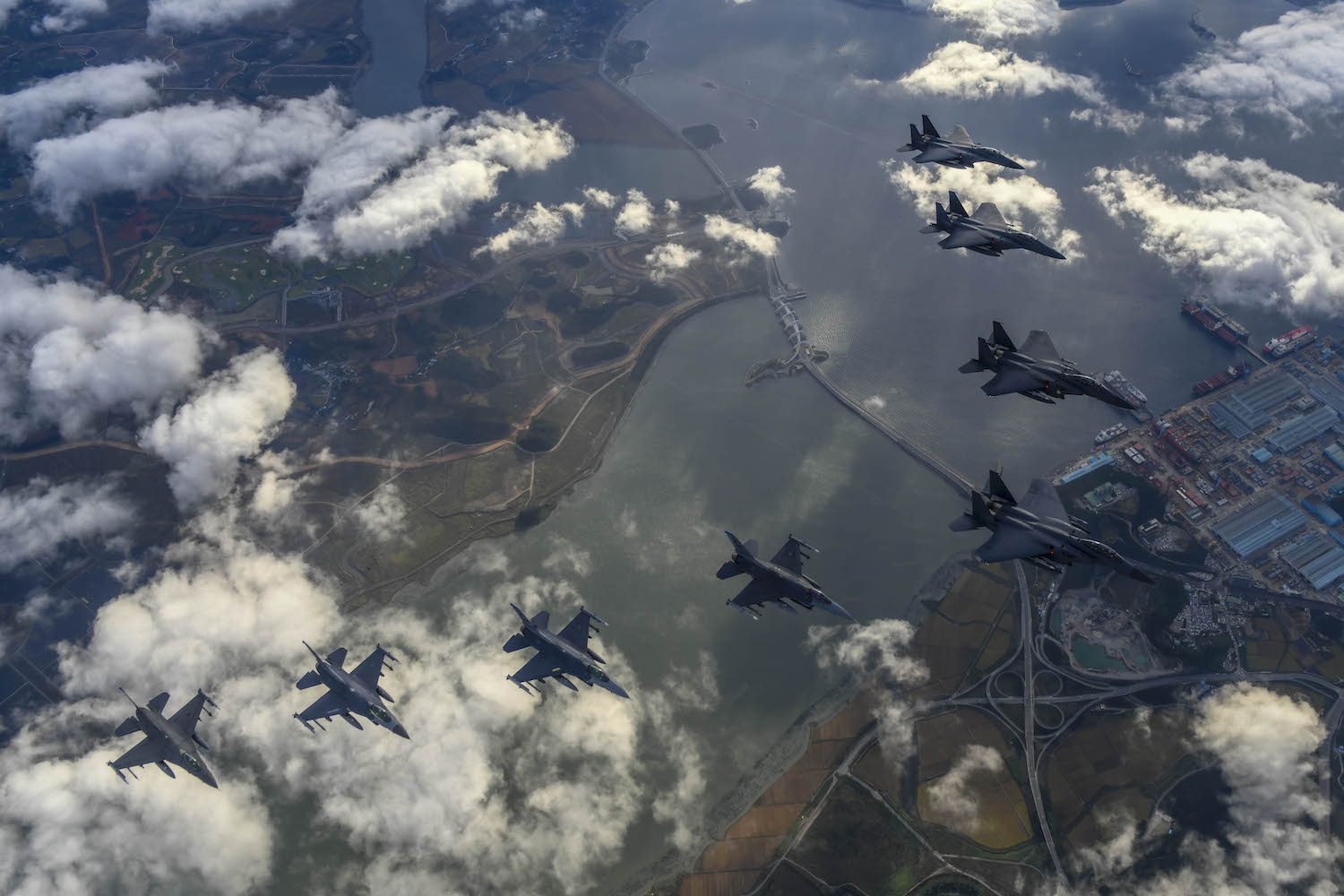 An aerial view of fighter jets flying in the clouds.

“Fuck off is my very diplomatic reply to you @elonmusk.”

Sham referendum. If the Kremlin thought there wouldn’t be a response to Russia’s trumped-up annexation vote in four Ukrainian territories last month, it was mistaken. An online petition calling for the Czech Republic to annex the Russian exclave of Kaliningrad has more than 17,000 signatures.

Make a wish. If you’re like most of us, you celebrate your birthday by blowing out candles on a cake. But apparently that wasn’t enough for pro-Kremlin Chechen leader Ramzan Kadyrov, who used his cake day to give himself an award for being the Russian under the most Western sanctions. What Kadyrov probably didn’t mention in his festivities was that the sanctions were for his role in suspected extrajudicial killings, war crimes, and torture.